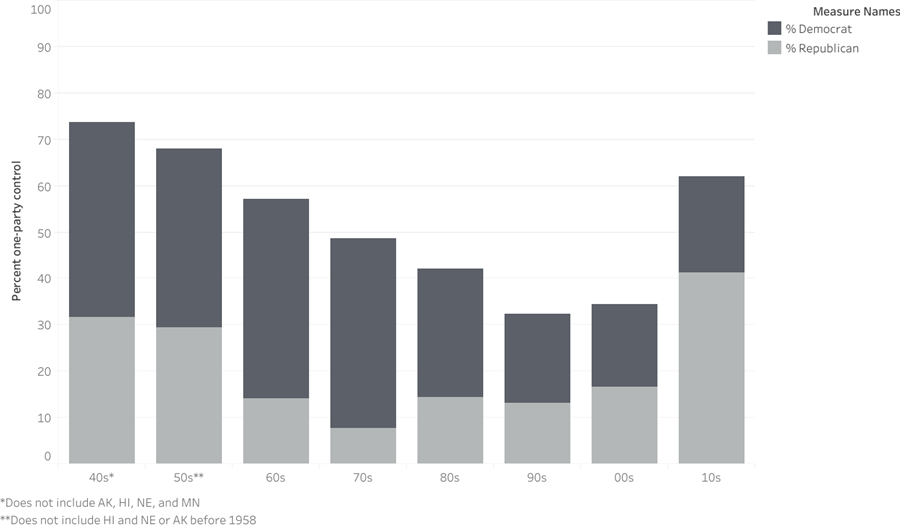 One-party monopolies were common during most of the 20th century. The most recent decade shows a dramatic uptick that favors Republicans.

A new study documents both the long-time frequency and the dramatic resurgence of one-party monopolies in the politics of the American states.

The study — led by University of Arkansas political scientists Janine Parry and Andrew Dowdle — draws upon many indicators of a state's party profile. Specifically, with the help of several students over the last five years, they built a dataset that includes the party breakdown of the state legislature, congressional delegation, and popular votes for governor and president for every state between 1935 and 2020.

Averaging these values for any given year — or across decades — yields a score of between zero and one. Arkansas, for example, consistently scored above 0.6, making it solidly Democratic, through 2009. By 2014, it had fallen to 0.28. Today, it is 0.18, making it one of the most Republican in the country.

While Arkansas' change was unusually swift, the authors note, its preference for single-party monopoly is not unique. Most states have heavily favored one of the two major parties for at least a century. Among the most uniform and longest lasting of these monopolies are Kansas, South Dakota, and Wyoming on the Republican side, and Hawaii, Maryland, and Rhode Island on the Democratic side.

After signs of greater two-party competition in the 1990s one-party monopolies have rebounded, Parry said.

"Most observers of American politics perceive this as a time of intense competition between the major parties for control of our governing institutions and, consequently, the direction of public policy," Parry said. "That is not at all what's actually happening in the elections that matter most: the states."

The study appears in the spring volume of State Politics and Policy Quarterly.

This announcement of Parry's and Dowdle's publication is particularly timely: The final day to register to vote in the 2022 Arkansas election is today, Tuesday, Oct. 11. If you have not yet registered to vote, please visit your local county clerk, public library, disability agency, military recruitment office, or DMV/revenue office to register today. If you are unsure of your registration status, you may check it at www.voterview.org.