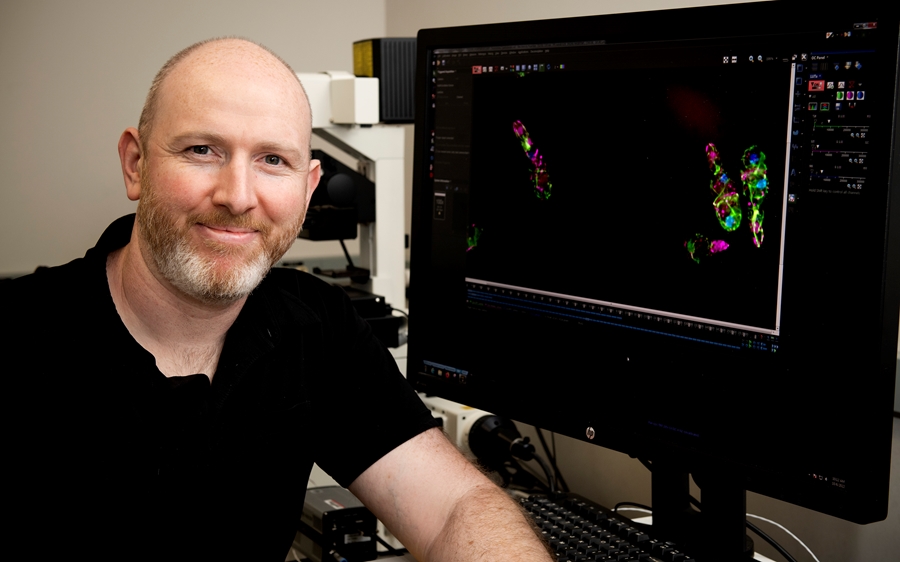 U of A System Division of Agriculture photo by Fred Miller

Martin Egan, assistant professor of plant pathology, was awarded $943,941 as part of the National Science Foundation's Faculty Early Career Development Program to aid in research of the inner workings of Magnaporthe oryzae, the fungal pathogen that causes rice blast.

"Annual yield losses attributed to rice blast disease alone have been estimated to be large enough to feed an additional 60 million people for an entire year," Egan said. "The emergence of fungicide resistance is a growing concern, so there is a need to develop new strategies to control blast diseases. This demands a more complete mechanistic understanding of the pathogen's infection biology."

Ken Korth, head of the Department of Entomology and Plant Pathology in the Dale Bumpers College of Agricultural, Food and Life Sciences, said the rice blast pathogen is "one of the most important enemies of food production worldwide." Rice blast causes lesions to form on all parts of the rice plant and can lead to decreased yield or complete crop failure depending on the severity of the disease.

Arkansas is the top rice-producing state in the nation with over 1 million acres of rice planted in 2022. The fungal pathogen has also recently affected wheat crops in parts of Asia, Egan added.

"Dr. Egan's National Science Foundation award is a prestigious honor and shows the importance of his research on the pathogen that impacts agriculture not just in Arkansas but around the world," said Jean-François Meullenet, director of the experiment station and senior associate vice president for agriculture-research. "The work he is doing will provide a foundation for developing methods to control a pathogen species that has the ability to cause significant economic damage. We are proud of Dr. Egan's accomplishments and look forward to his discoveries."

A 2018 U of A Innovation Fund grant of $110,332 awarded to Egan and Yong Wang, assistant professor of physics at the University of Arkansas, provided funding to generate the preliminary data on M. oryzae that led to the National Science Foundation grant, Egan said. In their studies, Egan and Wang used high-powered microscopes to photograph the pathogen as it infected a rice plant.

"Martin's research group has been producing world-class microscopic images of the early infection events on rice," Korth said. "This is vital information when we try to devise strategies to control plant diseases."

Work to be done

The long-term goal of Egan's research program is to gain further intelligence into the molecular mechanisms of Magnaporthe oryzae's invasion forces.

Carried by the wind, fungal spores attach to a host plant and quickly form specialized, dome-shaped cells called appressoria. Each appressorium builds a powerful type of hydrostatic force called turgor pressure that drives a kind of "infection peg" through the plant's cuticle aided by a ring-shaped structure built from septins, a class of cytoskeleton proteins.

The cytoskeleton is a dynamic network of protein filaments and tubes that helps cells maintain their shape and internal organization. It also provides mechanical support that enables cells to carry out essential functions like division and movement.

The appressorium can build up enough turgor pressure to penetrate Kevlar, Egan said. But it does not penetrate the plant without the septin ring. In experiments in which the septin ring was disrupted, the blast fungus was unable to infect the rice plants, he said.

The presence of this septin ring was discovered and described by a research team led by Nick Talbot, at the University of Exeter in the United Kingdom, where Egan earned his undergraduate and doctoral degrees. Talbot is now executive director of The Sainsbury Laboratory.

Egan has built on Talbot's septin ring findings, revealing how cytoskeleton filaments called F-actin are recruited to the edge of the fungi's attacking septin ring to remodel it for plant invasion.

Egan says that despite progress made since the septins were discovered in budding yeast cells about 50 years ago, the proteins "remain poorly understood" compared to other major cytoskeleton proteins involved in the framework of the organisms even though they play important roles.

"The NSF Career Award will enable us to dig deep into the sub-cellular organization of this infection structure with the long-term goal of informing new control strategies," Egan said. "As it forms on the leaf surface, a lot of the cytoskeleton components that I'm interested in need to be remodeled and this research will give us a better understanding of how that is coordinated in time and space."

To study the fungus on the molecular level, Egan gene-edits the fungus to give specific proteins fluorescence and then takes photographs of it attacking plants through high-powered microscopes. Egan's lab features a Nikon Eclipse Ti-E widefield deconvolution microscope, and he also has access to a Leica Microsystems STELLARIS 8 laser scanning confocal microscope. The Leica was acquired in 2021 through a U.S. Department of Agriculture National Institute of Food and Agriculture grant with others in the department of entomology and plant pathology.

Teaching and mentoring components are part of the National Science Foundation grant. Egan will provide education and training opportunities for students, researchers and faculty within the University of Arkansas System on the state-of-the-art microscopes. The grant also supports mentoring through the Upward Bound program, a college preparation and access program for low-income, first-generation, and minority students funded by the U.S. Department of Education.

To increase participation in science by minority scientists and foster new collaborations, the NSF grant funds two annual merit-based travel grants to students and faculty within the departments of biology and agriculture at the University of Arkansas-Pine Bluff to conduct research using the microscopes.

"I am pleased to see that this award also addresses some of our diversity goals and like to see this type of meaningful partnership with our 1890s Land Grant institution," Meullenet said.

Korth said the funding for the educational component will provide the opportunity for students to gain hands-on experience in research programs.

"This sort of exposure is critical as we work to prepare a diverse population of students for careers in science and technology," Korth said.

To learn more about Division of Agriculture research, visit the Arkansas Agricultural Experiment Station website: aaes.uada.edu. Follow on Twitter at @ArkAgResearch. To learn more about the Division of Agriculture, visit uada.edu. Follow us on Twitter at @AgInArk. To learn about extension programs in Arkansas, contact your local Cooperative Extension Service agent or visit www.uaex.uada.edu.