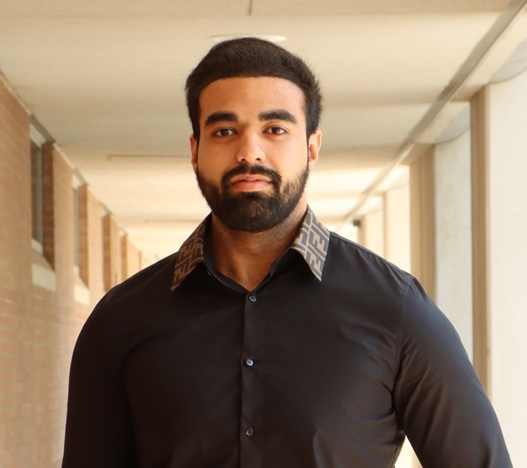 Junior Muhammad Ali Muhammad has been selected as the Student Leader of the Month for September 2022. Originally from Islamabad, Pakistan, Muhammad came to the U of A to study poultry science with a minor in agricultural business. He is currently involved with the Volunteer Action Center, the Poultry Science Club, the Agriculture Future of America, and he is a cross-cultural mentor.

Muhammad got involved in these organizations to give back to the community that has accepted him as an international student. He wanted to be involved in his major and be alongside other current leaders.

"Since I am an international student, I know what it feels like, and I want to make it as easy as possible for the incoming students," he said.

Muhammad believes that every great leader must have a vision and an ambition for the task. He believes you need the courage to speak up and have the heart to embrace it, even if it is rough. He emphasized the importance of how many lives will be affected by your decisions.

His advice to other students is to do what you believe in, even if nobody has ever done it before: "It may be hard in the beginning, but the reward gets better and better."

He said he has always been his own mentor and did what he believed was best. He has faced obstacles where others did not believe in him, and this encouraged him to prove that his word is his promise.

The Student Leader of the Month award, sponsored by New Student & Family Programs, recognizes U of A undergraduate students for their excellence in leadership through campus involvement, leadership activities or through volunteer and community service.