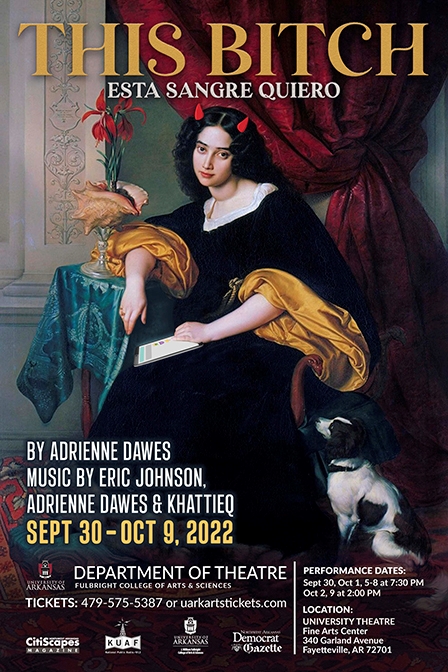 This Bitch poster by Ash Micheel

The Department of Theatre opens its 2022-23 season with This Bitch: Esta Sangre Quiero by M.F.A. playwright candidate Adrienne Dawes, directed by guest director Estefanía Fadul. A big, bawdy, bilingual Gen Z comedy the play explores the lives of the instafamous and their entourage. The comedy opens Friday, Sept. 30, at the University Theatre. Tickets are available online at uarkartstickets.com.

Diana Bianca, a ruthless and power-hungry Pilates influencer, is a first-time featured headliner at El Summit — an immersive music and wellness festival located in Tulum, Mexico. Poised to take her personal brand to the next level, she discovers that her smooth-talking social media manager Teodoro has hooked up with her makeup artist Madeinusa, sparking unwanted jealousy.

Even though it would be social suicide to date someone with zero followers, Diana finds she has "disgusting feelings" of authentic love, but if she can't have Teodoro ... no one can.

Inspired by Lope de Vega's Spanish Golden Age comedy, El perro del hortelano (The Dog in the Manger), the play was started in a graduate playwriting workshop focused on adaptation. Dawes updates the original, setting it on the beaches of a resort in Tulum, Mexico and includes most of the play's original characters who now vie for status on social media instead of the court of Belflor.

"It's a wickedly clever and whip-smart adaptation and I'm thrilled Adrienne put this forward as her thesis production," said John Walch, associate professor in playwriting.

A thesis born during the pandemic

Dawes began the play in January 2020, just before COVID lock-down and as social isolation became the new normal. Seeking escape, Dawes said "I firmly dug my heels into the sands of my imaginary Tulum beach resort to build a playground for this ensemble ... I saw only the people I wanted to see onstage: a diverse ensemble of beautiful, funny, and vulnerable humans stumbling either towards or away from love in the most surprising and tender ways."

The play features a diverse ensemble of 16, original music, and text directly from Lope de Vega's play (performed in Spanish). Guest director, Estefanía Fadul, was brought to campus to navigate all the intersections.

"This is a rich, epic, sharp world—while fun and zany, it digs deep into big questions about human nature and our social structures today," Fadul said.

Adrienne Dawes (she/her/hers) is an Afro-Latina writer, producer, and teaching artist originally from Austin, TX. She is a M.F.A. candidate in playwriting in the Department of Theatre. This workshop production of This Bitch: Esta Sangre Quiero is in partial fulfillment of her thesis. This Bitch has received developmental support from Theatre Lab at Florida Atlantic University, Sin Muros: A Borderless Teatro Festival at Stages Repertory, Teatro Vivo, B Street/In the Margins Theater, and funding support from Alternate Roots. The play was recognized for Distinguished Achievement by the Kennedy Center's American College Theater Festival, it was a semi-finalist for the 2022 Lanford Wilson New American Play Festival, and it is a current semi-finalist for the 2022 NBC/Nosotros Org Ya Tu Sabes Monologue Slam.

This Bitch: Esta Sangre Quiero by Adrienne Dawes includes music by Eric Johnson, with lyrics by Adrienne Dawes and Lope de Vega (adapted by khattieQ), and is directed by Estefanía Fadul. Performances run through Oct. 9 at the University Theatre.

Tickets reservations can be made online at uark.universitytickets.com (free tickets available for UARK students) or contacting the U of A Centralized Box Office at 479-575-5387.