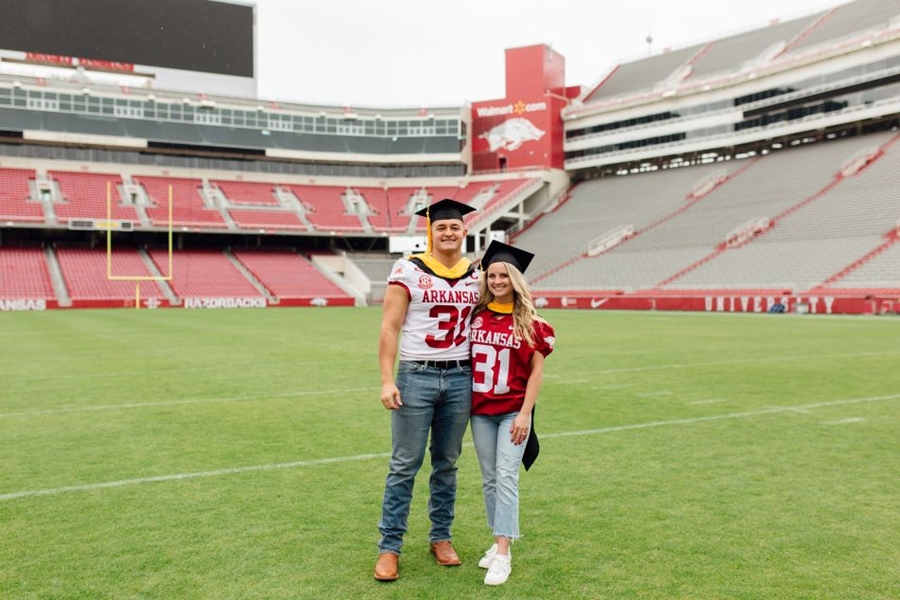 In March 2021, Sydnie Morgan was in the last semester of her master's degree program in speech-language pathology and serving as a graduate assistant for the U of A Athletic Department. Her football-playing husband, Grant, had just ended an incredibly successful and defining year with the Razorbacks.

The 24-year-old was also celebrating the end of her mother's chemotherapy treatments after a year-long battle with breast cancer.

On paper, everything was coming up roses. But in the background, Morgan was grappling with how she should handle some recent news: she was also at high risk for developing breast cancer. Up to an almost 90 percent increased risk. Like her mom, she was positive for the BRCA 1 gene mutation.

"These genes can have mutations, allowing cancer to develop," Morgan explained. "Individuals who inherit either of these mutations have increased risks of developing several types of cancer, most notably breast, ovarian and pancreatic cancer. I have one sibling, a sister, who thankfully did not inherit the gene."

Not If, But When

After much deliberation, Morgan decided to have a double mastectomy.

"I went back and forth about what to do, to be honest," she said. "I didn't want to be a burden to those around me. I didn't want to bring more fear to my family after going through everything with my mom so recently. However, I soon found that I was doing the exact opposite. After the doctors told Grant and me, 'It's not if, but when,' I knew we had to do something."

For Morgan, knowledge was power. "I soon found myself thinking I would be selfish if I didn't act. I didn't want to put my family through heartache if I were to be diagnosed, when I could've done something to try to prevent it."

She posted a pre-operation selfie on Instagram with the message, "For those who didn't have this option. For my mom. For my family. For my future family. For my friends. For anyone who needs this. For me. Let's do this!!"

The weeks following the surgery were spent emptying drains, lying at an angle and trying to distract herself from the fact that she couldn't engage in her usual hustle and bustle way of life.

"It was hard. In hindsight, I would say the mental aspect for me was much harder than the physical," Morgan said. "I was a college athlete once. I've had both ACL surgeries, a metal plate put into my arm after breaking my ulna from getting hit by a pitch, as well as many other injuries over the years."

After this surgery, she looked different. And felt different.

"It was hard for me, as I had nothing to do but sit with my thoughts," she recalled. "I fully thank and credit God, my husband, parents, family and friends, and my U of A faculty and cohort who helped me get through those dark times."

Morgan was soon back on her feet and finishing up clinical and coursework in her grad program. She graduated with her master's degree in speech-language pathology in May. Her husband graduated with a Master of Science in Operations Management. This summer, the young couple moved to Jacksonville, Florida, after he signed with the Jacksonville Jaguars.

Morgan found a job she loves at a private pediatric clinic. She also provides services to students at several local elementary schools.

"Serve fervently" is Morgan's motto. "I am very thankful that I discovered my purpose in life at such a young age," she said. "After volunteering with many organizations and public school districts across Arkansas throughout my undergraduate career, I knew where my heart was leading me: pediatric speech-language pathology."

Her experience working with individuals from various multicultural and socioeconomic backgrounds in Arkansas solidified her commitment to the field. But she also had a personal motivation to pursue her dream career.

"My husband's adopted 6-year-old sister was born with a hearing deficiency," Morgan said. "We began fostering her at only a few months of age and noticed that her hearing was not normal compared to her typical hearing peers. After many appointments and meetings with an audiologist, our concerns were validated."

The diagnosis led to multiple therapy sessions with audiologists and speech-language pathologists.

"To see her growth over the years has opened my eyes to how life-changing our field can be for individuals," Morgan said. "I want to serve children who live with communication disorders. I want to give children the independence and ability to find their voice: verbal, non-verbal, augmentative or other. Children deserve a voice, and I want to help them achieve that."

Sydnie and Grant began dating in 2013, were engaged in 2018 and married on Jan. 4, 2020. Sydnie played softball for Arkansas Tech University as an undergrad, while Grant continued his academic and athletic career at the U of A. Those years apart were challenging, especially since both were college athletes. After she graduated from ATU in 2019, Sydnie moved to Fayetteville to join Grant. She began a one-year post-baccalaureate program in communication sciences and disorders, then started the graduate program in August 2020.

So, what's it like to be married to a U of A football player? Sydnie Morgan laughs. "A journey. The biggest roller coaster ever, but we have been blessed with the most incredible opportunities, memories, experiences and lessons we will carry with us forever," she said. Grant Morgan started his football career at Arkansas as a walk-on. He was awarded a scholarship in 2018, a big relief for them both. He helped lead the team to one of their best finishes in a decade before graduating, was a two-time team captain, an All-American, an All-SEC, Burlsworth Trophy winner, College Football Hall of Fame recipient and Collegiate Man of the Year finalist, among many other accolades and nominations.

"He would be so mad I included all that, but I'm the wife, so I can brag every now and then," Sydnie Morgan said. "I don't include the awards to show how incredible he was during his time here, but more as an encouragement for those who have been told they weren't good enough. Not only in sports. His story can be applied to many different areas in life."

Morgan said they are thankful for the platform that football has provided, and they want to serve people the best way they can. "In the coming years, we can't wait to show everyone what we are putting into place to do just that," she said, adding, "Wherever we are, and wherever we go, we will forever be thankful for our time in Fayetteville. It will always be home for us. Wooo pig, forever!"

This story is the latest in a series featuring students, faculty and staff in the College of Education and Health Professions who exemplify the college's core WE CARE priorities. The college is helping solve complex challenges in education and health across Arkansas and beyond with this new initiative. Visit COEHP's online magazine, the Colleague, for more news from the six units that make up the college.