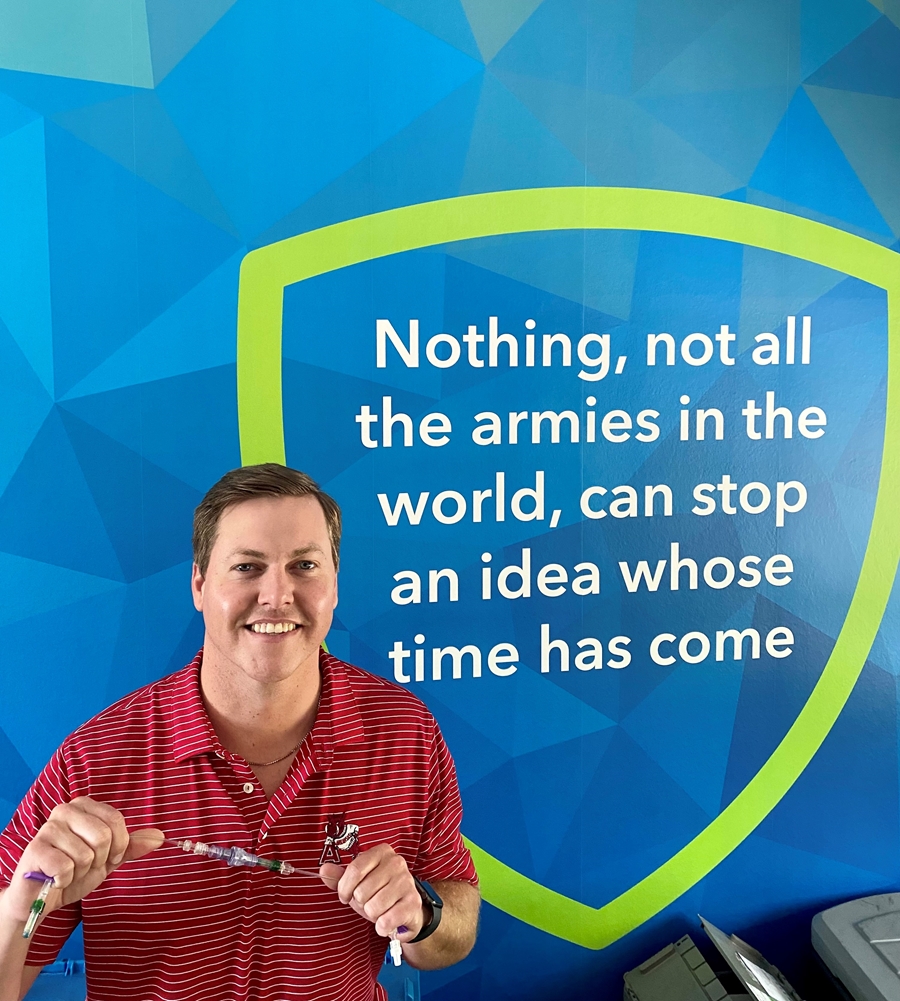 Spencer Jones, an alumnus of the Eleanor Mann School of Nursing, was working the night shift on a busy medical-surgical floor when the idea for a breakaway device for IV catheters was born.

"I would routinely have five to six patients at a time. Virtually all of them had IV catheters, and it felt like they were constantly failing," he said. Most of the time, the tubing was getting pulled out, which happened for various reasons: patients tripped over the tubes, they would catch on a door handle in the bathroom, or they'd snag on a bedrail during transfers to wheelchairs or gurneys.

"It was frustrating because I didn't have any tools at my disposal to prevent these complications from happening," he said.

Jones knew breakaway devices were used at gas station pumps and for magnetic laptop chargers. "So, the concept wasn't new. It was just a new application of an existing concept," he said.

His patented and trademarked SafeBreak Vascular technology — which allows nurses to quickly switch out failed IVs without a new catheter or additional needle sticks — was approved by the FDA in May 2022. It took three years.

"That was probably one of the happiest moments of my life. I cried as soon as we got off the Zoom call with the FDA," Jones said. "It took years longer than we thought it would to get FDA clearance, and I was starting to feel a little imposter syndrome, to be honest. Having to tell friends and investors 'No clearance yet, we're still in regulatory' for three years got really old."

From Scrubs to Sales

While FDA clearance was a massive weight off Jones' shoulders, he had to quickly shift into sales mode, "which any entrepreneur can tell you is equally as challenging," he said.

Jones is the founder and chief technology officer of Lineus Medical, and more than half of his company's employees are either current U of A students or alumni. "Of the nine employees we have, three are alumni and two are students," he said. "We've also leveraged the intern program at the U of A multiple times. It's such a great way to get talented support and a unique learning opportunity for the interns."

The Lineus Medical offices are just down the road from campus, two blocks off the Fayetteville Square. Jones said it's good to be back in Arkansas. He created SafeBreak Vascular while a nurse in Memphis and was accepted into the city's ZeroTo510 business accelerator in 2015. He refined the business plan, developed prototypes and pitched the product to several hospital administrators and clinicians in the Memphis area. He exited the business incubator in August of 2015 and moved to Northwest Arkansas in 2016. Then he began raising seed money to get the company off the ground.

The company filed its first patent in the fall of 2015. Since then, they've been granted three additional patents for SafeBreak. "We've protected different design configurations as well because you're constantly finding ways to improve the design, and it's important to protect the best design, as well as the second and third best designs," he said.

The Business of Nursing

Jones loves that moment when fellow nurses see the technology for the first time at trade shows. "Their faces light up," he said. "Usually, they immediately say, 'I could've used this last week when that one patient tripped on their tubing!' Half the time they say, 'I bet a nurse invented this,' and I get to say, 'Yes, indeed!'"

"A big goal of mine is to drive nursing schools to introduce more progressive design thinking and professional development courses for their students," he said. "I truly believe that exposing young nurses to design thinking and helping them understand the different life science career paths available with their nursing degree will help transform our healthcare system, which is in dire need of change."

This story is the latest in a series featuring students, faculty and staff in the College of Education and Health Professions who exemplify the college's core WE CARE priorities. The college is helping solve complex challenges in education and health across Arkansas and beyond with this new initiative. Visit COEHP's online magazine, the Colleague, for more news from the six units that make up the college. Visit the Eleanor Mann School of Nursing page for more information on COEHP's nursing program.