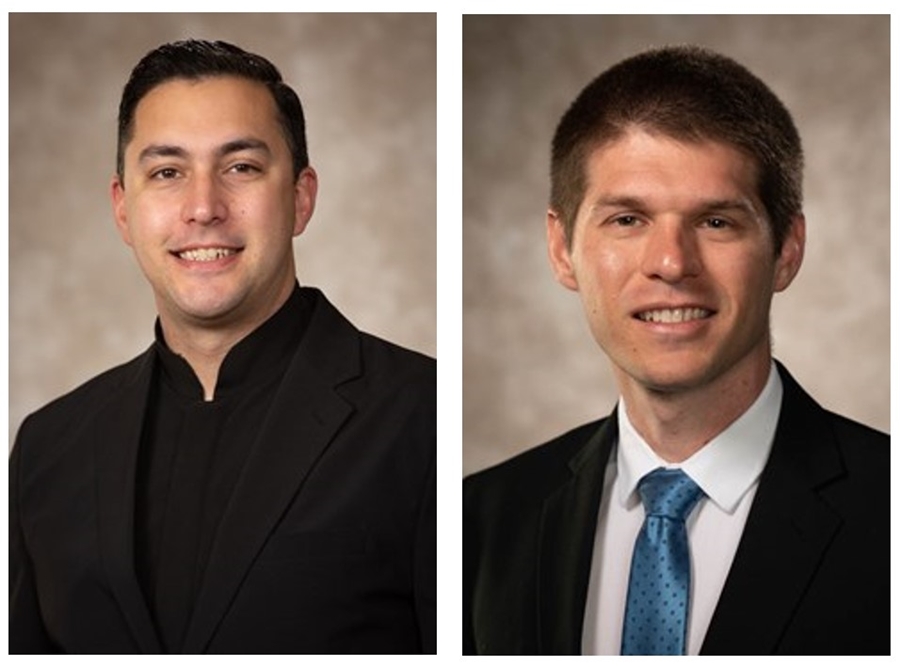 The Fall 2022 season will see new leadership for the Razorback Marching Band and the Hogwild Band, but new roles in the band program doesn't necessarily mean new faces in the Lewis E. Epley Jr. Band Building.

Though moving on from the Hogwild Band, Summers enjoys looking back over the past two years as both the men's and women's basketball team experienced post-season success. With travel to SEC and NCAA tournaments, he and the band's members had an opportunity to see the country from east to west coast. "Austin, Buffalo, Nashville, San Francisco and Tampa — it was a month of non-stop travel," he said. "But I had so much fun, and I felt the students did, too."

Now in a different role for 2022, Summers acknowledges that taking on the title of marching band director for a flagship university can be challenging but ultimately rewarding. He recounted his conversations with alumni band members and realized the impact that his career can have: "It's interesting to hear people talk about their time in the Razorback Band. Almost always they tell you who their band director was and that their experiences meant a lot to them. It's a testament to the long history of great directors in this program."

With Summers vacating the role of director of the Hogwild Band and moving into the director position of the marching band, the program looked to someone with teaching experience and familiarity with the U of A to step in and help with both athletic bands. Chase Jones will serve in those positions during the upcoming year. Originally from Ashdown, Jones earned his Bachelor of Music degree in 2012, serving as drum major for three years and then worked on staff as a graduate assistant while he finished a Master of Music in conducting in 2015.

Returning to his alma mater provided an exciting new step in his career. "The opportunity to come back to Arkansas was one I couldn't pass up," said Jones, who had been teaching the 225-member Sebastian River High School Band in Sebastian, Florida, before he got the call to come home. "I'm from Arkansas, so being a Hog was the only thing I knew. This is home; this is a place that means a lot to me." With the Hogwild Band now in the hands of Jones, the band has already started performing at volleyball games and is looking forward to appearances at both men's and women's basketball games.

Jones reflected on the unique opportunities for exposure and scholarships the U of A Bands program affords. "When I was a student," he said, "I didn't realize how special and unique the support is that we receive from athletics, our alumni and scholarships. And whether it's travelling and getting to perform in awesome places like AT&T stadium, bowl games or NCAA basketball trips, there's a lot of life experiences you get with being in a program of this caliber as well. It's extremely valuable, and you get to do it with great people."

Both Jones and Summers have high expectations when the 350-member strong Razorback Marching Band kicks off the season this Saturday when the Hogs take on Cincinnati for the first football game of the year. The band will perform their Gameday show, including arrangements of Life is a Highway and Chris Stapleton's Arkansas. "This is one of the most talented bands I've worked with," Jones said. "It's going to be a lot of fun."

Chris Knighten, director of bands, summed up the two hires: "Dr. Summers and Mr. Jones are two outstanding educators with a proven history of excellence in teaching. That they also understand and embrace the traditions of our athletic bands is a wonderful bonus that students, alumni and fans of the program will enjoy."