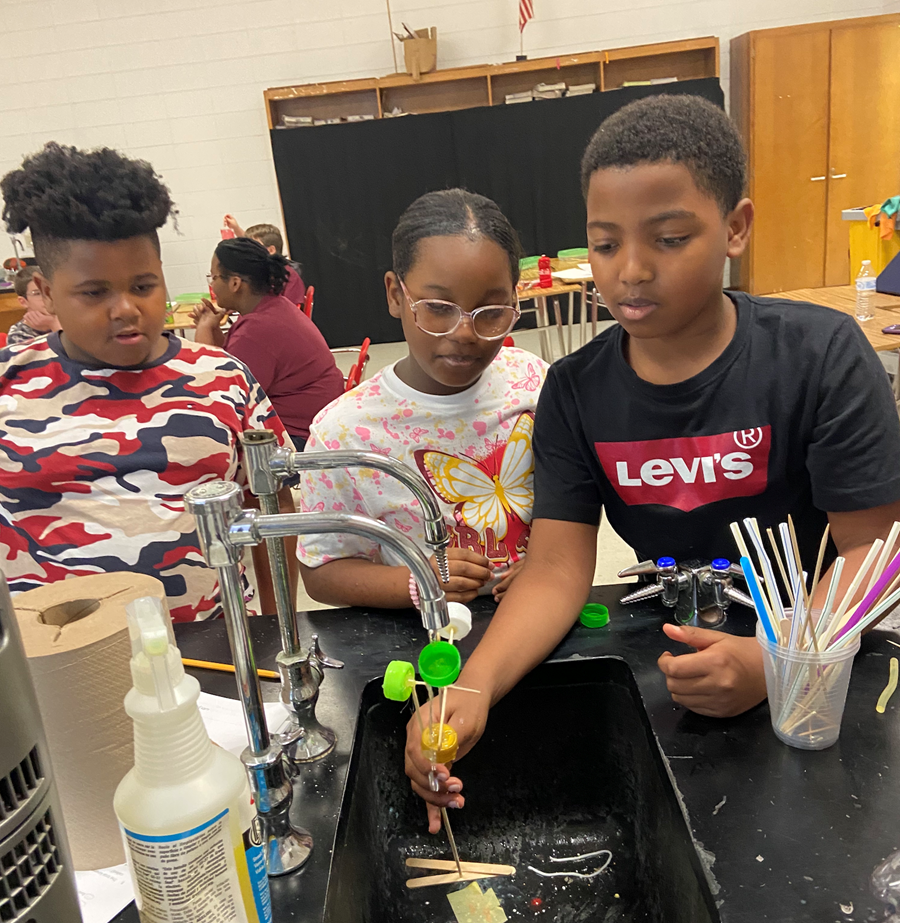 Students at Inside Engineering Summer Camp in Camden work as a team to create a water mill using recycled materials.

Camps the College of Engineering holds on campus and across the state each summer show students what goes on in the world of engineering and whether they might consider studying engineering in the future.

They also happen to be a lot of fun.

Camp director Teresa Simpson said her goal is to have each student learn about basic engineering concepts and dispel the idea that engineering is too challenging.

"I want them to leave with a possible interest and wanting to pursue a field in engineering," she said. "We also try to help with the cost so that students are able to attend and experience the camps."

In addition to Fayetteville, camps are held in Batesville, Blytheville, Camden, Harrison, Mena, Morrilton and Newport.

Most day camps cost $200-$300, but prices can vary based on donations, grants and a camper's eligibility for scholarships, said Simpson, the college's assistant director of recruitment, outreach and summer programs. Major sponsors include Phillips 66, the Maritime Transportation Research and Education Center and U of A's Women's Giving Circle.

A couple of camps focus on introducing engineering to girls, including GirlTREC, held in Fayetteville, and Soaring High in Engineering, held in Blytheville, Fayetteville and Morrilton.

During each week-long camp, the students learn what goes into building and conducting experiments that tie into the theme. They are led by student ambassadors who are engineering students at the U of A.

In "Mission to Mars," students learn fundamentals of space exploration and how to build a mini-rocket and "spacesuit." They also calculate how far their rockets go based on the force created by an air compressor, also called the "rocket launcher."

During the spacesuit exercise, students must make sure the suit isn't damaged while they go through an obstacle course. They also develop signals to mimic how astronauts communicate with the people back on Earth.

During "Science of Food," the students study concepts of civil engineering by building their own towers using spaghetti noodles and marshmallows. In one exercise, they learn about how electricity is conducted by creating a battery from a potato and wires. They also explore the chemical reaction behind the making of ice cream.

Students in the Fayetteville day camps shared some of their experiences and what they learned from their week at camp.

McKenzie, a 12-year-old from Fayetteville who will attend seventh grade at Woodland Junior High this fall, shared how the camp helped her expand her knowledge of math and science, two of her favorite subjects. She wants to study veterinary science.

"I really enjoyed the spacesuit project because we had to all work together as a team," she said. "I definitely will be coming back."

Parker, 14, of Farmington, will be in ninth grade at Farmington High School this fall. He knows that he wants to go into a field related to manufacturing.

"I really enjoyed learning and seeing how much work goes into everything since I know that I want to study biomedical engineering when I go to college," he said.

For more information on future camps, message engrcamp@uark.edu or visit the College of Engineering's camps page.