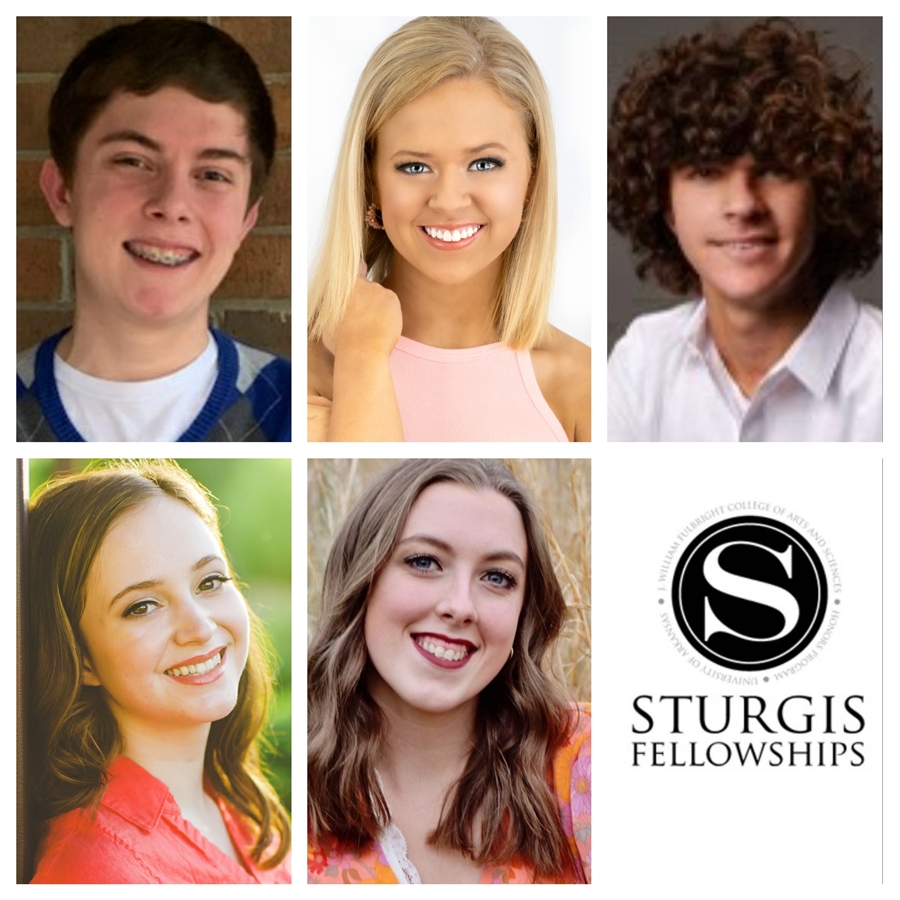 Five new freshmen, all Arkansans, have joined the distinguished list of Sturgis Fellows in the Fulbright College of Arts and Sciences this fall.

“One of my favorite moments each fall has been when we get to welcome our newest Sturgis Fellows to campus,” said Todd Shields, dean of Fulbright College. “These are some of the most astounding and impressive scholars, and it is an honor for us to be able to help further their education. We’re excited for them to join the Fulbright College family and to see what each will accomplish next.”

The Sturgis Fellowship is the U of A's oldest and one of its most esteemed fellowship programs.

It awards each fellow $80,000 over four years, covering tuition, room and board, and providing support for educational tools such as computer hardware and software, high-quality musical instruments, professional journals and participation at academic conferences.

Sturgis Fellows must pursue a major within Fulbright College, complete an intensive academic program and graduate with honors. They are also encouraged to study abroad. The fellowships are made possible by the continued support of the Roy and Christine Sturgis Charitable and Educational Trust.

“For the past three and a half decades, because of Roy and Christine Sturgis' generosity and the legacy they’ve created, dozens of incredible scholars have thrived in Fulbright College,” said Lindsey S. Aloia, director of the Fulbright College Honors Program. “And because of their vision, the Sturgis Fellowship remains one of the most prestigious, sustained fellowships at the University of Arkansas.”

“We’re happy to welcome the five newest 2022 scholars and to cheer them on and support them in their future successes,” she added.

Aaron Garcia is a graduate of Bryant High School, where he was valedictorian. As captain of the Bryant Quiz Bowl team, he led the team to its first state finals appearance in which he also earned the state MVP award. He additionally served as president of the local Beta Club chapter, which promotes community involvement and academic success. Outside of school, he volunteered in his church's children's ministry by leading small groups on Sunday mornings. Garcia plans on majoring in economics and becoming a financial adviser. His parents are Andy and Radeanna Garcia.

Addie Jones is a graduate of Harrison High School, where she finished first in her class. She served as vice president of her Family, Career and Community Leaders of America chapter; president of the History Club; vice president of the Arkansas Association of Student Councils; and participated in theatre, choir, quiz bowl, cross country, track, Key Club and the Miss Arkansas' Outstanding Teen Organization. She also founded the non-profit Bright Beginnings Books, which has given away over 7,000 new books to children. Jones plans to major in English and journalism, specializing in advertising and public relations. Her parents are Marcus and Angela Jones.

Coy Morris is a graduate of Valley View High School, where he was salutatorian, a National Merit Scholar and an AP Scholar with Distinction. He ran cross country and track, was All State for cross country his senior year and served as president of Jonesboro’s Mayor's Youth Council. He was on the executive board of Keep Jonesboro Beautiful, founded and served as president of the Valley View Political Action Club and was on the executive board of the Northeast Arkansas Chain Reaction Youth Council. Morris is a graduate of Arkansas Governor School and plans to study social science. His parents are Mike Morris and Cassey Cloninger.

Samantha Stark is a graduate with high honors of Haas Hall Academy, where she served as a founding leader of Science Club, co-director of the academy’s talent show and captain of its cheer team. Through Haas Hall’s Science Club, she developed and shared experiments with over 100 underserved elementary students in Oklahoma. She served as a volunteer for Apple Seeds, a community farm dedicated to educating children, and was selected a U.S. Presidential Scholar Semifinalist and National Merit Finalist. Stark plans to major in biology and chemistry to pursue a career in neuroscience. Her parents are Jennifer and Robert Stark.

Tara Young is a graduate of Van Buren High School, where she received a High Honors College Preparatory diploma. Additionally, she was an AP Scholar with Distinction and served as the secretary for her school's chapter of the National Honor Society and the Lambda chapter of Delta Beta Sigma. She was also a member of a pre-professional competitive dance company and created an organization called Fresh Start VB, that collected hygiene products for students in her school district. Young plans to study psychology. Her parents are Todd and Carman Young.

ABOUT THE STURGIS FELLOWSHIP

The Sturgis Fellowship in the Fulbright College of Arts and Sciences was established at the U of A in 1985 through the generous philanthropy of the Dallas-based Roy and Christine Sturgis Charitable and Educational Trust with an endowment of $2 million. The program’s success led to additional gifts in 1992 and 1998, bringing the total program endowment to $10 million.

With only 16-20 Sturgis Fellows on campus at any given time, each receives the kind of individual attention from the director, associate director and staff of the Fulbright College Honors Program that delivers a memorable and productive college experience.