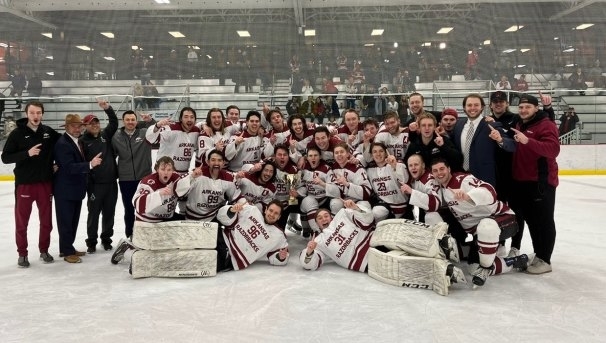 The Razorback Men's Ice Hockey Club started in 2007 and has been a winning dynasty in Division 3 ever since. The U of A club plays out of the American College Hockey Association (ACHA) and is consistently nationally ranked top 10 during the regular season. Recently, the club went the furthest it ever has nationally by reaching the championship in 2020-21 and coming in second, and falling in the national semifinal game in 2021-22.

The conference we play in used to be the SECHC until it moved leagues in 2020. Team members decided it was best to stay put in the league and leave the SECHC conference, which forced them to join the MACHA conference in the 2021-22 season. Some awards include being the six-time winners of the Southeastern Collegiate Hockey Conference and regular season and tournament champions of the MACHA in the 2021-22 season. The team has also hosted multiple 1st Team All-Americans each of the past three seasons.

Donate to the Ice Hockey Club.

Why Are We Raising Money?

Like many other sports at the U of A, the men's ice hockey team is consistently at the top of the national rankings, wins championships and is loved by Razorback fans. However, unlike those other teams, being a club team, the hockey team does not receive the funding that the other programs do. Because of this, the club relies on payments from the players as well as ticket and jersey sales from our faithful fans to fund the entirety of our seasons. To further help our team's financial goals, we have decided to launch this project in hopes that generous donors like yourself will help to keep our season funded, as well as taking some financial strain off of our players. We get to play the sport we love because of these donations, and everything is appreciated!

What Will We Spend the Money On?

How Can You Help?

There are many ways that you can help the club succeed and raise money for our season. The biggest one is by donating money to one of our various levels that are posted on the site or a custom amount of your choosing. The second way that you can help is by sharing this on your social media or emailing it out to friends, family, etc. as well as following us on Instagram, Twitter and Facebook. The last way that you can help is by trying to make Razorback Hockey known in Northwest Arkansas as well as coming out to support us at our home games! Thank you for reading, and we hope that you would be willing to help us out. From all of us in the organization, we thank you more than you will ever know for letting us live our dream!