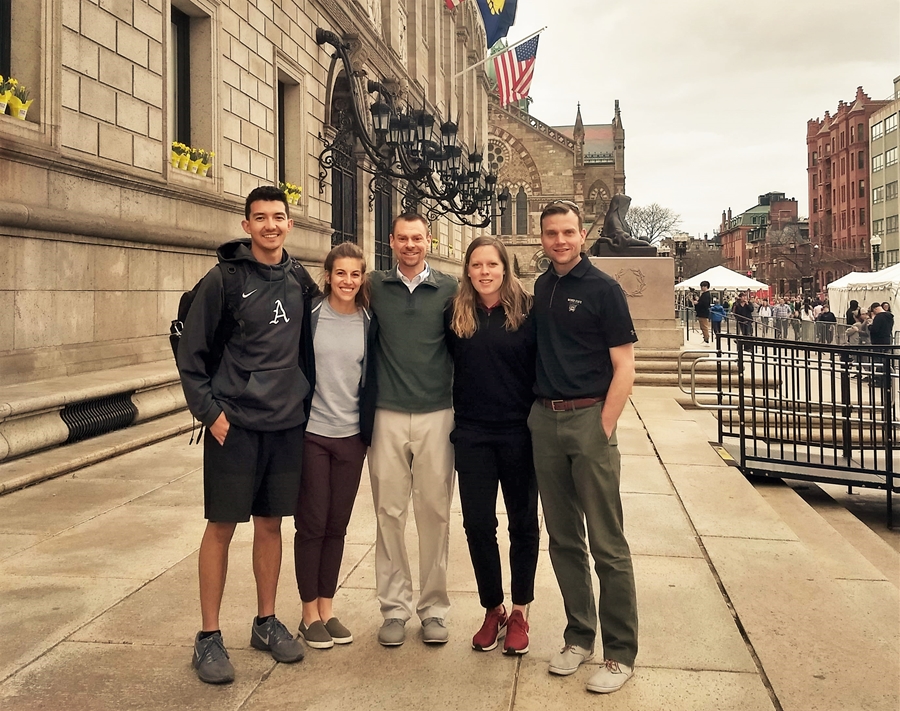 Associate professor Brendon McDermott (middle) with athletic training students at the 2019 Boston Marathon. McDermott has served as a heat illness expert and researcher on the race's medical team for many years.

With unprecedented global temperatures occurring at the same time as the kick-off of National Heatstroke Awareness Month, a University of Arkansas heat illness expert voiced his concern for athletes and workers in sweltering temperatures.

Brendon McDermott, an associate professor in the Department of Health, Human Performance and Recreation, has taught athletic training and exercise science for over 20 years and is a member of the medical and science advisory board at the Korey Stringer Institute. He has been on-site for the successful treatment of more than 120 exertional heat strokes and assists with treating runners at the Boston Marathon.

When exertional heat stroke is adequately recognized and treated, McDermott said, the death is 100% preventable.

McDermott recalled the story of an Arkansas high school athlete who suffered a fatal heat stroke during football practice in 2020. Despite his coaches' attempts to reduce his body temperature by packing him in ice on the way to the hospital, the patient suffered irreversible multiple organ failure.

The association and McDermott recommend tracking hydration to prevent heat stroke by monitoring urine color and frequency, and feelings of thirst. Dehydration can be avoided by keeping water or sports drinks with sufficient sodium easily accessible to replace nutrients lost through sweat.

The Arkansas Activities Association requires every school to assess wet bulb globe temperature — which precisely measures the current temperature, humidity, wind and solar radiation of the environment — for all activities, and to implement equipment and activity modifications at different temperature thresholds to prevent heat illness. However, McDermott said these policies are rarely enforced, and teams continue to practice despite temperatures often exceeding association guidelines.

"Coaches and athletic directors often think they can't cancel practice, so they go on," McDermott said. "Every school should have a wet bulb globe thermometer and athletic trainer on-site and have a detailed activity modification plan for extreme heat."

When someone begins to show symptoms of heat illness, McDermott said, on-site rectal temperature assessment is vital for recognizing and treating early stages of exertional heat stroke. The Arkansas Activities Association does not include this practice in its recommendations, so McDermott said it's up to each school district to develop a policy and order equipment.

However, he said the association does require every school to have a cold-water immersion tub on the site of activities. McDermott said this method of whole-body cooling prior to transportation saves lives.

"There is no efficient way to cool a person in an ambulance or at an emergency room," McDermott said. "If a patient with exertional heat stroke is transported, their outcome is likely unfavorable, and they might not survive."

He added, "If any of these preventive measures are not present, parents need to ask questions and mandate that their kids are afforded a standard of care they should expect when sending them to participate in organized athletics."

McDermott also expressed concern for workers employed in fields such as construction, agriculture, mining and manufacturing since they are more susceptible to heat illness.

"Workers are vulnerable in the workplace because the priority for businesses is productivity," McDermott said, "but neighboring states and businesses like Amazon are saving millions by employing athletic trainers to work with their employees."