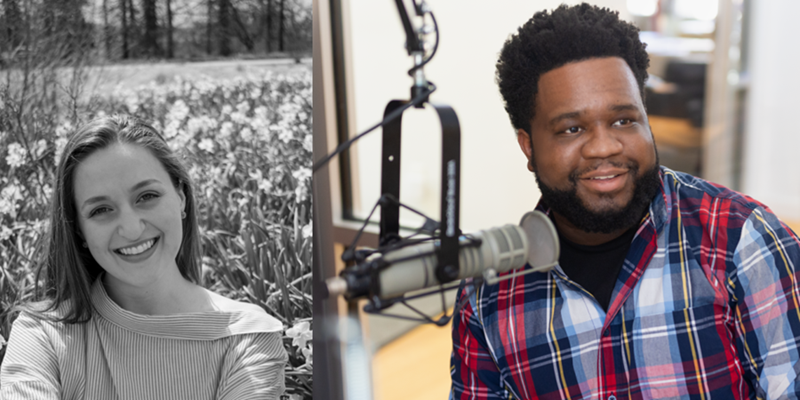 KUAF, local National Public Radio affiliate for Northwest and western Arkansas, has brought on two new hires to expand local reporting on growth and its impact on the area and to ensure and expand underwriting revenue for the station.

KUAF was selected as a 2022 Report for America partner newsroom in December 2021, and Anna Pope, Report for America Corps member, joined KUAF on June 1. Long-time underwriting director for KUAF, Rhonda Dillard, retired in May, and KUAF has brought on the second underwriting director in its history by hiring Ryan Versey, formerly of the College of Engineering and the Sam M. Walton College of Business.

Through the partnership with Report for America, KUAF created a new reporter position to cover the explosive growth of the area and that growth's impact on the daily life of its residents.

"We're excited to welcome Anna to the KUAF news team and excited to share her reporting on one of the most pressing and important issues impacting the entirety of our listening area," says Leigh Wood, KUAF's general manager, adding that Pope will soon become a familiar voice on Ozarks at Large, KUAF's daily, locally produced news program.

KUAF is among 70 new Report for America host newsroom partners for 2022, selected from more than 1,800 applicants. Recognizing the gap in coverage of the impacts of the growth of Northwest Arkansas, KUAF was selected for the proposal for a new reporter position to cover the economic, environmental, arts and cultural and affordable housing impact of this growth, particularly as it pertains to the major corporate employers in the region. Reporting on this growth and its impact will also include reporting on rural residents' access to healthcare, education, housing, infrastructure and more.

Pope, a native of Oklahoma and recent graduate of Oklahoma State University with a Bachelor of Science degree in multi-media journalism, brings experience in both rural and urban areas through going to school in Oklahoma City and spending time on her family's farm in Loyal, Oklahoma. She interned at KOSU, a member-supported public radio network that operates in central Oklahoma including Stillwater and Oklahoma City and in northeast Oklahoma including Tulsa, Bartlesville and the Grand Lake area.

"Working at a station that is passionate about serving its surrounding communities is the beauty of being in public radio," Pope says. "I grew up listening to public radio and am beyond proud to be working at KUAF."

Versey joins the KUAF team with many years of multi-media communications experience, as well as radio programming and radio sales experience. As one of the first radio personalities of KDIV 98.7 FM, the Voice of Diversity in Fayetteville, Versey brings a variety of skills in creative design, digital media, photography and more to the station. Versey was formerly a multi-media communications specialist with the College of Engineering and the program and constituent relations outreach coordinator with the Dr. Barbara A. Lofton Office of Diversity & Inclusion in the Walton College of Business. He is also the photographer and social media manager for the U of A Bands and the founder of creative media agency VERSatile Optics Media.

"We're so excited to bring Ryan onto the team. His experience and expertise in digital media will help KUAF expand our digital media sales, as well as on-air sales revenue," Wood says. "The pandemic accelerated the rate at which people are listening to the 'radio' on their computer, smart phone and smart speaker, and those are all areas of potential revenue growth."

A native of Texarkana, Texas, Versey is a graduate of Prairie View A&M University. Versey graduated with a Bachelor of Arts in mass media communications with a concentration in public relations and advertising from the Marvin D. and June Samuel Brailsford College of Arts and Sciences.

"I'm excited to be a part of such a community-oriented team. There are tons of new possibilities with the growth of this region, and I look forward to contributing to it," Versey says.

KUAF has been the NPR affiliate for Northwest and western Arkansas, eastern Oklahoma and southwest Missouri since 1985 and is a listener-supported service of the U of A. KUAF provides local reporting with a news team of five reporters and produces a hour-long daily news program, Ozarks at Large, as well as national programs from NPR. Listener contributions can be made to the station at supportkuaf.com.