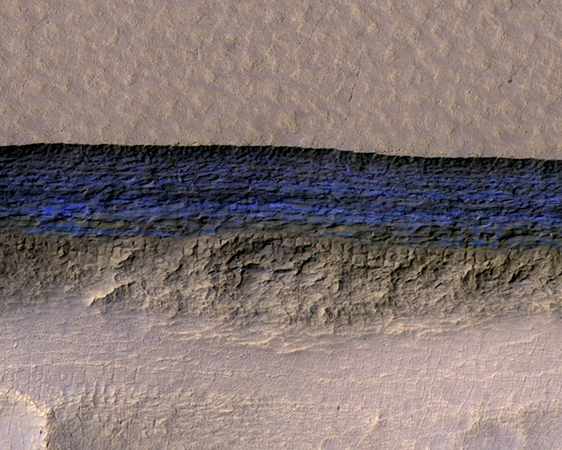 A cross-section of underground ice is exposed at the steep slope that appears bright blue in this enhanced-color view from the HiRISE camera on NASA's Mars Reconnaissance Orbiter.

Associate professor Vincent Chevrier at the U of A Center for Space and Planetary Sciences was awarded $100,000 to study the stability and distribution of clathrate hydrates and clathrasils on the surface of Mars in hopes of discovering a source of methane.

Identifying probable sources of methane would be a critical step in advancing the exploration of Mars, as methane could be utilized to power either robotic or manned exploration. The $100,000 grant was made by the Arkansas Space Grant Consortium at the University of Arkansas, Little Rock, in hopes of accomplishing this.

Past studies have already confirmed the presence of methane on Mars. Now Chevrier is hoping to identify its most likely sources. A strong possibility is that it is bound in clathrate hydrates, an ice-like substance found both above and below the shallow subsurface of the planet. Clathrate hydrates contain water molecules with cage-like spaces that can entrap gases – including methane. Clathrasils present another possible reservoir for methane. These are compounds related to silica but have crystalline structures similar to clathrates. Large deposits of nearly pure silica have also been found on Mars by the Compact Reconnaissance Imaging Spectrometer for Mars.

While clathrasils are rare on Earth, and there is no direct evidence they are present on Mars, Chevrier believes the presence of clathrates, as well the deposits of pure silica, are promising indicators that clathrasils could also be present in sufficient quantities to warrant investigation.

In short, Chevrier has two promising leads in his bid to find potential sources of methane on Mars. The major thrust of the grant will be to identify the most promising sources, locations and abundances of these compounds, and in so doing map out points for further exploration. Since methane clathrates are more stable at higher pressures and lower temperatures, Chevrier will focus his attention on the polar caps, as well as likely sub-surface areas where high pressure prevails. The bulk of the grant will be used to support a post-doctoral student, Abhilash Ramachandran.

“This grant will allow us to start providing clues to the availability and accessibility of resources for future human exploration on Mars,” Chevrier said. “The presence of energy sources would be extremely valuable for future astronauts establishing a first colony on another planetary surface.”