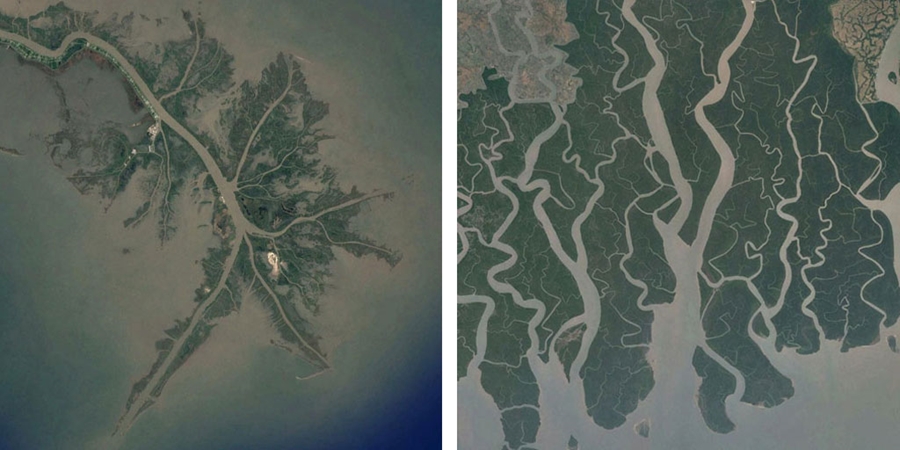 How do coastal channels form and what are their stable configurations? These are the questions a team of researchers, including a University of Arkansas assistant professor of geosciences, John Shaw, set out to answer in a recent paper.

Answering these questions will be necessary to anticipating changes to coasts caused by climate change and human activity, including rising sea levels, river damming and other forms of engineering.

“We’ve destablished channel networks in ways we haven’t anticipated,” Shaw explained. “Because so many people live around these networks, destabilizing them can be dangerous and difficult to adapt to.”

As an example, Shaw compared the Mississippi River Delta, where all river channels lead eventually to the ocean, to the Ganges-Brahmaputra Delta in Bangladesh, where the channel network is so full of loops — a kind of island formed by branching channels — that a boat driver could drive forever around the maze of channels.

Both regions are facing a range of economic challenges as some channels leading to ports are clogged with sediment, while others grow uncontrollably. The paper argues that “a clear understanding of channel network evolution is essential for a sustainable coastal future.”

Loops can be hundreds of square miles in size and prime locations for aquaculture, which is why the question of their stability in the larger network is important. But while they are a common feature of channel networks, little is known about how they form and why they persist over time, which is to say, why the less efficient channel doesn’t simply silt over.

To examine the stability of loops, the researchers developed a model inspired by vascular biophysics. Likening capillaries and veins to rivers and streams, Shaw noted that both are adaptive systems. He explains: “If you put more flow through them, they grow. If you put less, they tend to shrink. That’s what happening at a large scale with rivers.”

Ultimately, by using field data and satellite imagery from 21 different channel networks in their modeling, they tied the stability of loops to systems where there was strong interplay between rivers and tides. In relatively loop-free networks, like the Mississippi Delta, flows do not fluctuate significantly.

The trick to keeping loops in the network, Shaw says, is for the flow through the system to be constantly rearranging itself due to different inputs from river floods and tides. In this case, all of the channels in the loop have significant flow through them sometimes, and this allows them to stay open.

Shaw and his colleagues now have a clearer understanding of what conditions are likely to generate loops, even if they can’t predict their exact size and location. Nevertheless, now that they understand the basic framework for their creation, they can begin assessing what precise circumstances will lead to their destruction — and how they may impact human settlements in turn.

The paper, titled Interplay of River and Tidal Forcings Promotes Loops in Coast Channel Networks, was published in the American Geophysical Union’s journal, Geophysical Research Letter. Shaw, the corresponding author, cowrote the paper with Adam Konkol, Jon Schwenk and Eleni Katifori. Their work was funded by the Department of Energy, the National Science Foundation, the Simons Foundation and The Los Alamos National Laboratory.

About the Department of Geosciences: The Department of Geosciences traces its origin to 1873 when the first mineralogy course was offered at the University of Arkansas.  Our faculty and students examine the processes that form and shape Earth's surface, the natural resources we use, how water and ecosystems are interconnected, variations in climate and paleoclimate, the use and development of geospatial methods, and the human geography of ethnicity, gender, class, social inequity, and religion. The department earned $2 million in research awards in FY 2020, and our students benefit from over $3 million in endowed scholarship funds contributed by generous alumni and friends of the department. To learn more about the Department of Geosciences please visit our website.