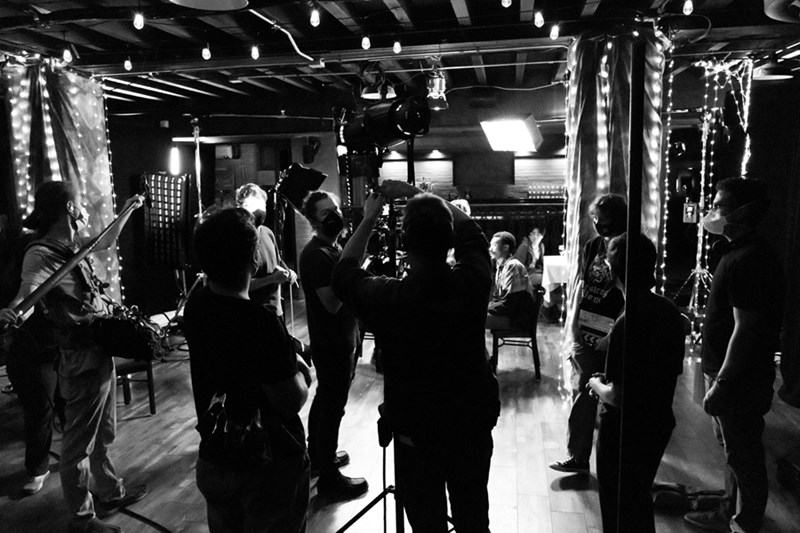 Behind the scenes of the NWA Film Cycle production of the short film 'Angle of Attack.'

A multidisciplinary team of faculty and students at the U of A recently wrapped production on their first short film as part of the NWA Film Cycle, an innovative new program funded by the Chancellor’s Fund for the Humanities and Performing Arts.

The film, titled Angle of Attack, is a collaboration between the School of Art and the departments of Theatre and Communication, drawing on the talents of current and former faculty to provide invaluable hands-on experience for students in all areas of filmmaking.

Angle of Attack, now in post-production, is the first in a series of NWA Film Cycle projects designed to offer students the opportunity to work with veteran film professionals in key crew positions and lay the foundation for both credit and non-credit programs in film writing and production at the university.

“Film is a truly communal art form, and the value of students getting to work alongside industry professionals is extraordinary,” said Adam Hogan, the film’s cinematographer, as well as an assistant professor and head of the Experimental Media Program in the School of Art.

NWA Film Cycle traces its roots back to a short film, Animal, produced in 2019 by then-professor of practice Russell Sharman in the Department of Communication, in collaboration with Kris Katrosh, media production manager at U of A’s Global Campus, and Rockhill Studios, a Northwest Arkansas production company.

Animal employed a dozen students under the supervision of professional filmmakers in key positions and went on to screen at festivals across the United States and around the world.

“The whole experience was an unqualified success,” Sharman said. “Seeing those students discover the thrill of filmmaking, learning every aspect of the craft and catching a vision for what a career in the industry could look like, was incredibly gratifying.”

The success of Animal led to a multidisciplinary grant written by Sharman and John Walch, assistant professor and head of the M.F.A. program in playwriting in the U of A’s Department of Theater. The team was awarded one of the first ever U of A Chancellor’s Fund for the Humanities and Performing Arts in early 2020 to create the NWA Film Cycle program, but the project was put on hold with the onset of the COVID pandemic.

Two years later, Angle of Attack marked the first of the series of films slated to be produced by the NWA Film Cycle program. The film brought Sharman, now a freelance filmmaker in Baltimore, back to direct alongside Walch as screenwriter, and Hogan as cinematographer.

“I don’t think there’s anything else quite like this program anywhere in the country,” Sharman said.

This team of veteran professionals oversaw more than a dozen students in all departments, from camera to grip and electric to set design to makeup and wardrobe, including a cast of professional actors from around the country working side by side with students in the M.F.A. acting program at the U of A to create Angle of Attack.

Angle of Attack is the story of a group of friends attending a poetry night and discussing the meaning of artistic expression, from poetry to tattoos. The film was shot at several locations on the Fayetteville Square. Angle of Attack will head into postproduction this summer and be released in the festival circuit this fall.

“This experience proved to be much more than a learning opportunity,” said Keaton Grimmett, one of the students who worked on Angle of Attack. “I was given the chance to see the value of each crew member and have gained a greater respect and pride for who they are and what they do. I couldn’t be more excited to jump into this field. This opportunity has only made me more eager to get to work.”

Robinson, the producer from New Harvest Creative, agreed, and added, “There’s no better way to get someone into the ecosystem than to give them the opportunity to work with a seasoned professional. This model is the optimal opportunity for aspiring filmmakers.”

Hogan also noted that “students got to witness how quickly ideas moved from a conversation about a character’s current state of mind between Russell, the director, and myself, to seeing how effectively Kris, the gaffer, and I could sculpt light and shadow to realize that vision, bringing it to life on screen.”

Theatre’s Walch, who wrote the Angle of Attack screenplay, said, “The arts are a generative force, and it was a blast to have students, professors and community professionals working together on a creative project.”

While Walch said Angle of Attack is a microproject, the goal is to plant the seeds for future development of larger projects through the NWA Film Cycle program.

“You never know what will happen,” Walch said, “but in my experience cultivating the soil under your feet provides both the immediate rewards of collaborating creatively with students and enhances the potential for future growth.”

Sharman agreed and added that he also hopes part of that future growth will be tied to the burgeoning film industry in Northwest Arkansas and across the state.

“The goal of the NWA Film Cycle program is to connect the demand for well-trained crew in the region with the supply of eager and committed students of the cinematic arts,” Sharman said. “We want to seed a true filmmaking community that could eventually support a local film industry to rival the prestige and productivity of cities like Austin, Texas; Wilmington, North Carolina; and even Atlanta, Georgia.”

Todd Shields, dean of Fulbright College, commended Sharman, Walch, Hogan and their team for these efforts and said the NWA Film Cycle program is an excellent example of what can happen when the arts, humanities and technology combine.

“Just think of what a jump start the NWA Film Cycle program will be for our community as well as for our students who aspire to be professional filmmakers,” Shields said. “When multidisciplinary projects like this are funded, there’s no limit to what can be accomplished or created. I can’t wait to see what the NWA Film Cycle team will make next.”