Two U of A Students Named 2022 Goldwater Scholars 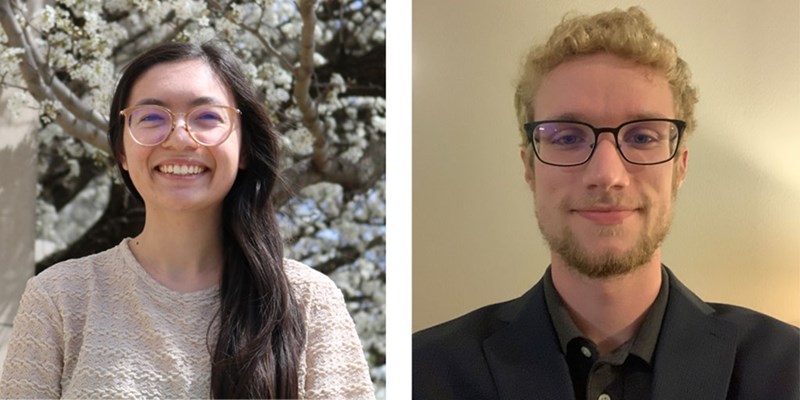 Two U of A honors students have been named 2022 Goldwater Scholars, an award for top students in mathematics, science and engineering.

Juniors Mary Jia and Joseph Roll were named among the newest scholars, and each will receive a scholarship of up to $7,500 from the Barry Goldwater Scholarship Foundation.

Jia is a Stuttgart native and an honors biomedical engineering major. Roll is from Joplin, Missouri, and an honors physics and mathematics major.

“The Goldwater Scholarship is the most prestigious undergraduate STEM scholarship in the country,” said interim Chancellor Charles Robinson. “It recognizes students who begin research early in their careers and who promise to continue research as a career path. They could not have chosen better than Mary Jia and Joseph Roll. Both have been engaged in research since their freshman years (and even before), and both are stellar students working with supportive faculty and are on an upward career trajectory that will launch them into a world of work marked by new discoveries that will benefit us all.”

More than 5,000 students competed nationwide for the Goldwater Scholarship this year. It is the nation’s most prestigious award for undergraduate students who plan doctoral studies and research careers in the fields of math, science and engineering.

The Barry M. Goldwater Scholarship was established by Congress in 1986 to honor the United States senator. The purpose of the program is to provide a continuing source of highly qualified scientists, mathematicians and engineers by awarding scholarships to college students who intend to pursue careers in these fields. Universities and colleges may nominate up to four students each year.

2022 U OF A GOLDWATER SCHOLARS

Jia's primary research focuses on developing a prime editing solution for Duchenne Muscular Dystrophy, and she is supported by a State of Arkansas Student Undergraduate Research Fellowship.

She is listed as first author in an article submitted to the Journal of Magnesium and Alloys for her research into the assessment of a novel boron nitride magnesium nanocomposite for orthopedic implant, and will present on her research integrating SOLIDWORKS 3D design and simulation into a biomechanics course at the 2022 American Society for Engineering Education national conference.

Jia has been active on campus in the Biomedical Engineering Advisory Board, the First Year Engineering Program Research Mentor Program, Biomechanics Teaching Assistant, Biomedical Engineering Camp Leader and an Honors College Ambassador. She is a Bodenhamer Fellow and an Arkansas Distinguished Governor’s Scholar. Jia has also received the Charles D. Brock Scholarship and the George & Boyce Billingsley Endowment Scholarship. She will pursue a Ph.D. in biomedical engineering.

“Mary is an amazing undergraduate researcher and operates in the lab like a graduate student," said her research mentor Christopher Nelson, assistant professor of biomedical engineering. “For example, she will soon be presenting at the annual meeting of the American Society for Gene and Cell Therapy. Mary is tenacious and innovative, making her an ideal recipient of the Goldwater scholarship. She will be an excellent representative of this program."

Roll’s primary research examines second harmonic generation of SnS monolayers, work that is supported by a State of Arkansas Student Undergraduate Research Fellowship. His contribution to an experimental research team to analyze a thin slab of SmSbTe has been published in Advanced Quantum Technologies.

Outside of the lab, Roll is a Student Ambassador, serving as a tour guide to prospective students and their families. He has received the Davis P. Richardson Scholarship and the New Arkansan Non-Resident Tuition Award. Roll will pursue a Ph.D. in theoretical physics.

“Joseph Roll’s dedication to his work and the high standards he sets for himself make him very worthy of this recognition,” said Salvador Barraza Lopez, associate professor of physics. “In addition to being a Goldwater Scholar, he is the lead author of theoretical work analyzing the elastic behavior of novel two-dimensional materials that is under review at Physical Review B. Joseph presented that last work as an oral contributed talk at the 2022 APS March Meeting in Chicago. Roll has been enrolled in multiple graduate-level courses in physics and mathematics. From the beginning, serving as a research mentor to Joe and discussing physics with him was a joy. His level of intellectual engagement and understanding is rare, and it has been a pleasure to work with him.”

These Goldwater Scholars bring the U of A total to 59, with U of A students receiving awards for 24 of the last 26 years. Previous Goldwater Scholars have gone on to become Rhodes, Marshall, Gates Cambridge, Fulbright and Udall Scholars as well as National Science Graduate Research Fellows.