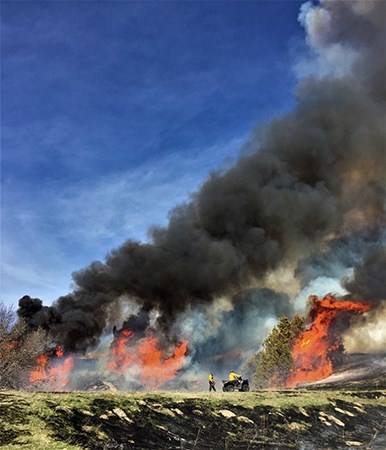 Of all bird guilds in North America, grassland birds are experiencing the sharpest declines due to habitat loss. Several factors are contributing to this loss, including the spread of agriculture, energy development and urbanization. But another driver in the loss of grassland birds is the encroachment of woody plants into their habitat, which fire suppression has accelerated over the years.

According to an article published in Discover, “Remote sensing technology shows that from just 1999 to 2018, tree cover increased across 44 million acres of the Great Plains. That’s roughly the size of Kansas.” This has consequences beyond habitat loss for wildlife: more trees means more water is drawn from streams and aquifers, competing with human needs, while ranchers are also seeing forage for their livestock reduced.

But a solution has emerged.

A recent study published in Ecological Solutions and Evidence suggests that large, intense and controlled burns can halt and reverse the encroachment of woody plants into grasslands and help restore declining grassland bird populations. Lead author of the study is Caleb Roberts, a U.S. Geological Survey research ecologist at the Arkansas Cooperative Fish & Wildlife Research Unit, based in the U of A’s Biological Sciences Department.

The study, titled “Large-scale fire management restores grassland bird richness for a private lands ecoregion,” examines a restoration initiative by private ranchers, natural resource agencies and university researchers in the Loess Canyons ecoregion of the Great Plains. A key feature of this initiative, dubbed the Loess Canyons Experimental Fire Landscape, was the implementation of large, intense and consistent prescribed fires.

Over a 14-year period, the researchers examined a roughly 137,000-hectare ecoregion, or about 530 square miles, that was subjected to these fire treatments and found that the richness of grassland birds increased across 65 percent of it, or roughly 222,000 acres. Between 2010 and 2016, the mean annual burn area was roughly 7,700 acres, targeting the boundaries between invasive woodlands and grasslands. Grassland bird richness increased 85 percent in fire-treated areas.

The paper concludes: “The evidence suggests targeted grassland restoration focusing on preventing woody plant encroachment in intact grassland cores and restoring grasslands at boundaries between grasslands and invasive woodlands will be most successful in conserving and increasing grassland bird diversity.”

So does this mean we will see a greater emphasis on prescribed burns as a means of ecological restoration moving forward?

Perhaps. An article on mega fires in the Nov. 8, 2022, issue of The New Yorker noted, “The U.S. Forest Service and the Department of the Interior employ some fifteen thousand wildland firefighters, who are directed to prioritize fire suppression; as a result, ninety-eight per cent of all wildfires in America are extinguished before they become large.”

Roberts sees many obstacles to changing this mindset. “There is still a powerful stigma and fear around fire usage in many areas.” He said that this includes a number of legal and policy barriers for private or public land managers to overcome. There’s also a widespread belief that trees are universally good, which translates into thinking that killing trees and restoring grasslands via fires is bad.

A prescribed fire also presents technical challenges. Roberts said that “For prescribed fires to be an effective restoration tool, they need to be hot enough to kill trees, big enough to make a dent in the tree invasion and strategically placed to create a sufficiently large, defensible 'core' of grassland habitat that is safe from invasion. All of these are things are difficult to coordinate at large scales — making their uptake difficult, too.”

Roberts added that “safely setting and leading prescribed burns is a skill that requires lots of practice and experience. There is often a knowledge bottleneck, where only a handful of folks have the skills, and their time is typically spread thin.”

Nevertheless, the findings are promising. Roberts’ co-author, Divac Twidwell, summed up the next steps in an interview with Discover: “The more we can figure out how to shape this natural event, the more we will be able to manage grasslands in a way that prevents out-of-control wildfires and benefits local ranchers, wildlife, water and the ecosystem as a whole.”