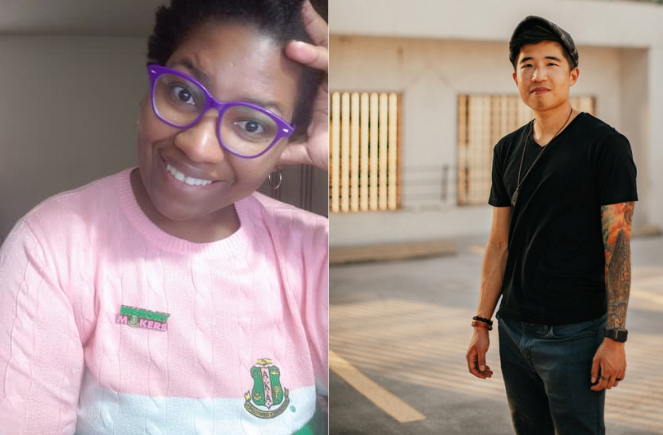 Professors Constance Bailey and Vox Jo Hsu, creators and hosts of the new podcast _Unpack This!_

Bailey and Hsu's collaboration wasn't too surprising considering they've been friends for a while. They met when they were both assistant professors in the Department of English at the University of Arkansas. (Hsu began their current position at UT Austin in the fall of 2020.)

At the U of A, Bailey and Hsu started off as writing-accountability buddies, a common arrangement in which junior faculty motivate each other to progress on the tenure track. Their partnership produced scholarly work, as expected, but their writing time often began with a period of unloading their experiences from the week, or discussing the latest TV show or podcast they were both following.

They would often message each other about these moments or artifacts from pop culture, and they would joke, said Hsu, about how "we should talk about that on our podcast."

Conversations on that particular topic stayed humorous for another few years—neither had created or hosted a podcast before, though both had previously been interviewed or served as guests on other people's podcasts.

Eventually, though, the joking stopped, the planning started, and in September of 2021 they aired their first Unpack This! podcast episode: "So You Want to Be a Professor . . . ."

The podcast's current one-line description reads, "Part demystification of academic genres, part spilling of tea, and part wayward conversation, this is a show for students, scholars, and non-academics who refuse to take themselves too seriously."

Their goal as hosts is to explore experiences and perspectives that are structurally marginalized in academic spaces.

"We have some episodes specifically directed toward graduate students who may encounter these experiences as outsiders—as we did, and oftentimes still do," explained Hsu. "The majority of episodes, however, are created for folks who've experienced academic space as alienating, but who also have sought, participated in, and/or built spaces of survival in universities and other sites of higher education.

"More broadly, though, we also hope that these accounts — not only our stories, but those of the many guests we have planned for future episodes—will affect, however slightly, others' understandings of who academics are, what academic professionalization should do, and what values and relationships shape our work in these spaces."

For the first three episodes, Bailey and Hsu provide a kind of entry point into academic professionalization. They discuss the conversations they have with folks who meet with them to explore the possibility of going to graduate school (Episode 1), explain the role of writing and publishing in their jobs (Episode 2), and then share their thoughts about and experiences with academic conferencing (Episode 3).

After that, they move to more general topics. In Episode 4, they unpack Netflix's The Chair, in Episode 5, they discuss feelings of "home" and experiences of homecoming in their college/university experiences, and in Episode 6, they delve into their pop culture "problematic faves."

Future episodes will focus on academia's made-up genres, and on cultures around "wellness" and "self-care."

So far, they said, the major obstacle to creating and hosting episodes for Unpack This! is time. Even when they worked at the same school and lived in the same state, finding time to align their schedules was a struggle. "All things considered, though," said Hsu, "I'm pretty proud of how we've managed to make time for this and one another."

Another challenge has been processing and uploading the audio, but the Liberal Arts IT Studio at the University of Texas at Austin (where Hsu is) has been tremendously helpful for that.

When asked about what they would like for Unpack This! to achieve, Hsu replied, "So, my selfish goal is that I get to stay in touch with Constance—and that's been going wonderfully. In terms of a broader impact (if I get to dream), . . . my hope [is] that we can shift conversations in academia about our professional practices and about how we (continually) revise our policies and structures to expand the forms of knowledge and knowledge-making that we share and value."

In addition, while Bailey and Hsu still enjoy joking around with each other quite a bit, especially when they unpack their pop culture interests on the podcast, a serious objective underlying their humor is to "demonstrate how broadly applicable our academic training can be — how critical understandings of race, gender, sexuality, disability, and class can reveal the broader impact of mainstream representation and how it affects the way we interact with the people around us."

Though their areas of scholarly specialization remain quite distinct, Bailey and Hsu have discovered, through working together on Unpack This!, that their research, teaching, "and perhaps general life interests" come together in one interesting way: their shared concern over how media representations directly influence attitudes and policies that ultimately impact people's lives.

"So, I guess if I'm dreaming," said Hsu, "I'm hoping we get to nudge some attitudes toward structural change."