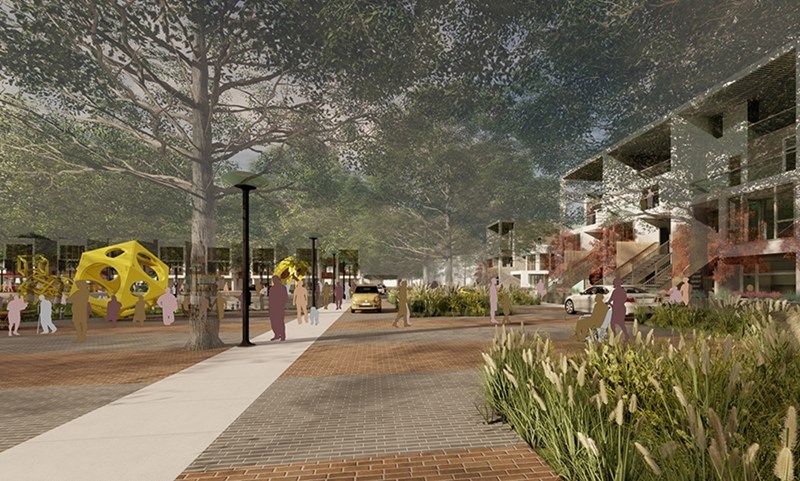 Rendering by U of A Community Design Center

Now in its 27th year, the American Architecture Awards program is organized by The Chicago Athenaeum: Museum of Architecture and Design and The European Centre for Architecture Art Design and Urban Studies, which jointly present this prestigious annual program for design excellence and for the best and next contributions to innovative contemporary American architecture. More than 120 buildings and urban plans were recognized in one of 23 categories, celebrating the best new architecture designed and constructed by American architects and by international architects with offices in the United States.

The housing types consist of affordable walk-up residential multifamily typologies — rowhouses, bungalows, triplexes, courtyard housing and townhouses — that have not been built since the dominance of 1950s suburban policy. These housing typologies, also called missing middle housing, are compatible with single-family housing. They are affordable types (between 900 and 2,100 square feet) that are key to revitalizing small and mid-sized downtowns without the population dislocations that accompany gentrification.

The Markham Square proposal connects street and square as a continuous civic space, with a design that combines pedestrian-friendly "slow streets" with the square's plazas that showcase public art. The goal is to create an iconic downtown gathering place while introducing downtown housing options for which there is demand but no supply. Markham Square could become a choice downtown neighborhood for an underserved market desiring downtown residential living in Central Arkansas.

"Like pre-World War II neighborhoods characterized by high levels of informality, neighborhood services and social capital, housing that serves future populations well will have to be conceived at the level of the neighborhood rather than the individual project," Luoni said. "We are grateful that the American Architecture Awards recognized the same beauty we see in getting social, ecological and aesthetic systems to work harmoniously toward shaping ordinary places."

The "Markham Square Housing District" project was funded by the National Endowment for the Arts under its Art Works program and the city of Conway. It was a collaboration among the Community Design Center staff, the Department of Architecture students, Conway's planning and transportation departments, citywide stakeholders and the Arkansas Natural Resources Commission.

In addition, Adohi Hall, completed in 2019 on the U of A campus, received an American Architecture Award in the Schools and Universities category. Adohi Hall is a 202,027-square-foot sustainable residence hall and living-learning community, as well as the nation's first large-scale mass timber project of its kind. The innovative project was conceived and designed by a design collective led by Leers Weinzapfel Associates of Boston, Modus Studio of Fayetteville, Mackey Mitchell Architects of St. Louis and OLIN of Philadelphia. Nabholz Corporation of Rogers was the general contractor.

More information about the 2021 American Architecture Awards can be found on The Chicago Athenaeum website.