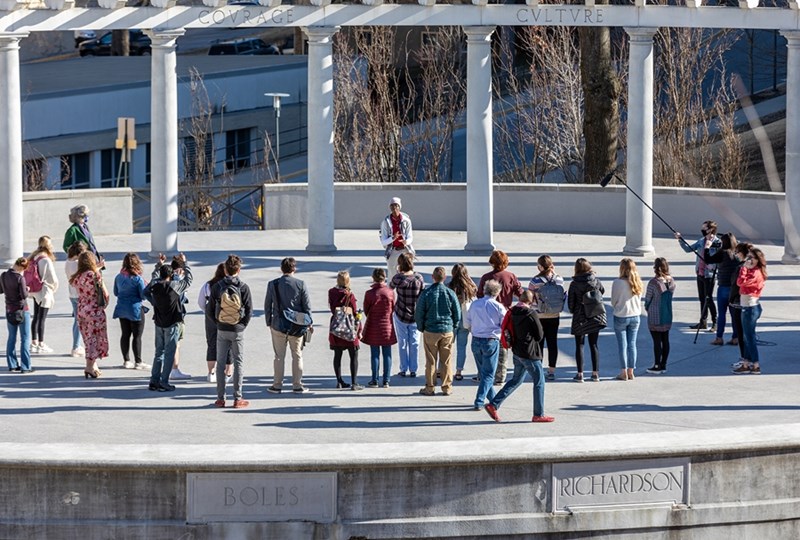 Honors Path Scholar Ahmad Pace Jr. discusses the "Dixie" Protests at the Greek Theater during a tour of Black student experiences on the U of A campus last spring.

The videos were produced by the Honors College in collaboration with University Relations; these awards mark the third year in a row that this partnership has won recognition from the Davey Awards.

The Davey Awards, inspired by the Biblical tale of David and Goliath, seek to honor creative "Davids" who derive strength from big ideas rather than big budgets. The Davey is judged and overseen by the Academy of Interactive and Visual Arts.

"Both videos capture important honors student research," said Honors College Dean Lynda Coon. "Band Aid documents an ongoing effort to protect student musicians who add much to our athletic endeavors. And the BAD Times tour enriches our understanding of the Razorback family and its surrounding community, which is especially important as we mark the university's Sesquicentennial and look forward to the next 150 years."

"Our partnership with the Honors College is one of the most fulfilling professional relationships we have on campus," said John Steele Cooper, managing producer of video productions for University Relations. "The stories we get to tell about our campus community reinforce the mission of the University of Arkansas in ways other media can't do. We're pleased to know our efforts are recognized by the Davey Awards."

Band Aid was coproduced by Kendall Curlee and Hiba Tahir and directed and filmed by John Steele Cooper; Brian Petty edited the video. The Legacy of BAD Times was coproduced by Curlee and Katie Wilson Powell, and directed, filmed and edited by Cooper. For both videos, Tony Steck, creative director at DOXA/VANTAGE, designed opening credits and graphics. University Relations staff Ashley Acord provided animation and assisted with production and Eric Olson edited the sound.