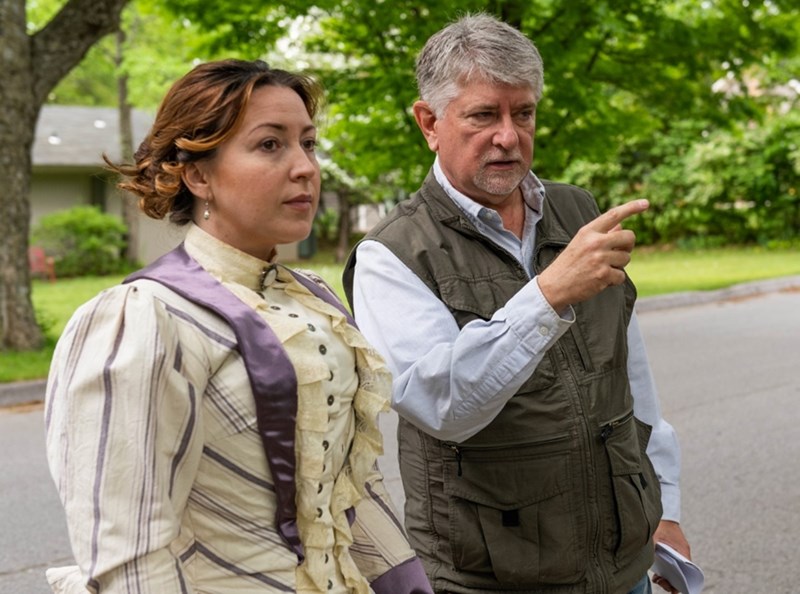 Larry Foley, professor and chair of the School of Journalism and Strategic Media, has received an Emmy Award for directing from the Mid-America Chapter of the National Academy of Television Arts and Sciences.

Foley was awarded the Emmy for directing the 80-minute documentary feature Indians, Outlaws, Marshals and the Hangin' Judge, a film that blends both documentary and narrative to a story set in the late 19th century.

This is Foley's eighth Emmy, but his first Director Award. He previously received the Silver Circle award from the Mid-America chapter for his 40-plus year career as a teacher, filmmaker and journalist.

"During pre-production research, I found an in-depth story journalist Ada Patterson had written for the St. Louis Republic newspaper in September 1896 about the federal court in Fort Smith, Arkansas," said Foley, who is also the film's writer and producer. "I located the full piece on microfilm at the Missouri Museum of History and had it shipped to Mullins Library at the University of Arkansas."

"The story was colorfully written — based on a sickbed interview Patterson conducted with Judge Isaac Parker. She also interviewed the hangman, a jailer and a guard," Foley said. "It was then I decided to push the invisible boundaries between documentary and narrative filmmaking. Hiring Bill Rogers to portray Parker and Jennica Schwartzman as Patterson — both talented actors — allowed us to bring the story to life, while staying historically accurate to the words penned by the reporter."

"This is a true tale of Indian removal, crime, capital punishment and a charismatic federal judge who sentenced scores of felons to 'hang by the neck until you are dead,'" Foley said.

Outlaw gangs hid from the law in lands given to native people, until Indian Territory was taken away and turned back to settlers. Told in first person using the actual words written by St. Louis Republic newspaper reporter Ada Patterson in September 1896, this real-life story is set in and around Fort Smith, Arkansas, in the same time and place as the fictional Western novel and film, True Grit. Patterson narrates, much as Mattie Ross tells the story in the Charles Portis classic.

"With careful and honest detail to the words and visual history of the era, we re-create Patterson's interview with Judge Isaac Parker, the infamous 'hanging judge,' conducted on Sept. 1, 1896, the date Parker's court was stripped by Congress of its jurisdiction over Indian Territory," Foley said.

In Foley's film, Parker, who was dying of kidney disease, tells Patterson a gripping tale of his court, and his view of American Indians, saying, "Twenty-one year's experience has taught me they are a religiously inclined, law-abiding, authority-respecting people," and speaking alternatively of the "brutes" who stood trial before his bench.

The Emmys were presented virtually Oct. 23, from St. Louis.

The film is available on DVD from the University of Arkansas Press.