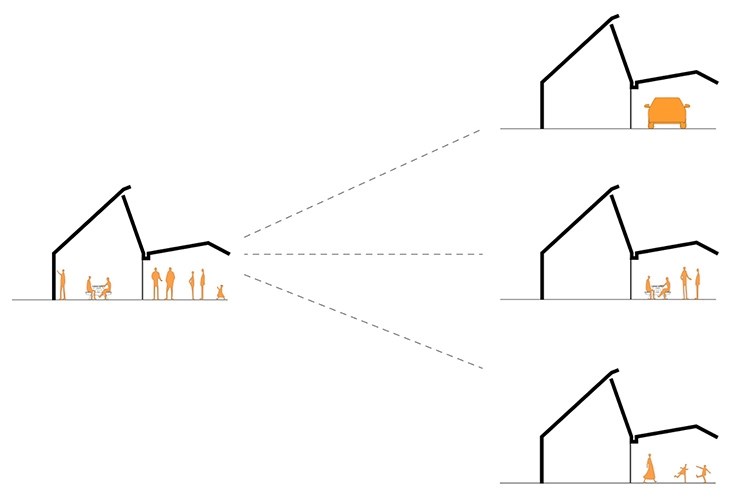 This is a schematic diagram of a sustainable 1,200- to 1,400-square-foot prototype module that represents its operation as a community development headquarters, as well as its potential transition to a single-family, affordable home.

A federal grant awarded to the Fay Jones School of Architecture and Design at the U of A will foster the development of sustainable, affordable mass timber housing prototypes for diverse regions throughout Arkansas.

The $250,000 Wood Innovations Grant awarded to the school from the U.S. Forest Service — and matched by funding from the U of A — will be used to establish a Housing Innovation Center at the university.

This bold project addresses multiple critical issues in Arkansas, including the need for affordable housing, sustainability, stewardship of the state’s forests and environment, expanded employment opportunities and economic development.

John Folan, professor and head of the Department of Architecture, is the principal investigator for this research grant and will lead the development of this center. He is the founding director of the Urban Design Build Studio and has done extensive work implementing replicable affordable housing units through university-affiliated design-build efforts over the past two decades.

Candi Adams, an architecture faculty member in the Fay Jones School, also will work on this project. Both she and Folan are licensed architects with professional design practices.

“This 2021 USFS Wood Innovations Grant, the second for the school in four years, is another significant step forward for us in our ongoing ‘Arkansas timber initiatives,’” said Peter MacKeith, dean of the Fay Jones School. “The school has advanced rapidly and significantly into national prominence through this initiative, and I congratulate professors Folan and Adams for their commitment in this next step. The confluence of our work in mass timber with our work in housing, community building and resilient design is a clear demonstration of the school’s commitment to the economic and environmental betterment of the state.”

“This award speaks to the innovative spirit of our faculty and students in the Fay Jones School,” said John English, vice chancellor for research and innovation at the U of A. “It will be thrilling to see the solution-oriented designs that will stem from this funding. I am very excited for the university to have such an impactful opportunity in the realm of architectural design.”

The planned Housing Innovation Center at the U of A will be an extension of the Anthony Timberlands Center for Design and Materials Innovation, which is in schematic design phase with Grafton Architects of Dublin, Ireland, and Modus Studio of Fayetteville and is slated to open in 2023.

The new applied research center, to be located in the university’s Windgate Art and Design District, will serve as the epicenter for the Fay Jones School’s multiple timber and wood design initiatives, house the school’s existing and expanding design-build program and fabrication technologies laboratories, and serve as the new home to the school’s emerging graduate program in integrated wood design.

The housing prototypes developed through the Housing Innovation Center will help address the acute shortage of affordable housing throughout the state and will use wood sourced in Arkansas. Prototype development will focus on the innovative use of wood framing, cross-laminated timber (CLT) systems and structural lumber in order to demonstrate the sustainability and cost efficiency in labor and production of wood products.

This grant supports the design and permitting of the first prototype, the Housing Innovation Incubator — a physical representation of the objectives of the center itself. The incubator will serve as a pilot project for broader housing aspirations by providing tangible evidence of advanced construction techniques using Arkansas-sourced wood and timber. It also will be an applied research and demonstration project in support of the center’s efforts to achieve equitable access to high-quality, dignified, attainable and affordable homes across the state.

The development of the Housing Innovation Incubator prototype will provide a proof of concept for sustainability and will promote awareness and implementation of wood as a sustainable building material. This will also seed later prototypes that integrate native wood products and technologies, reinforce local workforce training in wood framing and construction, and offer sustainable alternatives that significantly impact quality of life throughout the state. The center is currently researching and developing prototypes for both the Northwest Arkansas region and the timberlands region of south Arkansas.

In May, the U.S. Department of Agriculture announced the awarding of more than $15 million to fund grant proposals that would develop and expand the use of wood products, strengthen emerging wood energy markets and protect community forests. As part of that, the Forest Service Wood Innovations Grant program awarded $8.9 million to 44 projects in 23 states and Puerto Rico. Twenty-one of these projects focus on mass timber and cross-laminated timber, including the one at the U of A.

“This grant will be instrumental in supporting the realization of a significant demonstration project. Aspirations for the work align with numerous initiatives in play at the departmental, school and university levels — directly through the development of a replicable housing prototype that utilizes a renewable resource central to the state economy,” Folan said. “Indirectly, but more importantly, the funding will foster the development of cross-disciplinary collaboration across university that will establish an internal network of expertise capable of perpetuating future work and entrepreneurship.

“A parallel effort in organizing external expertise will enhance the collective intelligence that will be brought to bear in addressing a fundamental societal challenge. Having a federal agency like USFS understand the intersectional potency identified in the proposal was clearly an extension of infrastructure that is emerging at the Fay Jones School through the Anthony Timberlands Center for Design and Materials Innovation, and at the university with the Institute for Integrative and Innovative Research — the legacy of what has been accomplished historically through the Fay Jones School of Architecture and Design. The success reflects the efforts of many hands,” Folan said.

Arkansas, which is 57 percent forested, is poised to be a leader in the innovative use of mass timber in design and construction. Two recent construction projects on the U of A campus — the Library Storage Building and Adohi Hall, a student residential complex — were designed and constructed using mass timber.

Another big step in the state is the new Structurlam facility in Conway, which opened in June. It will supply the 1.1 million cubic feet of Arkansas-sourced mass timber material to be used in the planned Walmart corporate campus in Bentonville. Structurlam is a Canada-based company, and its new Arkansas plant joins another mass timber facility in the state, Texas CLT, which operates in Magnolia.

Arkansas is a microcosm of the United States, possessing a broad spectrum of economic circumstances in various regions of its 75 counties — including vast rural and generational poverty as well as extreme wealth and rapid growth. Regardless of demographics, every region of the state faces a need for more affordable housing options.

The Fay Jones School has received previous federal funding for timber and wood initiatives and research. Grants from the U.S. Forest Service Mass Timber University Grant Program and the U.S. Endowment for Forestry and Communities supported the 2019 design competition to envision the future Anthony Timberlands Center for Design and Materials Innovation.