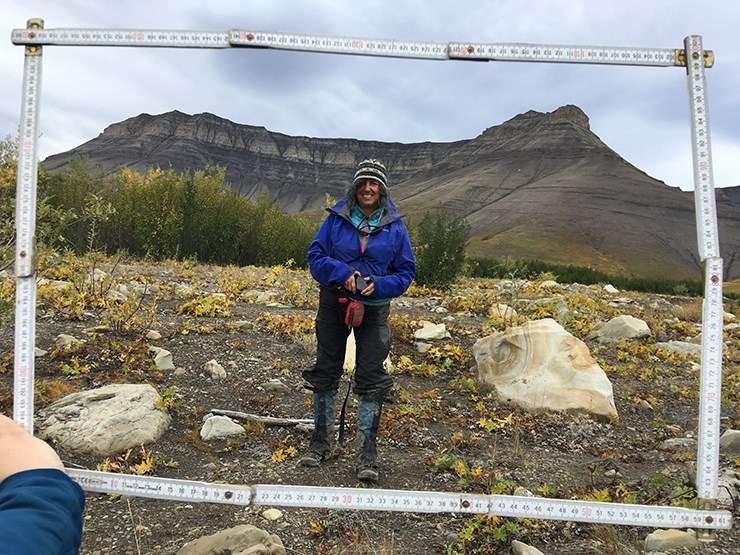 The National Science Foundation awarded more than $256,000 to study the effects of climate change on Arctic watersheds in the Aklavik Range of the Northwest Territories, Canada.

Jill Marshall, assistant professor of geosciences, will serve as co-principal investigator with Marisa Palucis and Justin Strauss, assistant professors of earth sciences at Dartmouth University. Together, the interdisciplinary team’s research will quantify the potential for climate change to drive the transfer of sediment from mountainous regions to hillslopes and rivers, with a consequent impact on local Gwich’in communities.

As temperatures rise, previously really cold rock (about 26 to 33 degrees Fahrenheit) will spend an increasing amount of time in the “frost cracking window,” hypothetically leading to amplified rates of rock weathering and sediment production.

Warmer temperatures are already leading to increased duration and magnitude of permafrost thaw, which the team posits will lead to a transition from sediment that creeps and flows downhill to more rapid and voluminous debris flows. This increase in rates throughout Arctic watersheds can impact communities and ecosystems due to increased landslide risks and the potential for this accelerated sediment supply to alter river habitat.

The researchers’ objectives are to:

Marshall noted that the two field sites are fairly remote — north of the 68th parallel and well inside the Arctic Circle on traditional land of the Gwich’in, a First Nations people. The team benefits from local community partnerships that make the research possible.  The field work season is dictated by the seasons - either when the Mackenzie River freezes and becomes an ice highway or when the site must be accessed by boat or helicopter. For characterizing sediment transport, the best time to visit the site is when the permafrost is transitioning from fully frozen to active transport, usually in April. But with climate change, formerly predictable ice or water transport routes have become harder to predict.

Marshall said the goal is to “quantify the rate at which the landscape is cracking, breaking apart and moving so we can develop predictive landscape models. This way we can anticipate future impacts and identify areas of greatest concern.”

The researchers will work closely with Gwich’in community members to collect field and historical data, including oral histories of the region. To promote STEM education with the younger generation of Gwich’in and U.S. undergraduates, the team will create and share ArcGIS StoryMaps. These StoryMaps will be generated in courses offered at Dartmouth College and the U of A (“Virtual Arctic Landscapes”). They will be designed to allow undergraduates at both institutions to experience the Arctic in an accessible and meaningful way.

About the Department of Geosciences: The Department of Geosciences traces its origin to 1873 when the first mineralogy course was offered at the University of Arkansas.  Our faculty and students examine the processes that form and shape Earth's surface, the natural resources we use, how water and ecosystems are interconnected, variations in climate and paleoclimate, the use and development of geospatial methods, and the human geography of ethnicity, gender, class, social inequity, and religion. The department earned $2 million in research awards in FY 2020, and our students benefit from over $3 million in endowed scholarship funds contributed by generous alumni and friends of the department. To learn more about the Department of Geosciences please visit our website.