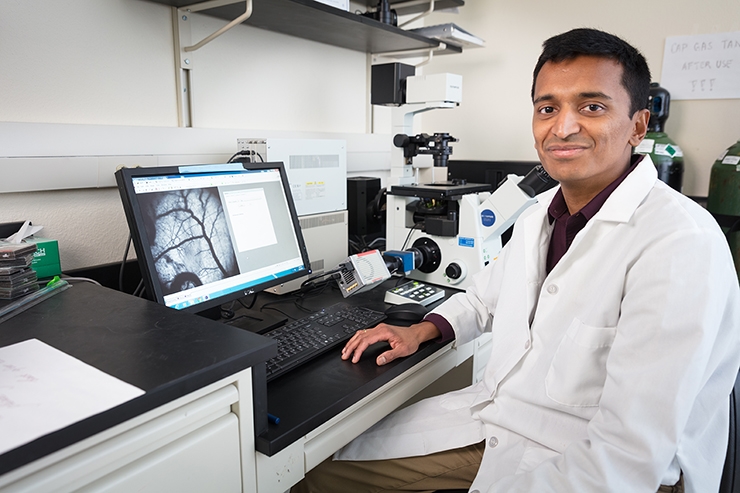 Narasimhan Rajaram, U of A.

Researchers at the U of A have demonstrated the first use of a noninvasive optical technique to determine complex biochemical changes in cancers treated with immunotherapy.

“We show that optical spectroscopy provides sensitive detection of early changes in the biomolecular composition of tumors,” said Narasimhan Rajaram, associate professor of biomedical engineering. “This is important because these changes predict response to immunotherapy with immune checkpoint inhibitors. Thus, our work is the first step in determining whether Raman spectroscopy can identify treatment responders and non-responders early during the course of therapy.”

The study, published in Cancer Research, a journal of the American Association for Cancer Research, describes the use of Raman spectroscopy to determine the molecular composition of colon cancer tumors in mice treated with two types of immunotherapy drugs currently used in the clinical treatment of patients.

Raman spectroscopy uses optical fibers to direct near-infrared laser light to biological tissue. The Raman signal scattered from the tissue is especially sensitive to the molecular composition of the tissue.

For this study, the researchers used machine-learning approaches to train hundreds of Raman datasets acquired from colon cancer tumors treated with different immunotherapy drugs. They then tested the data from each tumor against the overall dataset to determine the difference between tumors that had received various types of immunotherapy and tumors that did not receive any therapy.

The Raman technique demonstrated sensitive detection of early changes in the biomolecular composition of tumors and differentiated tumor response to different treatments. Changes picked up by the non-invasive Raman probe were consistent with changes described by detailed tissue analysis, the researchers found.

Unlike other forms of cancer treatment, immunotherapy does not result in an immediate and predictable reduction in tumor size, and there are currently no accurate methods to determine treatment response in patients. Only a small group of patients benefit from immunotherapy, and there are severe side effects associated with specific combinations of immunotherapy.

Rajaram partnered with Ishan Barman, associate professor of mechanical engineering at Johns Hopkins University, and Alan J. Tackett, deputy director of the Winthrop P. Rockefeller Cancer Institute and professor of biochemistry at the University of Arkansas for Medical Sciences. Joel Rodriguez Troncoso, graduate student in biomedical engineering at the U of A, and Santosh Kumar Paidi at Johns Hopkins University were lead authors on the paper.

In addition to Rodriguez Troncoso and Kumar Paidi, co-authors of the paper were Paola Monterroso Diaz, Jesse D. Ivers and David E. Lee at the U of A; Piyush Raj from Johns Hopkins University; and Nathan L. Avaritt, Allen J. Gies, Charles M. Quick and Stephanie D. Byrum from the University of Arkansas for Medical Sciences.