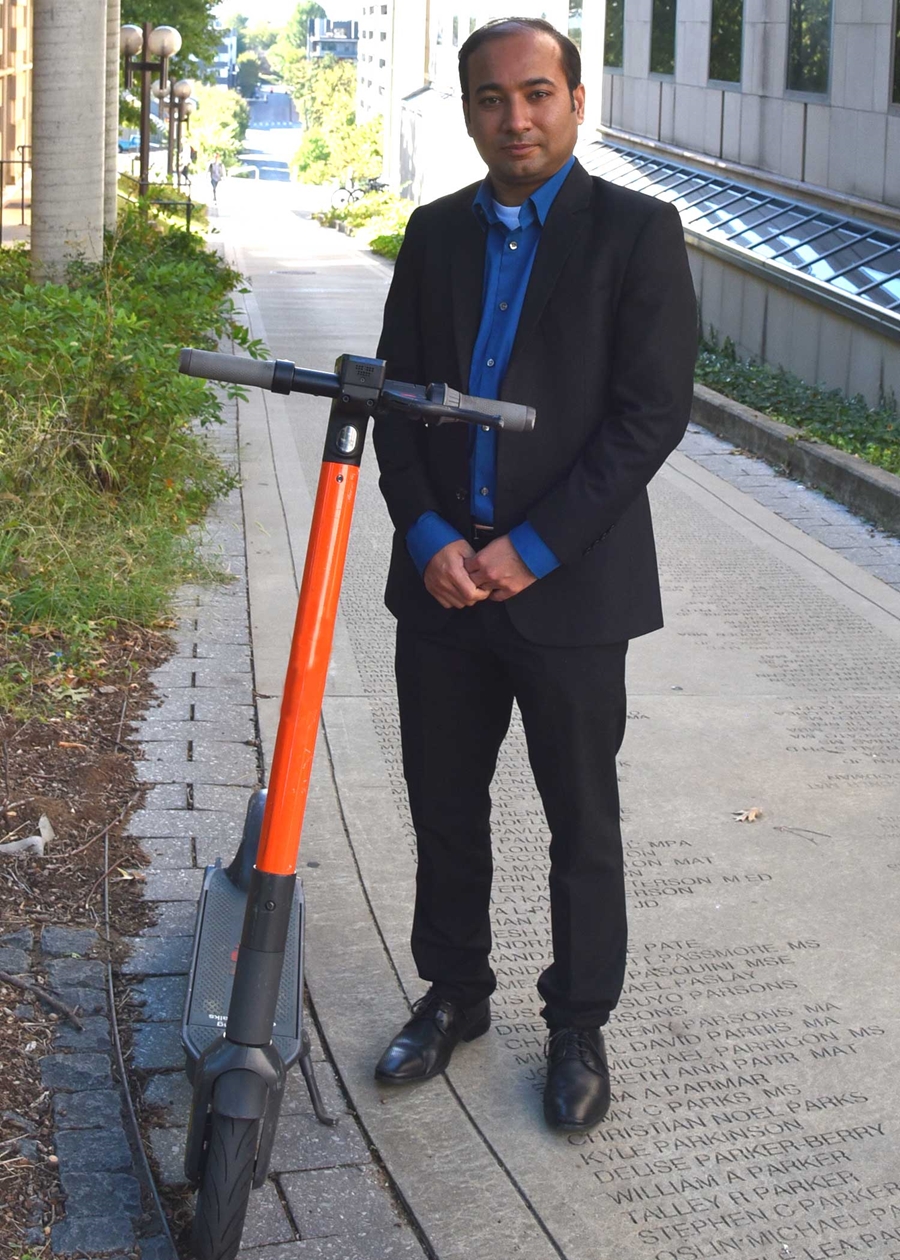 Suman Mitra, assistant professor of civil engineering, poses with an e-scooter similar to the types of scooters that will be deployed in several Fort Smith neighborhoods as part of a research study to begin in January.

Early next year, an engineering researcher and community partners will deploy seven stations equipped with electric bikes and e-scooters in low-income Fort Smith neighborhoods where 65% of residents don't have a vehicle or access to reliable public transportation.

More than 70% of residents told researchers they are interested in using these so-called "shared micromobility services" when they were surveyed for the study, which is funded by more than $1 million in National Science Foundation grants.

The study has many practical implications, said principal investigator Suman Mitra, an assistant professor of civil engineering at the University of Arkansas. It will help determine strategies and policies to guide local governments, and community and business leaders, in establishing micromobility services in small cities like Fort Smith. It's also likely to improve access to jobs and essential services like health care in neighborhoods where per capita annual income is $20,256, well below the national average.

"This project provides me an opportunity to do something that I always want to do as a transportation researcher — work directly with the community to solve a real-world problem that can improve the livelihood of the local community as well as advance scientific knowledge," Mitra said. "I am very excited and grateful to receive these grants from the National Science Foundation. I have a team of excellent researchers, and I want to thank everyone who worked hard during the planning phase of this grant."

Reese Brewer, director of Frontier MPO and co-principal investigator of the project, said it's an honor to be part of the study.

"By shining a spotlight on the difficulties to connect low-income citizens to shared micromobility services, we can then begin to address longstanding transportation inequities and injustices," Brewer said. "To be part of transformative ideas and change is immensely rewarding, especially when the project can positively impact diverse and often neglected neighborhoods."

National Science Foundation first awarded the researchers a $50,000 planning grant through the CIVIC Innovation Challenge program, which helped pay for an extensive community engagement process including workshops, surveys and a series of virtual education and development sessions. The researchers also gathered baseline data to identify community strengths, needs and barriers regarding access to transportation and selected high-priority neighborhoods that could benefit most.

The project is expected to begin offering micromobility services in January. The electric bikes and e-scooters will be free for a time before researchers test three pricing and incentive strategies. The pricing scheme found to produce the most balanced profitability and affordability will be presented to the community in workshops to solicit final input on its potential for long-term implementation.

"Our plan is to develop a sustainable revenue model so that the city can continue the service after the pilot," Mitra said.

In addition to Mitra and Brewer, other co-principle investigators for the project are: Sarah Hernandez, associate professor of civil engineering; Rogelio Garcia Contreras, director of the Social Innovation Program in the Walton College of Business;  and Elizabeth McClain, chief wellness officer at Arkansas Colleges of Health Education.