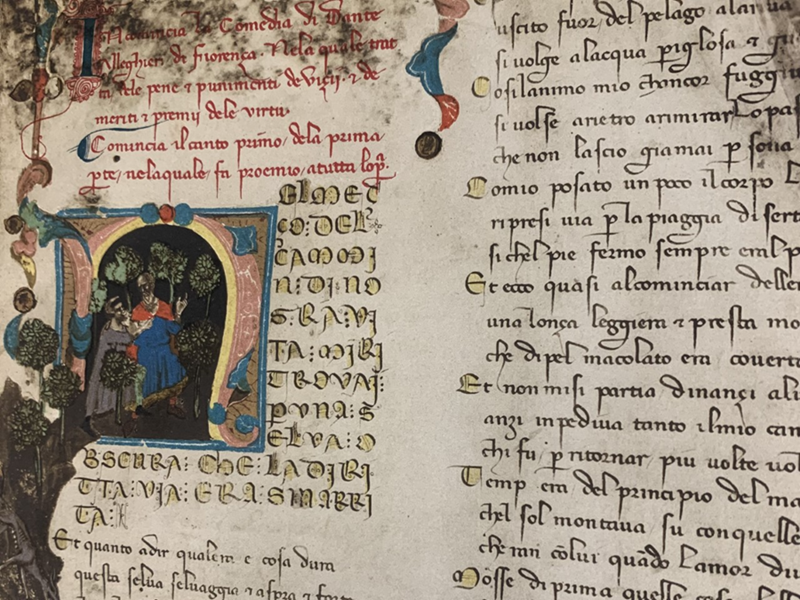 A 1921 facsimile reproduction of the "Codice Trivulziano 1080," issued for the sixth centenary of Dante's death and preserved at the Biblioteca Trivulziana in Milan. From Special Collections.

A new exhibit curated by the University Libraries Special Collections Division and the Italian Program in the Department of World Languages, Literatures and Cultures is now on display in the lobby level of Mullins Library. "Illuminating Dante" commemorates the 700th anniversary of Italian poet Dante Alighieri's death (1265-1321) and celebrates Italian American Heritage and Culture month in October.

Presented from October 5-31, the exhibit consists of 22 items from Special Collections, including a recently acquired 1520 exemplar of the Divine Comedy with commentary by Cristoforo Landino, one full-page woodcut illustration and 98 smaller woodcuts introducing each canto. Also on view are various editions of Dante's masterpiece in Italian and English, with illustrations by Gustave Doré and John Flaxman, and works connected to or inspired by the Divine Comedy, including a collection of poems by Vittoria Colonna (1548) and a treatise by Lucrezia Marinella (1601).

The exhibit includes medieval, early modern and modern illustrations of the Divine Comedy, ranging from 13th-century illuminations to Sandro Botticelli's and William Blake's illustrations. Finally, the exhibit displays works that explore the reception of Dante's masterpiece across cultural contexts, with works from countries including Spain and France. Examples from the African American community are represented, as well.

Students in Italian 4123, "Dante: A Journey Between Visions and Words," were involved in the organization of the exhibit. In small groups, they were given their choice of several possibilities for research; then, meeting in the Special Collections area of Mullins Library, they viewed a variety of Dante artifacts. Students compared and contrasted illustrations from various time periods, and two groups, with advanced knowledge of Italian, compared prose and verse translations of specific passages and transcribed the initial paragraphs of a manuscript copy of the Divine Comedy.

"Our university's Special Collections area is exceptional," said Stephen Meehan. "To be able to look through a 500-year-old edition of Dante's Divine Comedy and related works brought an enhanced learning experience to our class."

"I really liked this experience that we've had," said Pablo Linares de Avila. "It gave our work so much more meaning. I had never got in contact with books as old."

The Consulate General of Italy, in Houston, Texas, serves as patron of the exhibit. Additional information is available on the Illuminating Dante website.

Questions may be sent to Joshua Youngblood and Kara Flynn in Special Collections or Ryan Calabretta-Sajder and Daniela D'Eugenio in the Department of World Languages, Literatures and Cultures in the Fulbright College of Arts and Sciences.