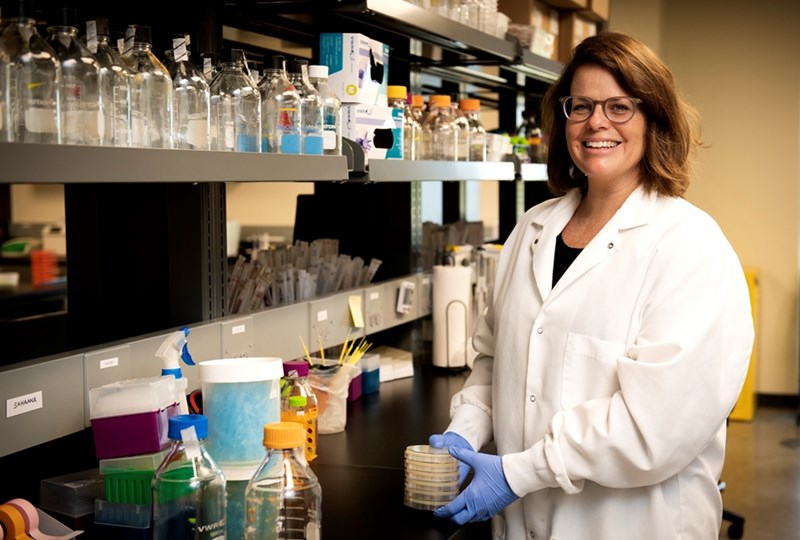 FAYETTEVILLE, Ark. – Arkansas researchers are working to answer one of the leading questions on Americans' minds as the country struggles to recover from the ordeal of COVID-19: Is it safe to eat out?

Gibson, an associate professor of food science and microbiology for the Arkansas Agricultural Experiment Station, is leading a multi-institutional research effort to ensure that restaurant dining rooms do not contribute to the spread of SARS-CoV-2, the virus that causes COVID-19. The U.S. Department of Agriculture National Institute of Food and Agriculture awarded a $987,000 Rapid Response grant to Gibson last year to fund the two-year research project.

Gibson is the lead investigator in the effort that includes collaborators within the Agricultural Experiment Station, Clemson University and the Centers for Disease Control and Prevention.

Gibson said the goal of the two-year project is to provide scientific evidence that the COVID-19 precautions employed by the foodservice industry protect their customers.

Protection against COVID-19 in restaurants relies primarily on Food and Drug Administration food safety standards. But Gibson said those measures apply mainly to "back of the house" spaces where food is handled — kitchens, food storage and dishwashing areas.

"Our research is aimed at the 'front of the house,'" said Baker, a post-doctoral research associate who is heading up the research in Gibson's lab. "These are the dining rooms and related areas where the diners are."

The target areas of Baker's research include the surfaces that diners touch and the hands that do the touching. For a study published recently, he placed a known amount of a surrogate virus on subjects' hands. The surrogate is a bacteriophage called Phi-6, a harmless microorganism that mimics the structure and persistence of SARS-CoV-2.

Baker identified the most reliable tests for recovering consistent virus samples from hands. He also found that timing was critical. Immediately after application, 83 percent to 87 of the virus surrogate was recovered from test subjects hands. When tested five minutes later, recovery dropped to 51 percent to 55 percent. The variation in the percentage of recovery depended on the method used to recover the virus from the subjects' hands. After 10 minutes, virus particle recovery dropped to 32 percent to 38 percent.

"Virus recovery from human skin can depend on several factors," Baker said. It can depend on the virus, the amount initially applied to the skin, the size of the virus droplets, skin characteristics, temperature, and relative humidity.

Gibson said the next step is to test transfer from hands to surfaces.

"We know that transfer from human to surface happens when an infected person sneezes, coughs or even speaks," Gibson said. "These actions expel droplets containing the virus onto nearby surfaces. Or a person may transfer the virus first to their hands, and then touch a surface."

They will also test transfers from surfaces to humans, as when a person touches a surface that an infected person has just contaminated.

They are testing different surfaces commonly found in restaurant public areas, including metal, fabrics, wood and other materials. They are even testing carpeting. "We had to determine what materials were most relevant and what 'holes' exist in other studies," Gibson said.

Stainless steel makes an excellent control to compare results from other studies, Gibson said. "A lot of research has already been done on recovering viruses from stainless steel because of its prevalence in food preparation areas. It's not that common in the dining areas, but it makes a good comparison to see how our work fits into other studies."

Baker said they are also testing different media in which SARS-CoV-2 transfers from human to surface and back to human. Various organic substances can affect how long the virus survives on exposed surfaces.

"We use an organic media that is basically artificial saliva," Baker said. Saliva is the most common means of transfer as humans spew virus-bearing droplets.

Gibson said other media must be tested as well, including a substance that mimics fecal material. "This has a lot to do with hand hygiene habits like washing hands after using the bathroom."

Baker said they aim to measure how long the virus persists at each stage when transferring from nose or mouth to hand, to surface, to another hand and back to another person's mouth or nose. They also want to determine the best timing and methods for recovering virus particles from each stage.

"We are also looking at sequence transfers," Baker said. "How many surfaces can you touch before the virus is no longer detectable."

Gibson said the time element is important because tests in multiple labs have already shown that tests can't detect SARS-CoV-2 after 30 minutes.

That begs the question of whether COVID-19 can still infect a person even after live virus particle levels are too low to be measured. "Based on methods we have in use," Gibson said, "we can detect the virus down to five particles under ideal conditions."

She said the surface type makes a difference. In earlier research, she found it harder to recover particles from surfaces like carpeting than from steel or plastic.

"Then the issue is, does it matter?" Gibson said. "If we can't detect it, does it still transfer to people at infectious levels?"

The NIFA-funded project is halfway through its two-year research effort. Once completed, Gibson said the experiment station and the other participating institutions would integrate their findings to develop a national action plan and disseminate it through the Association of Food and Drug Officials, the FED, other state and federal agencies, and hospitality organizations.

The AFDO and the Society for Hospitality and Foodservice Management support the project and will help disseminate their findings, Gibson said.

Gibson said the team developed a fact sheet to help the food service industry use U.S. EPA List N (https://bit.ly/3k8U7Oy) to find appropriate disinfectants for use in their businesses. "There are currently 570 products listed," she said. "Many of those, but not all, are tested specifically against SARS-CoV-2."

Gibson said researchers whittled down the list to the disinfectants that will work best for the foodservice industry and developed a decision matrix based on surface type, the active ingredient, ease of procurement and level of occupational health hazard.

The fact sheet is available from the Division of Agriculture: https://bit.ly/AAES-COVIDdisinfectantlist.