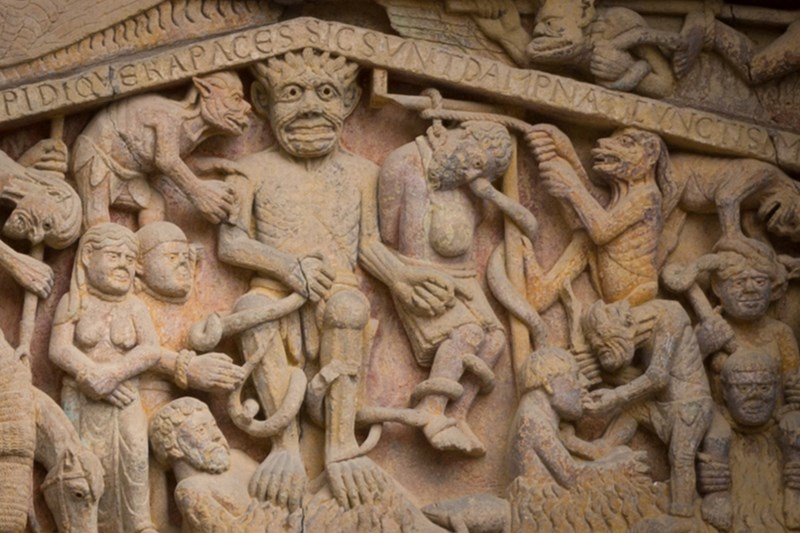 In this detail from the tympanum of the Abbey Church of Sainte-Foy in Conques, France, a usurer is shown to the devil's left, hung by his money bag.

According to the PEW Research Center, the wealth gap between America’s richest and poorest families more than doubled from 1989 to 2016.

This accumulation of wealth in the hands of a few is a perennial problem that has bred unrest, and it will be part of the focus of a public lecture being offered by the U of A Honors College next week.

Sharon Foster, the Sidney Parker Davis Jr. Professor of Law, will lead the discussion titled, “Economic Thought & Competition Law,” exploring those topics in the ancient period and the Middle Ages.

The public lecture will be offered online via Zoom at 5:15 p.m. on Wednesday, Sept. 22. Please fill out this online interest form to gain access to the lecture.

“We have a wealth concentration problem,” Foster said. “It causes economic instability; it causes political instability and civil unrest. Are we seeing that now? What can we learn from the past about what to look for and what to do to correct some of these instabilities? Competition law has provided a lot of insight to many of these issues.”

BIRTH OF THE MONOPOLY

Economic thought is the study of what economists thought happened, what did happen or what was about to happen within a particular economy.

Though no story of an actual cartel or monopoly in ancient Mesopotamia exists in the historic record, the Reforms of Urkagina, king of the city-states Lagash and Girsu in Mesopotamia, circa 2400 B.C.E., mention political corruption caused by the concentration of wealth in the hands of the few, concerns that are reflected in modern antitrust case law.

Similarly, other legal codes from ancient Mesopotamia address economic justice in terms of preventing high monopolistic prices. In the Bible, Genesis 37: 1-11 depicts the story of Joseph interpreting the dream of Pharaoh, which some have described as a story about a grain monopoly.

The study of economic thought from the ancient period and the Middle Ages provides a rich understanding of the origins of competition law, or as it is known in the United States, antitrust law.

“It’s an extremely long period of time,” Foster said, “but it's a period of time that really hasn't received a lot of attention from scholars.”

In Foster’s Signature Seminar, students will analyze economic thought starting with the ancient city-states of Mesopotamia from around 2402 B.C.E. through the Middle Ages, ending in 1400 C.E.

The primary focus will be on economic thought regarding cartels and monopolization as expressed through ancient codes, biblical sources, canon law, philosophical writings and literature. Through these sources from the ancient period and the Middle Ages, this Signature Seminar will elucidate the connection between early economic thought and modern economic theory as it applies to competition law.

“I see the parallels with respect to the concentration of wealth in the hands of the few as creating economic instability, and ultimately, political instability,” Foster said. “In particular, after the financial crisis of 2008, we've seen that a lot of people were displaced economically. They lost their homes, they lost their jobs, they had to stop going to school. And we've seen a wider gap between the wealthy in some countries and the poor. And we've also seen a shrinking of that middle class where people were economically well off.”

Conditions worsened when the pandemic began in 2020, thanks to labor shortages.

However, there were some signs of a recovering economy — including higher wages and a growing middle class.

“Having a strong and robust middle class means that actually in the long term, the economy is going to be healthier longer, because we have more people working, buying things and contributing to the gross domestic product,” Foster explained.

Sharon Foster joined the School of Law faculty in 2000 and became a tenure-track assistant professor in fall 2006. Prior to her arrival, she was an adjunct professor at Loyola Law School in Los Angeles from 1998 to 2000. She taught in the Legal Research & Writing Program and has offered courses in international legal research and international finance. She has also coached the Jessup International Law Moot Court team.

Economic Thought and Competition Law is one of two Honors College Signature Seminars scheduled for Spring 2022.

Deans of each college may nominate professors to participate in this program, and those who are selected to teach will become Dean’s Fellows in the Honors College.

Honors students must apply to participate, and those selected will be designated Dean’s Signature Scholars. The course application is posted online on the Signature Seminars web page. The deadline to apply is Monday, Oct. 25.