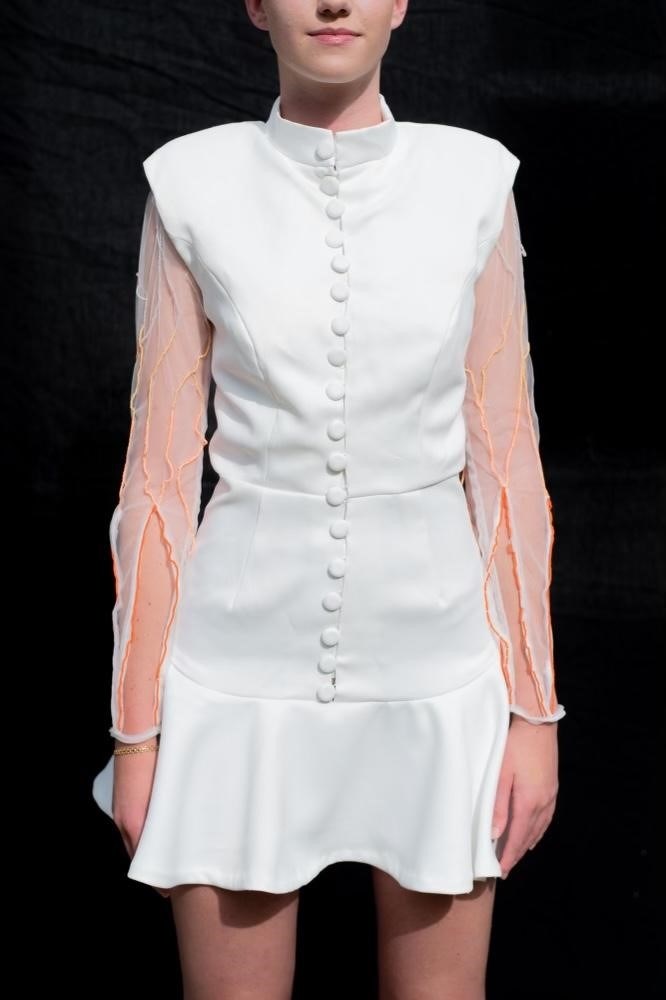 Bailey Hoyt's grandfather served in the military during the Vietnam War. Her design is intended to illustrate the spreading of Agent Orange: "I wanted it to look like Agent Orange is going into the body's veins and is affecting the person more and more, but I wanted the orange to not be eye-catching, showing how the disease can stay dormant in the body for many years."

Two recent graduates of U of A's apparel merchandising and product development program have been recognized by the International Textile and Apparel Association in separate areas.

Murphy Aycock has earned a 2021 Paper of Distinction Award in the Merchandising/Retailing II category from the ITAA, and Bailey Hoyt has been selected to show a garment she designed in the ITAA Undergraduate Design Exhibition.

Aycock's paper, "Understanding Online Second-hand Luxury Fashion Shopping Motivations and Perceived Value among Young Adult Consumers," was developed from her master's thesis, which was funded by the A.L. Chilton Foundation. She studied young adult consumer motivations and perceived value toward online second-hand luxury fashion retailers, and how it led to behavior patterns.

According to her research, the second-hand luxury fashion market is growing four times faster than the primary luxury market.

Hoyt's design, Agent Orange, is one of just 88 entries nationally selected for display at the 2021 ITAA Conference. She was mentored by instructor Stephanie Hubert.

Entries were reviewed by a double-blind jury and evaluated on contextual review and concept; aesthetic properties and visual impact; process, technique and execution; cohesion; and design contribution and innovation.

Hoyt's concept statement regarding her design includes: "According to History.com, (2011), 'in addition to the massive environmental devastation of the U.S. defoliation program in Vietnam, that nation has reported that some 400,000 people were killed or maimed as a result of exposure to herbicides like Agent Orange.' The residue remains today and is still risking the health of those who live in the area. My intent behind this garment was to bring awareness to the harmful effects of Agent Orange. The chemical was released into Vietnam by U.S. troops from 1961-1971. The purpose of this chemical was to destroy Vietnam's land and vegetation, but it ended up destroying so much more. For me, this chemical took my grandpa away from me, giving him cancer that ended his life last year. It is crazy for me to think about how he barely survived while he was forced to fight there, only to then die from the impact of that same war years later. This chemical has affected many Americans in the same way and has an even larger impact on the Vietnamese people. 'Vietnam claims half a million children have been born with serious birth defects, while as many 2 million people are suffering from cancer or other illnesses caused by Agent Orange (History.com, 2011).' The war may be over, but the casualties caused by it continue on."

The apparel merchandising and product development program is part of the School of Human Environmental Sciences, which is housed in U of A's Dale Bumpers College of Agricultural, Food and Life Sciences.