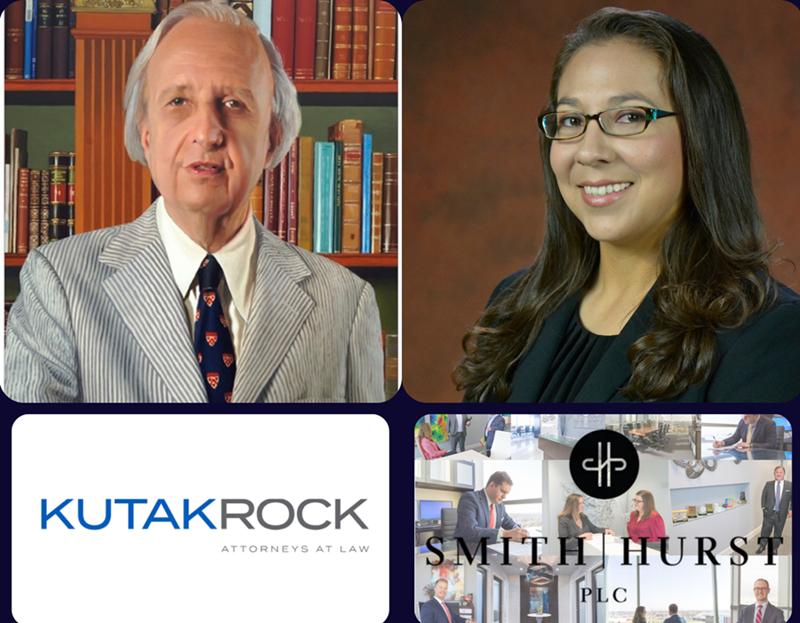 This year, the board will honor the accomplishments and contributions of two alumni and two law firms. Morris Arnold (J.D. '68) will receive the Commitment to Justice Award, Alayna Farris (J.D. '16) will be given the Early Career Award, Kutak Rock, LLP will receive the Career Champion Award - Large Firm (10+) and Smith Hurst, PLC will be given the Career Champion Award - Small Firm (less than 10).

Judge Morris Arnold graduated first in his class from the U of A Law School where he served as editor-in-chief of the Arkansas Law Review in 1968. In 1969, he received his LL.M. degree from Harvard and the following year, was appointed a Teaching Fellow in Law at the Harvard Law School. In 1970, he was awarded a Knox Fellowship from Harvard to study at the University of London.

Arnold has taught at Indiana University Law School where he briefly served as dean as well, University of Pennsylvania where he also served as associate dean of the law school and vice president of the university and was appointed Ben J. Altheimer Distinguished Professor of Law at the University of Arkansas at Little Rock. He was a visiting professor at the Stanford Law School and taught in the summer schools of the University of Texas and the University of Michigan. In 1978, he was a member of the faculty of laws of Cambridge University and a Visiting Fellow Commoner at Trinity College, Cambridge. He has published 10 books and numerous articles, mostly on the subject of English legal history and colonial Arkansas.

Alayna Farris, a citizen of the Cherokee Nation, joined the Office of the Attorney General in October 2016 and serves as an Assistant Attorney General. She provides in-house counsel duties for the Cherokee Nation, along with representing the Nation in federal, state and tribal courts. She is also a strong advocate for the Indian Child Welfare Act.

Prior to joining the Office of the Attorney General, Farris clerked for the Native American Rights Fund, more commonly known as NARF, and the Cherokee County District Attorney's Office. As a clerk for NARF, she focused on protecting tribal natural resources and promoting Native American human rights. While at NARF, Farris was selected as one of the recipients of the Siletz grant due to her "tireless work ethic and [her] voluminous work product."

Prior to joining law school, Farris worked for the Cherokee Nation Indian Child Welfare program as a child welfare specialist. She advocated for the rights of Cherokee children in state courts. Her passion for protecting the rights of Cherokee children and her tribe began here and led her to pursue a law degree to further protect those who cannot advocate for themselves. Farris has dedicated her career to serving her Native American community and looks forward to making a positive impact in Indian Country.

Farris and her husband, Zak (Cherokee and Cheyenne River Sioux), live in Tahlequah with their children, Zoey and Evan.

Kutak Rock, LLP is dedicated to enhancing legal education and providing opportunities for students to work within the firm. Their attorneys started the Doc Talk series with the law school's Business Law Society. The Doc Talk series brings attorneys into the classroom twice or thrice a semester to review typical business legal documents and real-world examples that directly relate to materials being studied. This program began five years ago, with plans to continue this academic year. Each summer, Kutak Rock LLP hosts the Summer Pre-Law Program (SPPARK).

In addition to their volunteer service activities, Kutak Rock LLP is a generous financial supporter of the law school. In memory of their colleague, the firm started the Kutak Rock Nicholas J. Alexander Memorial Scholarship Endowment for students who demonstrate academic excellence and community involvement. They provide lunch for the students participating in Doc Talks and sponsor travel for the Transactional Competition Team. Kutak Rock's service and financial support has been invaluable to the law school.

More than 50 years ago, Kutak Rock's founders set out to create a different kind of law firm — where attorneys are empowered and entrusted to practice law with an entrepreneurial spirit, are committed to doing what is right for clients and are dedicated to putting high-quality legal service within reach. As of January 2021, it had more than 500 attorneys in 18 offices across the U.S. In 2020, Kutak Rock, LLP was ranked as the 94th largest law firm in the U.S. based on number of attorneys and 124th based on revenue. Kutak Rock, LLP is ranked as one of the best law firms for female equity partners with over 25 percent of the firm's equity partners being female. The firm has earned the title of one of the "Best Places to Work for LGBTQ Equality" and for multiple years has received a perfect 100 score on the Human Rights Campaign Foundation's Corporate Equality Index.

Smith Hurst, PLC has been a long-time supporter of legal education at the U of A School of Law. Founded by two alumni, the firm has exclusively hired U of A School of Law graduates and annually welcomes students from the law school to clerk for the firm. Both Jim Smith and Rebecca Hurst have served as adjunct faculty members and have continued to provide mentorship to law students. They have also welcomed first-year law students into their home during orientation, served on various committees for the law school and are members of the Dean's Circle Giving Society. The school of law is grateful for their continued involvement and support.

Smith Hurst, PLC is a leading regional business and private wealth law firm based in Northwest Arkansas. The firm's suite of legal practices encompasses mergers and acquisitions, entrepreneurial, business and corporate-based law, real estate, tax law, and asset protection and estate planning. The foundation of Smith Hurst is a cohesive team of lawyers who share an attitude of excellence in serving clients, helping them achieve their business and personal goals, and working to solve their most important problems.

About the Awards: Alumni who, through personal achievement and service to the law school, their community, and the legal profession, have brought honor and distinction to both themselves and the School of Law may be honored with the Commitment to Justice Award (for those who have been out of law school for 10 years or more) or the Commitment to Justice Early Career Award (for those who graduated less than 10 years ago).

The Career Champion Award recognizes a firm or organization that has provided significant, consistent contributions toward the advancement of career services and student programming. Contributions could include activities such as engaging in career programming, posting jobs or externships, participating in on-campus interviewing, having regular representation at networking events, hosting a networking event, sponsoring academic programming or supporting law school events. Large firms (11 members or more) and small firms (10 members or less) are considered separately.

The Law Alumni Society Board will recognize the 2021 and 2022 award recipients at the Awards Dinner in April 2022 during the School of Law Alumni Reunion Weekend. Nominations for the 2022 awards are now open. For more information about the awards, recipients, or to submit a nomination, please visit the awards webpage.