Civil Engineering and the Science of Destruction 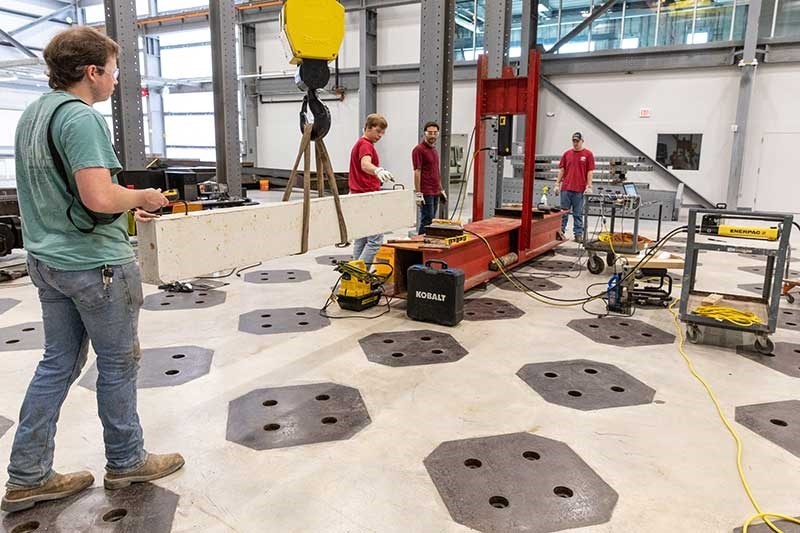 Caleb Chesnut uses a crane to hoist a beam into position for testing at the Harvell Civil Engineering Research and Education Center.

"I was always into Legos," assistant professor of civil engineering Cameron Murray explains as four graduate students rig an 800-pound concrete beam with sensors. "A lot of engineers were. Eventually, my dad suggested I get into engineering. So I took a class in structural engineering and really enjoyed how practical it was — discovering what factors contributed to failure."

Failure. That's the goal of today's enterprise at the new Grady E. Harvell Civil Engineering Research and Education Center — or CEREC — in the Arkansas Research and Technology Park. Under Murray's watchful eye, Caleb Chesnut, a master's student in civil engineering at the University of Arkansas, is going to break two concrete beams with a hydraulic ram. The beams are made of rapid setting concrete — known as high early strength concrete in the industry — though they've been curing for a year. The team is interested in several things: how does rapid setting cement, which has only been around since the 1970's, compare to the industry-standard portland cement, which has been around since 1824? Specifically, at what point does shear failure occur and is there much difference between the two cements? Also, do they produce comparable values after at a week, a month, a year?

As the name implies, rapid setting cement shows superior strength in the short term. After 24 hours, it can withstand 4-5 times as many pounds per square inch as portland cement. But is this a case of the tortoise and the hare? That's partly what the researchers are trying to determine. Murray notes that it can take up to 28 days for portland cement to reach its full design strength. That means it can take up to a month for a bridge deck to gain acceptable strength after it's been poured. But what if that could be done in half or even a third the time?

"Fast is important," Murray explains. "Lots of infrastructure in this country needs to be repaired. If we can cut months out of the construction schedule, that's important."

Chesnut, a native of Tulsa who also earned a bachelor's from the U of A,  notes that there's not much standardization among different brands of rapid setting cement. "Every company who makes it has a trade secret," he explains, "so there are different formulations. It's hard to look at each other's research because we use different mixes." The ability to break new ground — or concrete — makes it an intriguing avenue of research.

Comparing the two cements is also not as simple as determining which is stronger. Chesnut notes that while the two cements have demonstrated similar compressive strength — the ability to withstand loads that lead to a material's compression — the rapid setting cement deforms much more than portland cement. "The question is 'Why?'" Chesnut continues. "What's happening on the microstructural level?" While this question won't be answered in his thesis, it's the kind of question that led him into civil engineering in the first place.

Chesnut credits the North End Zone Expansion of Donald W. Reynolds Stadium with turning him to civil engineering. He was originally a finance major, and he used to walk by the stadium construction zone on his way to class. As work on the end zone progressed, Chesnut started wondering "why they're doing certain things, how they're doing them, and how do they know it will stand?" Inspired by these questions, he made the jump to civil engineering. He ended up taking a concrete design class taught by Murray, which led to still more questions: why did rapid setting cement gain strength so fast? Why do things behave the way they do? "Some people fall in love with research because every answer leads to five more questions," he says.

When the team is ready, they begin to apply downward pressure through a blunt-nosed steel ram. The beam has not been reinforced with steel stirrups, which would normally help prevent shearing. This is the application of a simple point load to determine what the concrete can withstand. Pressure is applied in load steps of roughly 2,500 pounds. Small cracks begin to appear around 10,000 pounds, which the grad students mark with black pens. The fractures spread as pressure is increased to 12,500 and then to 15,000 pounds. By 17,500 pounds, they can tell exactly how and where the beam will break, though it doesn't fail until reaching 26,000 pounds.

If, as Bill Bryson suggested, the Boston freeway system was designed by someone who "had spent his childhood crashing toy trains," then you may be tempted to think CEREC was designed by people who enjoyed destroying their Legos as kids. Sure, it's a testing and research facility, but the goal is ultimately to push materials to their breaking point to better understand how and when it happens in the real world.

The cavernous, 37,400 square foot facility is a major upgrade from their previous digs, where they often had to work outside due to limited space and use a bulldozer to move beams. Now they have 25-ton crane overhead to manipulate steel and concrete members. Experiments like this, done in less than two hours, took twice as long at the previous location — as long as it wasn't raining. In which case, they weren't done at all.

Chesnut says of the new center, "It's an incredible gift." He commends the Arkansas Academy of Civil Engineers, of which Grady Harvell is a member, for their philanthropy. "It's amazing to have a facility like this and group like that who are so dedicated to the next generation." In fact, Chesnut says scholarships created by the academy are the reason he's earned a degree without needing to take out loans.

Following the test of the first beam, a second beam of the same age is craned into place and put through the same load steps, again failing around 26,000 pounds. Altogether, Chesnut will break 18 beams in cohorts of two. He has four more to break by the end of summer, at which point he will begin writing his thesis based off his data. He plans to graduate in December and then go to work in structural engineering. "I want to see how things work in the real word before someday coming back to do research and get a Ph.D." He adds that his wife, a critical care nurse, will go to graduate school while he works, since that's what she's been doing while he's earning his master's.

Perhaps a future avenue of research for Chesnut is in the area of CO2 emissions. He notes that rapid setting cement "has about 40% less emissions than the production of portland cement, which is responsible for an estimated 8% of global emissions. So in a world where we're looking to lower our emissions, our role as engineers is to find new materials and methods to reduce our carbon footprint, including a more eco-friendly cement."

After the second beam is broken, Murray suggests they leave it in place. Later that day, CEREC will be officially dedicated, with many members of the Arkansas Academy of Civil Engineers expected to attend. Two hundred chairs, barely covering a third of the facility's four-foot-thick strong floor, have already been set out for guests. Murray's reasoning for leaving the beam is clear: this is a group that will properly appreciate a scientifically destroyed beam. After all, they've given generously to ensure it happens faster, more efficiently and in-state (the state of Arkansas and the Arkansas Department of Transportation also provided significant funding).

The Russian anarchist Mikhail Bakunin famously said, "The joy of destruction is a creative joy," perhaps applying a philosophical veneer to what every 14-year-old hooligan intuitively understands. While the crew down at CEREC might hesitate to admit they enjoy breaking things, they can take comfort in knowing that a little destruction could go a long way toward saving time, money and maybe even lives. 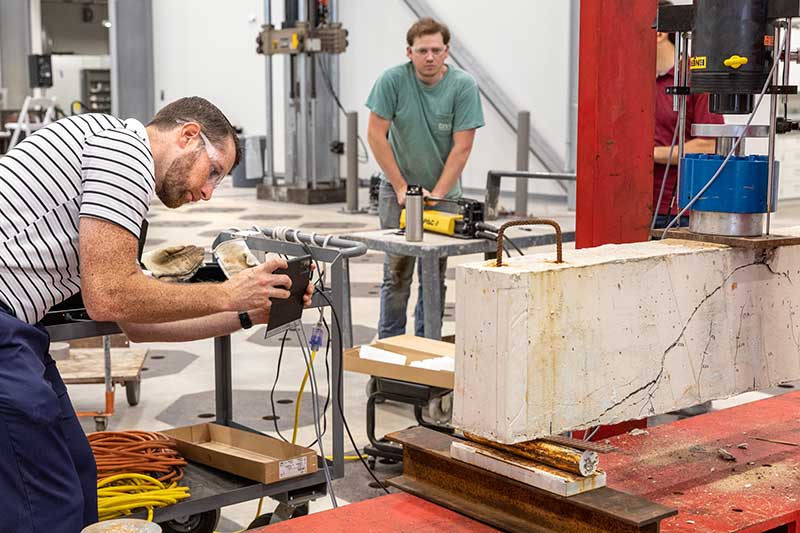 Cameron Murray, in foreground, documents fractures in a concrete beam as Caleb Chesnut, in the background, works the hydraulics.