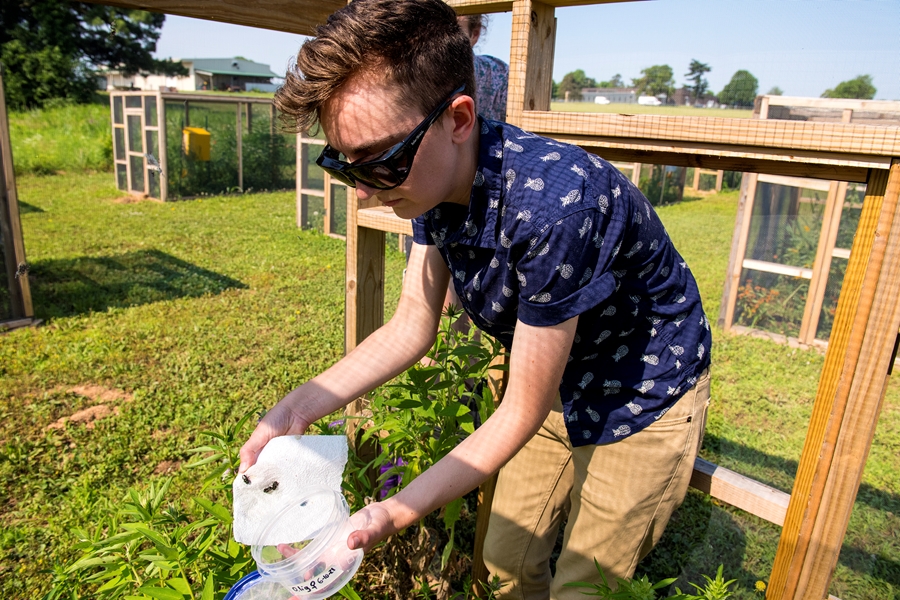 Many wild bee populations are decreasing. But Olivia Kline, an entomology Ph.D. student at the U of A, is investigating a way Arkansas farmers can give the bees a boost.

Kline, a graduate student in Dale Bumpers College of Agricultural, Food and Life Sciences, works in the research program of Neelendra Joshi, associate professor of entomology for the Arkansas Agricultural Experiment Station, the research arm of the U of A System Division of Agriculture. He specializes in research on pollinator health, fruit entomology, integrated pest management and pesticide toxicology.

Their research focuses on blue orchard bees, a type of mason bee that is native to Arkansas and many other areas of the U.S. Joshi said they are easy to identify because of their iridescent blue color. They nest in tunnels left behind by other insects, like the galleries carved out of trees and wood structures by boring beetles.

Joshi said the characteristic feature of mason bees is that the females use mud to build chambers in the tunnels and lay one egg in each chamber. They lay eggs containing female bees in the deepest chambers and males in the chambers closest to the entrance.

"The males emerge first," Joshi said. "Then they hang around waiting for the females to emerge so they can mate with them."

Like many bee species, Joshi said, the males have only that one job. The females collect pollen and nectar, which they roll into balls of food for the emerging larvae and place them in the chambers where they lay the eggs.

"They are gregarious," Joshi said.

Kline said the bees are not aggressive toward people and the males couldn't sting if they wanted to — no stinger. That makes them ideal research subjects when the researcher is going to spend a lot of time observing them.

Joshi said blue orchard bees are native pollinators and valuable to many fruit crops, including tree fruits, hence their name.

Several factors, often interacting, have been implicated in the decline of wild bee populations like blue orchard bees, Kline said. "Increased pesticide use in both rural and urban settings, climate change and pathogens contribute to bee declines," she said. "But habitat loss remains one of the primary drivers."

Kline and Joshi realized many farms have available land — along fence lines, around barns, chicken houses and other buildings — where native plants could grow without taking crop land or pasture out of production.

Kline said the aim of her research is to investigate whether the addition of native floral resources in an area can help support native bee species while improving the nutrient quality of the soil.

"A significant improvement in soil health could be an added benefit, and perhaps an inducement, for farmers who opt to add wildflowers to their land to support bee populations," Joshi said.

In a field on the Division of Agriculture's Milo J. Shult Agricultural Research and Extension Center in Fayetteville, Kline has erected 12 bee habitats — wood-framed structures covered in black netting — to serve as test plots.

"Olivia's dad built the habitats with help from Virgil Piazza," Joshi said. Piazza is a maintenance supervisor at the center.

Kline smiles. "He's been a woodworker for years."

Four of the plots have a buckwheat monoculture, Kline said. Four have a wildflower mix targeted for honeybees and the remaining four contain a wildflower mix aimed more generally at pollinators of all species.

Into each habitat, Kline placed 20 female and 10 male blue orchard bees. Later, she raised the population count to 30 and 15, respectively. The habitats also contain wooden blocks with holes drilled to serve as nesting sites. The blocks come apart so that the scientists can observe the nesting sites to see whether the bees are mating, collecting and storing food and laying eggs.

The research will continue through the summer before evaluating the results, Kline said, but a couple things are becoming apparent.

For example, although honeybees can thrive on buckwheat, the blue orchard bees are not doing well in the habitat planted with only that one species.

The bees will be evaluated for fitness by measuring offspring body weight, larval development time and adult emergence from the nests. The soils in the habitats will be analyzed for nutrient content and microbial communities.

Kline will conduct comparative analyses to reveal whether the native flower mixes had a positive effect on soil quality as well as bee development when compared to the monoculture control habitats.

For her native bee health research, Kline received a graduate student grant from the U.S. Department of Agriculture Sustainable Agriculture Research and Education Program, Joshi said. "This is quite a competitive grant," he said. "Olivia was one of only three recipients from the southern region in the entomology category."

Kline also received a Doctoral Academy Fellowship from the U of A, Joshi said.

Joshi said, "Wild bees are key players among pollinating insects and contribute greatly to American agriculture by pollinating for fruit and vegetable crops. Maintaining healthy pollinator populations is essential for agriculture in Arkansas and elsewhere."

"The addition of natural habitat and native flowers to a crop system can provide benefits to sustainable agriculture that greatly outweigh the costs," Kline said. "This study investigates the direct benefits that floral diversity can have on pollinators, soil and agriculture as a whole."