Citizen Scientists: Advancing Research Together From Backyards to Labs 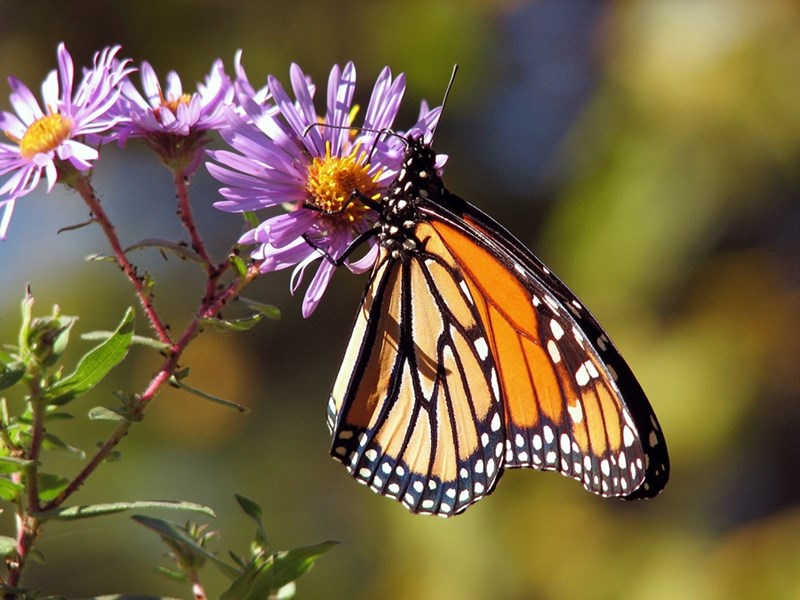 “We are born scientists. We ask: How? Why?” said Erica Westerman, assistant professor of biological sciences at the U of A. She believes in this natural human curiosity so strongly that she invites people of all ages and backgrounds to participate in the Northwest Arkansas Citizen Science Butterfly Project.

The word “citizen” in this case doesn’t refer to a birth certificate or a passport. Anyone can become a citizen scientist. As experts in fields ranging from astronomy to medicine discover the value of public participation in their work, the demand for citizen scientists is growing.

Westerman studies the relationship between a butterfly’s color and how it behaves around plants of particular colors. She can make predictions based on butterflies she has watched. But with more data — more observations of butterflies in action — she has more confidence that her predictions are correct. And since 2016, she’s partnered with the Botanical Garden of the Ozarks to recruit volunteers to watch butterflies and use a simple form to report what they see.

Roslyn Imrie, director of education and community at the botanical garden, welcomes this partnership because one of the garden’s attractions is the butterfly house, somewhat like an open-air aquarium where visitors can step into the butterflies’ own world. In addition, the botanical garden aims to serve the whole community, with wheelchair-accessible paths, English-Spanish signs and programs for schoolchildren and seniors. “[The Botanical Garden of the Ozarks] is for everybody — and everybody loves butterflies!” Imrie said.

Volunteers who participate in the Butterfly Project have fun while learning about the natural world and how science works. They also have the satisfaction of knowing that they’re contributing to scientific research. When U of A faculty and students watch butterflies, their observations line up with the volunteers’ reports, demonstrating that these citizen scientists do their job well. With all this data, Westerman can advise gardeners what plants to grow in order to lure certain species of butterflies.

PROTECTING US FROM PESTS

Butterflies inspire delight and wonder; ticks trigger the opposite emotions. These anti-tick feelings may be the reason so many citizen scientists joined the Arkansas Tickborne Disease Project — they want to fight the pests that might make them sick.

Ashley P.G. Dowling, professor of entomology and plant pathology at the U of A, set out to discover which tick species live in this state, which species carry which diseases and what percentage of ticks are infected. He started this project in 2016, but realizing that his research team couldn’t cover the whole state, he began recruiting citizen scientists. The Arkansas Biosciences Institute and the Arkansas Department of Health provided funds, and the U of A Cooperative Extension Service helped to distribute tick-collection kits.

The kit contained small tubes with color-coded labels and a color-coded greeting card-sized form. Citizen scientists sealed a tick in a tube, matched the label to the line with the same color on the form and filled in the GPS coordinates where the tick was found. It was that simple to provide good data.

“People are surprisingly good at recognizing ticks,” Dowling said. Only a few participants sent other crawly creatures by mistake.

Arkansans sent in more than 12,000 ticks, so many that Dowling couldn’t keep up. He called a halt to collecting in order to give his team time to identify the ticks and screen them for diseases. After he processes all the samples, he plans to share the results with researchers, health agencies and the broader community.

Like ticks, the creatures that J. D. Willson studies are good at hiding. An associate professor of biological sciences at the U of A, Willson specializes in herpetology, the study of reptiles like snakes and turtles, and amphibians such as frogs and salamanders. These animals blend in and stay quiet, making them hard to see. Only outdoor people who spend time in local natural areas know how to spot them.

How does Willson connect with these outdoor people? He uses iNaturalist, a website where volunteers all over the world post information directly from their cell phones about the plants and animals they observe. For Willson, iNaturalist is a multi-purpose tool. He uses it to find data that show whether or not a species is spreading beyond its usual territory so he can plan his research. He uses it as a notebook to record his own observations. And, equally important, he uses it to share those observations.

Early this year, Willson asked students to record their nature notes on iNaturalist rather than in a journal. This turned out to be a smart decision. When the pandemic arrived and U of A classes went online, students could continue to share their notes not only with Willson and one another, but also with the experts and citizen scientists working together in the iNaturalist community.

Would you like to become a citizen scientist? If you like reptiles and amphibians, you can participate in Willson’s project on iNaturalist’s U of A Herpetology page.  “Just jump in,” Willson invited, but he adds a warning: citizen science can be “almost addictive.”

Prefer butterflies? Check out the “at-home” version of the NWA Citizen Science Butterfly Project, which is now available on the botanical garden’s website. Westerman also recommends Project Monarch Health. You don’t need any special training or equipment. You don’t even need to be an outdoor person. As Westerman said, “All you need is a window.”

Maybe none of these projects appeal to you, but you want to learn how you can contribute to research. SciStarter hosts a directory of projects — inside or outside, ranging from brain diseases to spider webs to water purity. The first step toward becoming a citizen scientist, Dowling advised, is choosing a project that “excites you.” Whatever your interests, you have plenty of choices. You, too, can help move science forward.