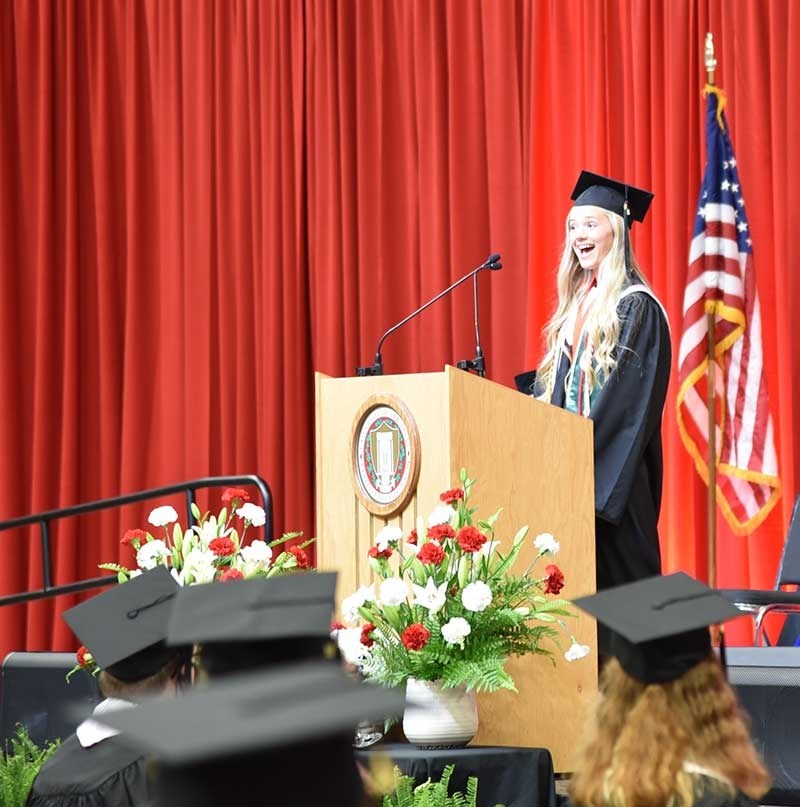 Members of the College of Engineering gathered virtually April 28 to honor the college's top students.

Every year, a graduating senior is named as the College Outstanding Senior. This person is truly an example of the values of the College of Engineering. The student has excelled academically and has taken advantage of other opportunities, such as internships and design projects, which allowed them to learn new skills and develop as an engineer.

Madeline Suellentrop, a senior industrial engineering major, was named the College of Engineering 2021 Outstanding Senior. Suellentrop spoke at the college's commencement ceremony May 7.

The college recognized 21 First-Ranked Senior Scholars who received a 4.0 grade point average on all coursework completed at the U of A:

Thirteen students were honored as U of A senior scholars, who received a 4.0 grade point average on all course work, including some transfer work:

The College of Engineering recognized six students with the Porter Stone Co-op Award, which recognizes excellence in cooperative education. Recipients were:

Several graduate students were recognized based on their high level of past achievements and future potential. The Distinguished Doctoral Fellowship recipients for fall 2020 to fall 2021 were:

The Doctoral Academy Fellowships recipients for fall 2020 - fall 2021 were:

Coleman Warren, a junior industrial engineering major, was selected as a 2021 Harry S. Truman Scholarship recipient. The Truman Scholarship is given to students based on their leadership, academic achievement and dedication to a career in public service. Warren was chosen from among 845 applicants from 328 institutions.

Each year the university recognizes one student in each undergraduate school and college, and one law student, as Presidential Scholars. Dominique Savage, a chemical engineering major, was named as a 2021 Presidential Scholar in the College of Engineering. This program was established in recognition of James E. Martin, former president of the U of A. Each Presidential Scholar is recognized from among upper-class students on the basis of grade-point average and receives an award of $1,000.

Finally, the First-Year Engineering Program (FEP) celebrated Gianna Busch and Anshuman Nandy. Busch was awarded the Peer Mentor of the Year award to honor and celebrate the outstanding efforts of a mentor. Nandy was named Freshman of the Year for his persistence in his education and professional life, as well as showing a desire to give back to his fellow students in the area of mentorship, leadership development and social awareness.