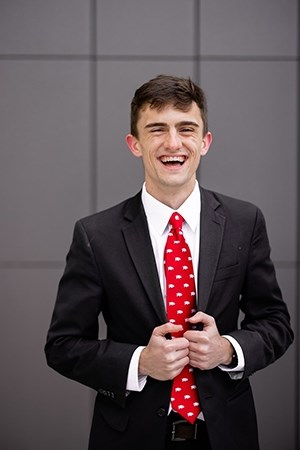 U of A Associated Student Government President-elect Coleman Warren has been selected as a 2021 Harry S. Truman Scholar.

As an Arkansas Governor’s Distinguished Scholar and a U of A Chancellor’s Scholar, Coleman, a native of Farmington, is an honors junior pursuing two degrees — one in industrial engineering in the College of Engineering and one in political science in Fulbright College of Arts and Sciences. Throughout his academic career at the U of A, he has also been engaged actively in campus and in community service.

The 62 new Truman Scholars were selected from 845 candidates nominated by 328 colleges and universities — a record number of applicants, according to the Truman Foundation. They were selected based on the finalists’ academic success, leadership experiences and likelihood of becoming public service leaders.

Established by Congress in 1975 as the living memorial to Pres. Harry S. Truman and national monument to public service, the Truman Scholarship is intended to inspire the next generation of public service leaders.  It provides $30,000 for graduate school as well as a lifetime network with other Truman Scholars, past and present.

Warren plans to use his $30,000 Truman scholarship to pursue a master’s degree in public policy at the University of Chicago or another competitive institution.

“The Truman Scholarship is an amazing opportunity,” Warren said. “If I attend the University of Chicago as I am planning now, I hope to study with faculty like Prof. Susan Mayer, who has written prolifically about measuring poverty, the effect of children’s upbringing in poor neighborhoods and the effect of parental income on a child’s well-being. I also hope to intern with an organization like the Greater Chicago Food Depository, the major food bank in Chicago that coordinates over 700 food pantries, soup kitchens and other programs in the area. I am also looking forward to networking with other Truman Scholars who are interested in food insecurity issues.”

“Coleman Warren is a force for positive change,” said Chancellor Joe Steinmetz. “I know this first hand, having taught him in class and having worked with him through ASG and in various other ways. I understand fully why the Harry S. Truman Scholarship Foundation selected him as 2021 Truman Scholar. He has already been an agent for change, creating his own business to generate revenue for a non-profit he also created that helps provide meals to those in our community who need them. He has big plans for the campus now as ASG president and for the state where in the not-too-distant future he will run for state office. Congratulations to him. I think we will be reading about his accomplishments for years to come.”

One of Warren’s main concerns is addressing hunger and food insecurity issues in Arkansas. Because of his interest in food insecurity, he served as an AmeriCorps VISTA Summer Associate at the Food Bank for the Heartland in Omaha, Nebraska, working with Craig Howell, director of community partnerships.

“In the summer of 2019, Mr. Warren quickly became the leader of the VISTA team,” Howell reported. “He showed strong relationship skills with an ability to have peers follow him as a result of his energy, personality and ability to get things done. That team in the summer of 2019 was simply the best Kids Cruisin’ Kitchen team in the history of the program, which spans over 10 years. With the team leadership of Mr. Warren, over 30,000 children received regular nutritious summer meals across the communities experiencing food insecurity.”

During his time in Nebraska, Warren was able to create a high-quality, small-batch, artisan ice cream business that served as an economic engine for charitable causes. He was able to bring this concept to Northwest Arkansas after working with Neil McWilliams, the owner of The Spring Dipper in Mammoth Spring to learn the basics of making ice cream commercially.

“Coleman is a very energetic, very original and very innovative individual,” McWilliams said. “He’s doing things that no one would really try to do at that age.”

Warren worked with the Farmington School District to lease an unused kitchen facility that would serve as production headquarters and sought approval from the superintendent and the school board before having the land surveyed (working with civil engineering firm), and appealing its land use before the city planning commission.

Now that his business is operational, Warren makes each batch of ice cream himself and oversees all aspects of the business, including marketing, delivery and finances. To date, he has used the profits of his company, Simple + Sweet, to provide over 12,500 meals to hungry children in Northwest Arkansas through donations to local organizations. Having recently received $15,000 in seed funding through the Governor’s Cup competition, Warren has plans to open a food truck this summer.

“Coleman will thrive in graduate school,” said Todd Shields, dean of Fulbright College of Arts and Sciences. “The fact that he is pursuing two honors degrees, one in engineering and the other in arts and sciences, points to his ability to make the most of a competitive academic environment. He will benefit greatly from the Truman Scholar community, networking with talented people across the country to glean from them how he can best serve our state and the issues that he wants to address. Coleman has been a great representative of our university, and I have no doubt that the Truman Scholarship program will be just as proud of his accomplishments in the years to come as we are.”

On campus, through his work with the Volunteer Action Center, Warren has found creative ways to use his engineering training to increase the organization’s volunteer productivity.

When students volunteer, they can log their hours through a program called GivePulse, which allows them to keep a record of their activity. Warren helped create a way to automate the process of analyzing student data, which allows the Volunteer Action Center to see which groups are volunteering more or less than the campus average. With this data, he is able to reach out to groups with high levels of engagement to see if there are any strategies that the center can promote to increase service overall.

“Coleman has dreams and goals to serve our community and state on a bigger stage; he aspires to run for office one day,” said Angela Oxford, director of the Volunteer Action Center. “I believe he has the makings of an excellent public servant, and I can see him one day tackling big issues and working alongside people to create solutions to those issues. If our newest Truman Scholar’s current endeavors like Simple + Sweet Creamery are any indication of his future potential to solve bigger problems and develop workable solutions through public service, I believe we are in good hands.”

Warren, a native of Northwest Arkansas, grew up in Farmington with his parents Travis and Cassie Warren and three siblings. Throughout his life, he has frequently traveled to Tilly — a small community in the eastern Ozark Mountains — to visit his grandparents D.L. and Arlis Warren. He traces his roots seven generations deep in Arkansas, from his four-great grandparents who settled in Arkansas from Ohio.

D.L. and Arlis Warren often traveled each summer to the West Coast to do seasonal work on farms. When at home in Arkansas, they spent time building their home in Tilly stone by stone. Warren mentioned in his application for the Truman Scholarship that part of what drives him comes directly from this family history.

U of A students who are interested in applying for the Truman Scholarship should contact the Office of Nationally Competitive Awards at awards@uark.edu.