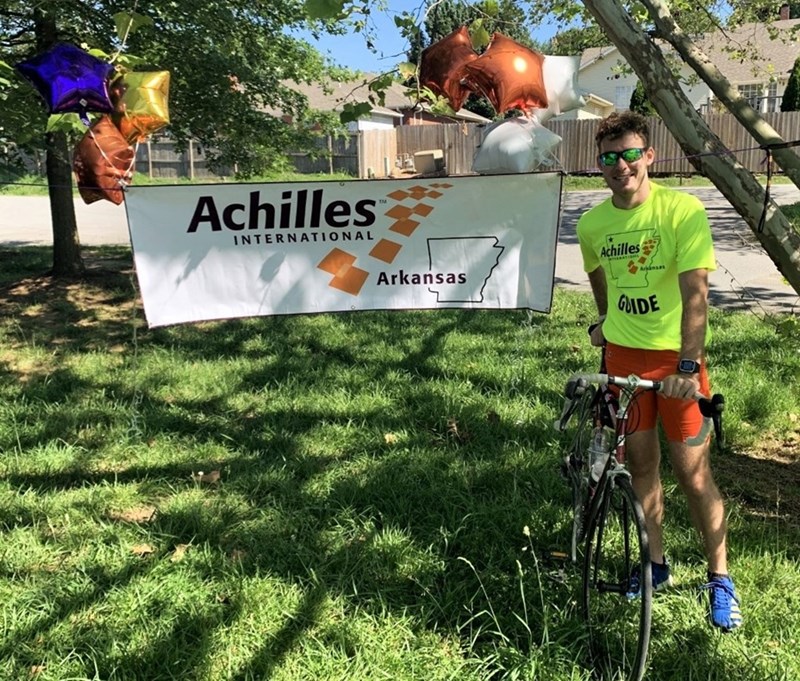 Benjamin Wright at a charity bike ride for the Arkansas chapter of Achilles International.

U of A student Benjamin Wright grew up hearing about his "eventful" birth, which led to delayed development and, by kindergarten, speech-language therapy services that continued throughout elementary school.

Midway through his freshman year of college, Wright rediscovered the field after his grandmother experienced a stroke and needed help regaining her speech. He soon changed his anthropology major to Communication Sciences and Disorders in the U of A College of Education and Health Professions.

He plans to work with adults who have neurogenic communication disorders and swallowing issues.

"I realized that speech-language pathology would be perfect for combining my passions and personal history," he said. "Life has a way of coming full circle."

Wright has been an exemplary student who's also active outside the classroom. He's the volunteer coordinator for the U of A National Student Speech Language Hearing Association chapter and represents the state as an officer in the national organization.

He's also a volunteer with the Arkansas chapter of Achilles International, an organization that promotes inclusivity for people with disabilities through athletic programs and social connections. Wright helps guide athletes with disabilities, literally running alongside them for safety and to assist with any special equipment they might use.

"I wanted to share my joy of running and biking with others," he said.

For the chapter's first anniversary in May 2020, he organized a 100-kilometer charity bike ride through Northwest Arkansas. Each kilometer was sponsored by community members and the fundraiser netted $780 in the 48 hours before the anniversary date. Proceeds went toward the purchase of a specialized four-wheeled handcycle for one of the chapter's athletes who has cerebral palsy.

In 2020, Wright was awarded a U of A Honors College Team Grant to assist with his thesis research. He received a Student Undergraduate Research Fellowship (SURF) grant this spring for continued study.

His thesis focuses on personal and social identity shifts among people diagnosed with early onset dementia, which occurs before age 65.

"The goal is to provide insight about the triangulation of progressive loss of personal identity, stages of dementia and quality of life," he said.

The findings may help with quality of life treatment goals over the course of a dementia patient's life, he said. Wright expressed gratitude to professors Fran Hagstrom and Mohammad Haghighi for their guidance and mentorship. He also acknowledged Jennie Popp, associate dean at the Honors College, for her insight and feedback on his research.

Wright will graduate next month from the communication sciences and disorders program and will pursue a master's degree in speech-language pathology this fall.

This story is the latest in a series called the Dean's Spotlight, featuring outstanding students in the College of Education and Health Professions. Visit COEHP's online magazine, the Colleague, for more news from the six units that make up the College. Visit the Communication Sciences and Disorders page for more information on COEHP's speech-language pathology program.