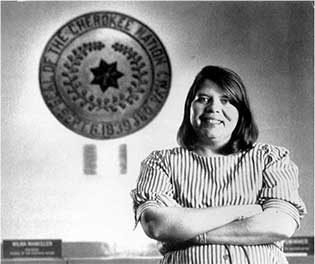 Wilma Mankiller, who studied community development at the U of A School of Law, was the first woman elected chief of the Cherokee Nation, seen here in front of the Cherokee tribal seal in Oklahoma on July 19, 1985.

Wilma Mankiller (1945-2010) credits her family's move from rural Oklahoma to the Bay Area as her political awakening where she participated in protests alongside other Native Americans during the 19 month-long Occupation of Alcatraz.

She returned to Oklahoma with her young daughters and worked tirelessly revolutionizing community development projects. In 1987 she became the first elected female principal chief of the modern Cherokee Nation. President Clinton bestowed the Medal of Freedom on Mankiller in 1998.

Read more about Wilma Mankiller in the Smithsonian Magazine »

— Sponsored by the Chancellor's Commission on Women