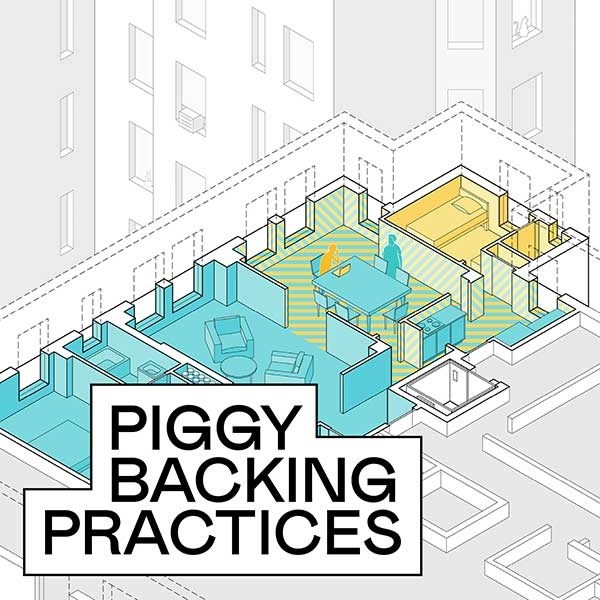 FAYETTEVILLE, Ark. – The Fay Jones School of Architecture and Design will host the virtual event “Piggybacking Practices: A Symposium on Architecture and Inequality” on March 15 and 22, via Zoom.

This virtual symposium will bring together several of North America’s most innovative architects, urban designers and scholars for a two-part conversation exploring “piggybacking practices” in relation to contemporary forms of inequality in the built environment.

Brian Holland, an assistant professor of architecture in the Fay Jones School, organized the symposium, which is planned for two consecutive Mondays in March. Sessions will take place from 4-6 p.m. each day.

Register for this symposium by completing the form on Zoom.

The symposium is motivated by Holland’s belief that there is an important role for planners, architects and designers to play in uncovering latent sites and situations for piggybacking, and in developing tactics and sensibilities in support of this work.

“As it becomes increasingly apparent that all forms of urban centers are struggling to determine what will emerge from our current socio-economic circumstance, this symposium and exhibition are supremely relevant — to practitioners, developers, end-users, and our own Fay Jones School of Architecture and Design students emerging into a newly forged post-pandemic world,” said John Folan, head of the Department of Architecture. “Assistant professor Holland’s research, which was initiated during the last global economic shift, has since evolved and provides a unique lens through which to understand how societies and the built environments they represent have adapted, and will need to continue adapting. The ‘Piggybacking Practices’ virtual exhibition provides a number of exquisitely illustrated case studies as a provocation for a rich symposium that will certainly help leading urban strategists and thinkers speculate about more just urban futures.”

Holland, who began researching these practices during the past decade’s recession, said that piggybacking is often born of necessity.

“Piggybacking practices are emerg­ing in response to the intensifying pressures of contemporary market logics, and alongside widespread increases in social and economic inequality,” Holland said. “Lacking the necessary capital to build in a traditional manner, would-be piggybackers scan the urban landscape looking for opportunities in vacancy, waste, and unexploited or underexploited niches. Potential opportunities may be spatial, existing in, on or in-between buildings and sites. But they may also be temporal, existing within the daily, weekly, seasonal, or onetime gaps between use and non-use.”

In leveraging these opportunities, Holland explains that piggybacking practices assemble disparate actors together into new forms of collaboration.

“In some sense, piggybacking can be seen as an unconventional spin on more traditional mixed-use programming, albeit one not typically planned for or designed by professionals, since its practitioners often lack the social, political or economic capital necessary for more strategic forms of planning,” Holland said.

The symposium will feature presentations and discussions with an array of innovative architects, urban designers and scholars who have used piggybacking practices in their projects and research.

The goal of the symposium is to evaluate the opportunities and limitations of piggybacking practices in incrementally expanding equity, opportunity and sustainability in the built environment. A digital exhibition of piggybacking case study drawings, created by Holland and a small team of undergraduate students in the Fay Jones School, will accompany the symposium.

“Part of what I’m trying to do with this research is to help visualize and describe these practices and ask what role they might play in mitigating some of the persistent inequities in our urban spaces,” Holland said.

The March 15 session on “Tactics and Strategies” will examine common piggybacking tactics such as niche inhabitation, resource sharing, and waste stream capture, and ask how these tactics can be leveraged in support of larger strategic aims. Mason White and Lola Sheppard of Lateral Office, based in Toronto, Canada, will moderate the session. Panelists will include Clare Lyster of Clare Lyster Urbanism and Architecture, in Chicago, Illinois; Dan Adams and Marie Law Adams of Landing Studio, in Somerville, Massachusetts; and Jaffer Kolb and Ivi Diamantopoulou of New Affiliates, in New York, New York.

On March 22, the symposium will continue with the session titled “Ethics and Sensibilities.” This session will explore the emancipatory potentials of piggybacking practices in relation to the wider discourse around advocacy and activism in architecture and urban design. Dana Cuff of cityLAB UCLA, in Los Angeles, California, will moderate the session. Panelists will include Georgeen Theodore of Interboro, in Brooklyn, New York; Joyce Hwang of Ants of the Prairie, in Buffalo, New York; and Teddy Cruz and Fonna Forman of Estudio Teddy Cruz + Fonna Forman, in San Diego, California. Cruz and Forman are also the John G. Williams Distinguished Visiting Professors in Architecture this semester in the Fay Jones School.

“As practitioners and researchers, each of these participants has developed important and innovative projects that strategically leverage piggybacking tactics to expand architecture’s ability to act on and in the interstices of the contemporary urban landscape,” Holland said. “I’m thrilled to be assembling such an inspiring array of design and thought leaders for this event, and I want to thank the leadership at the Fay Jones School for their ongoing support of this work.”

This symposium is part of the Fay Jones School’s spring lecture series, which is presented in collaboration with Places Journal, an internationally respected online journal of architecture, landscape architecture and urbanism, and the University of Arkansas Division of Diversity, Equity and Inclusion. The series is also made possible in part by a gift from Ken and Liz Allen of Fayetteville, part of an overall set of commitments the Allens have made to the school’s programs and initiatives in diversity, equity and inclusion.

More details about the symposium and bios of the participants can be found on the Fay Jones School website.