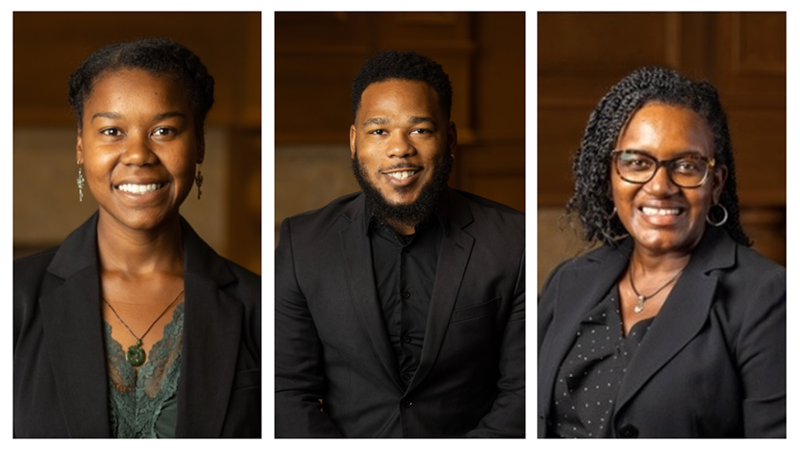 The Graduate School and International Education is hosting a virtual celebration of Peace Corps Day at 3:30 p.m. Thursday, March 4, through Zoom.

The event will consist of a panel discussion with a selected number of Returned Peace Corps Volunteers (RPCVs) from the Clinton School of Public Service about the challenges and rewards of serving in the Peace Corps, with a focus on the topic of diversity and inclusion.

The discussion will be informative to anyone who is interested in joining the Peace Corps after graduation, or anyone interested in global aid work and service. UA students will also have an opportunity to engage with RPCV's with questions at the end of the panel discussion.

The panelists are Tim Campbell, Lydia Grate, and Felicia Kennedy, and the panel discussion will be moderated by Peace Corps recruiter, Corbin Johns.

Tim Campbell grew up in the inner city of Little Rock, Arkansas, and graduated from Central High School in 2010. Campbell attended UAPB, where he studied health and wellness, graduating in 2015 as the first member of his family to receive a college degree.  Upon graduation, he was successfully accepted into the U.S. Peace Corps Program, where he served as a Community Health Facilitator in The Gambia from 2016-2018. Campbell also served as Chair of Peace Corp The Gambia's Diversity Board. Following his two-year tenure with the Peace Corps, Campbell spent a six-month practicum with the Office of International Programs and Studies at UAPB, where he served as a Senior Adviser to UAPB's Peace Corps Prep Program.  Campbell is a second-year student at the Clinton School of Public Service, where he serves as SGA President.

Lydia Grate is a graduate student at the Clinton School of Public Service. She has earned degrees from Arkansas Tech University in broadcast journalism, public relations, and speech communication. She served as a Peace Corps Volunteer in Togo, West Africa from 2011-2013. During her service, she facilitated training (in French) and collaborated with local NGOs and the U.S. Embassy to organize conferences for youth and women's empowerment. Grate has worked in six countries and on a variety of public service projects, including teaching hospitality skills to girls at risk of sex trafficking in Thailand, mentoring at-risk youth in Australia, and organizing community festivals in New Zealand.

Felicia Kennedy is from Portland, Arkansas, and graduated from the University of Arkansas at Pine Bluff with a degree in computer science. She served as a Peace Corps English education volunteer in the Republic of Georgia from 2018-2020 and was a founding board member and vice president of the board for Visions Academy Charter School of Newark, N.J. Her public service interests include young adult leadership development, career achievement, and community involvement.

Register to receive the event's meeting link via e-mail.