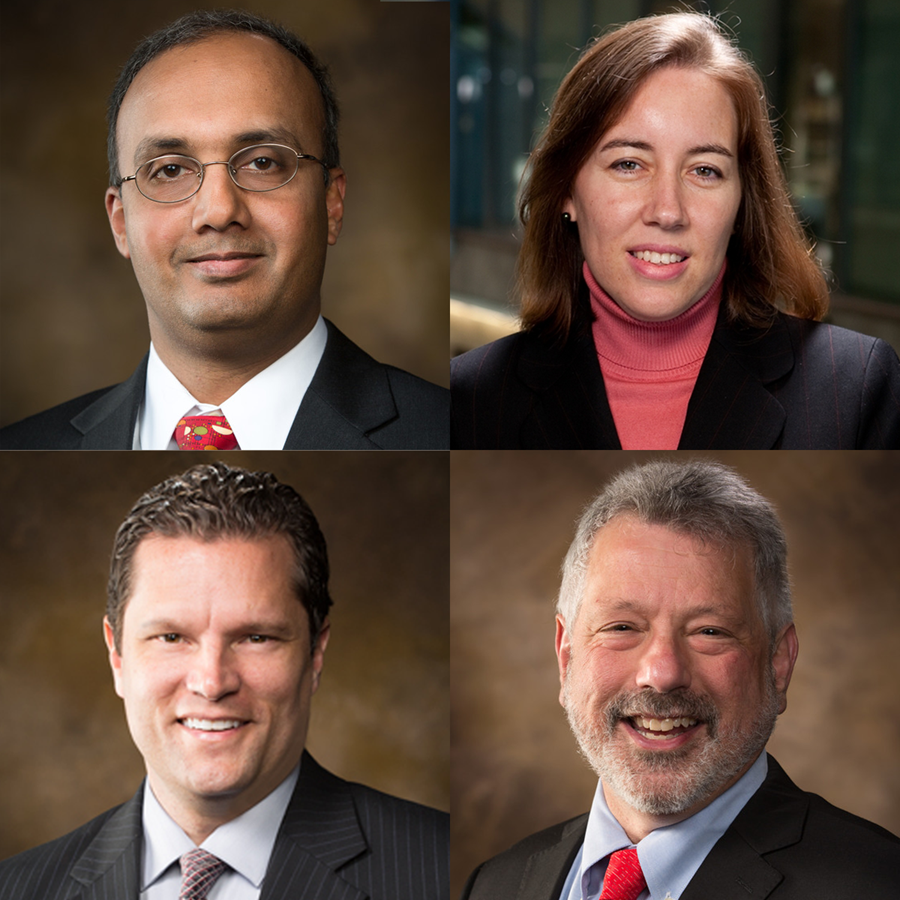 FAYETTEVILLE, Ark. – Three University of Arkansas employees were honored by the American Red Cross for their quick thinking to save the life of a fellow U of A employee.

Mark Power, vice chancellor for university advancement; Raj Rao, professor and head of the Department of Biomedical Engineering; and then-Provost Jim Coleman were honored during a virtual ceremony on Feb. 12 for their actions to save the life of Heather Nachtmann, senior associate vice chancellor for research and innovation and professor of industrial engineering.

Nachtmann collapsed after suffering a heart attack during a meeting in October 2019, prompting Coleman, Power and Rao to spring into action to perform CPR and call for medical help.

Shawna Price, board chair of the Northwest Arkansas Chapter of the American Red Cross, praised the group’s heroism.

“Emergencies can happen at any time,” Price said. “Regardless of when and where they occur, there’s usually one thing in common. It’s a crowd of people staring at the victim, wondering who should act and trying to remember what to do in that moment of stress and pressure – until a hero emerges from that crowd.”

Coleman and Power were honored with the American Red Cross Certificate of Extraordinary Personal Action, which recognizes individuals who fulfill the organization’s mission by saving or sustaining a life.

Power was recognized for his life-saving work in performing chest compressions, while Coleman was honored for his role in calling emergency responders and communicating with dispatchers as the situation unfolded. Coleman also monitored Nachtmann’s pulse, guiding Rao’s and Power’s efforts, until officers of the U of A Police Department arrived.

Rao, Power and Coleman each said the day would be forever etched in their memories, and all said they were thankful to have acted quickly to save the life of a treasured colleague. Coleman said he will never forget, “The joy of feeling her pulse emerge again out of the silence and darkness and stay stable.”

Nachtmann said she is thankful each day for the group’s compassion and quick action.

“I am so grateful for the quick and heroic actions of Raj, Mark, and Jim and Patrol Officers Megan Bryant, Paul Edwards and Tara Wilder of UAPD. My family, friends, and I think about each of them and Dr. Joel Carver and his team at the Walker Heart Institute more than they will ever know,” she said. “Not only did these heroes save my life, their quick actions protected my heart from functional damage so I have an excellent prognosis.”

Nachtmann encouraged others to invest time in learning life-saving skills.

“I hope every woman reading this will familiarize herself with women’s heart attack symptoms,” she said. “An understanding of these specific but often mild symptoms can help save your life. And of course, I encourage everyone to get trained in CPR. You never know when you may be called upon to save a life.”

Classes and more information can be found at redcross.org/takeaclass.