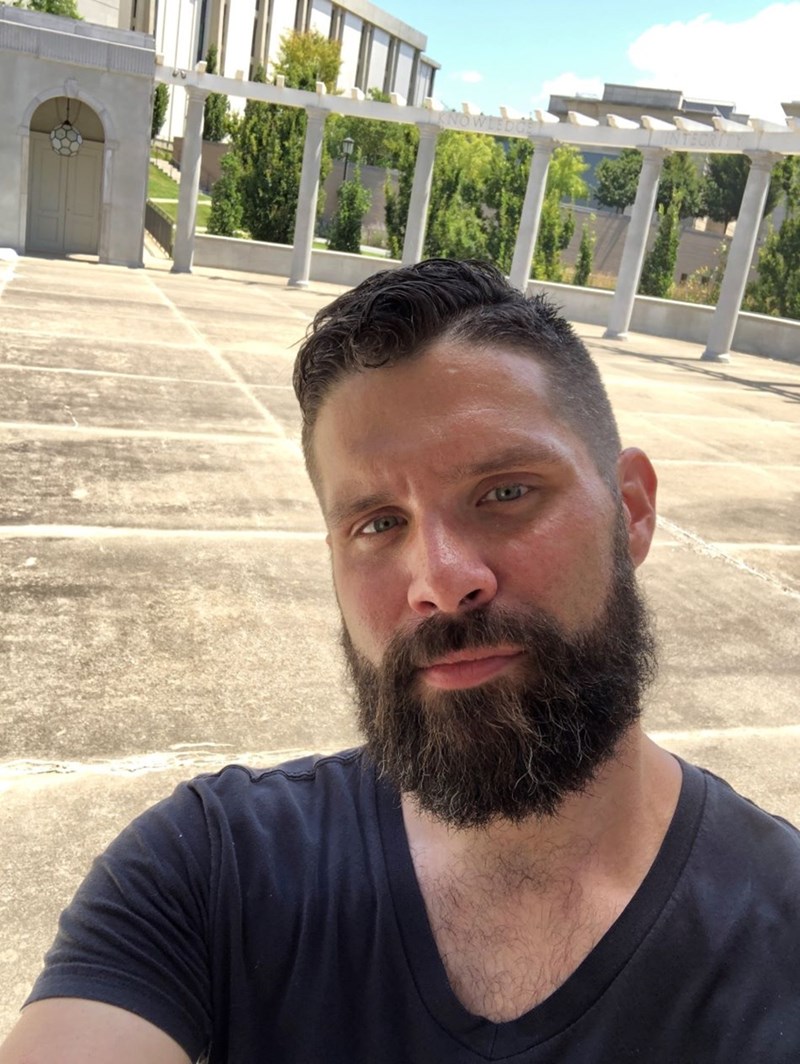 Micah Wylie on the U of A campus.

After 13 years in Los Angeles, Micah Wylie wanted to reinvent his life.

Originally from Tulsa, Oklahoma, he lived in Chicago, New York City and Denver before landing in L.A. Wylie had earned a bachelor's degree in speech communication from Northwestern University in 2002, and then he studied speech, voice and performance while working in the entertainment and fitness industries.

"After learning so much about speech from an artistic perspective," Wylie thought, "Why not learn about it from a scientific perspective?"

As Wylie considered his options, he reunited with an old friend who had recently been diagnosed with aphasia. She'd survived a brain aneurysm and had trouble speaking, reading and writing.

"While I was visiting her in London, she told me the story of her journey with aphasia," he said. "Then I picked up a copy of her book, and her story captivated my imagination. As I read, I began to realize the many possibilities of a career as a speech-language pathologist."

Wylie left L.A. and moved in with family. He discovered the University of Arkansas, made a detailed plan with an adviser, and eventually he was able to quit his job and return to college full time.

Wylie is now in his first year as a master's student in the College of Education and Health Professions' Communication Sciences and Disorders program. He's also a graduate assistant in the program, helping professors with administrative and creative tasks. He started thesis research this semester and is conducting an exploratory study to learn about the life experiences of transmasculine individuals.

"My purpose is to learn about the self-perception of vocal function in different situations and how voice and communication relate to gender expression," he said. "I am excited to be learning about an often-overlooked population."

Wylie is intrigued by the variety of possibilities in the field of Speech-Language Pathology, including voice disorders, autism and aphasia.

"I would also love to work in voice disorders, vocal habilitation and gender-affirming voice and communication therapy," he said. "There is so much to learn and I'm excited to see where the journey takes me over the next couple of years."

Wylie will draw on his experience of working with people from all walks of life. While in L.A., he worked at Peace Arch Entertainment, which produced the Showtime series The Tudors. He also joined forces with former Northwestern classmates to produce an assortment of socially relevant plays with their company needtheater.

"The company sought to bridge diverse communities in Los Angeles by producing theater that spoke to life, cultivated social dialogue and expanded the role of theater in society," he said.

Life is quieter — and more peaceful, he adds — in Arkansas. But his goals remain lofty and people-oriented.

The former marathoner and certified classical Pilates teacher looks forward to helping people express themselves "in an effective, honest, authentic way, so that they may realize the power and magic that is inside them."

This story is the latest in a series called the Dean's Spotlight, featuring outstanding students in the College of Education and Health Professions. Visit COEHP's online magazine, the Colleague, for more news from the six units that make up the College. Visit the Communication Sciences and Disorders page for more information on COEHP's speech-language pathology program.