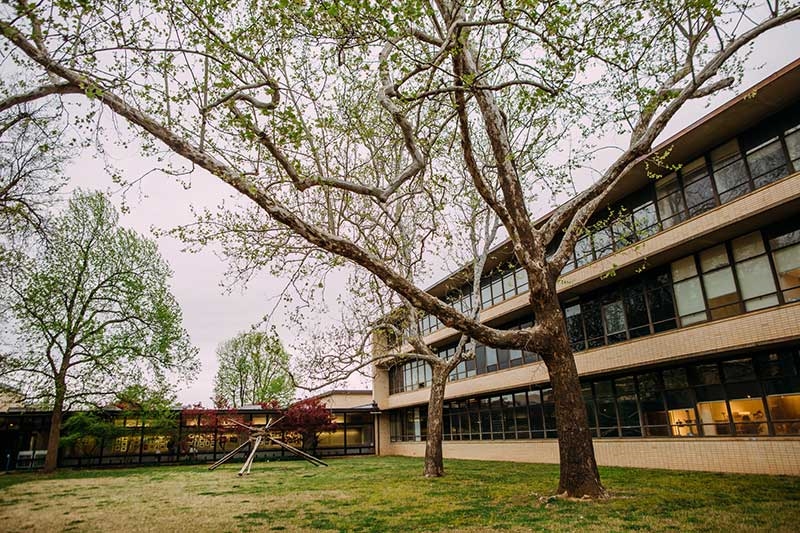 The Fine Arts Center, which houses the Department of Art and the School of Art as well as the University Theater and the Stella Boyle Smith Concert Hall.

The Fine Arts Center on campus, designed by the renowned architect Edward Durell Stone, was the first academic building in the nation to combine the arts within a single connected building, from theatre, dance and music to art and architecture.

Stone believed that connecting the arts within the same building would create opportunities for students in one discipline to find inspiration from interaction with students in other disciplines. A composer might be swayed by the work of a sculptor; a musician might draw thoughts from a theatrical production.

Don Schaefer, in his historical research of U of A buildings, wrote the following about the plans for a classroom building to house the programs of speech and dramatic arts, art, and music. The plans were started officially when the Board of Trustees agreed to ask the Arkansas General Assembly to fund the $1 million addition to the campus. In February of 1948 the board selected Stone, along with Haralson and Mott of Fort Smith, to design the fine and applied arts building. Stone, a native of Fayetteville who had attended the University of Arkansas, was a graduate of Harvard and on the architecture faculty at Yale University.

The Fine Arts Center was the first building on campus designed in the modern style of architecture with long straight lines eschewing ornament. The functionalist modernism style was a break from other architectural designs used in the past, and it allowed an economy of construction devoid of expensive design elements. Also new was a modular construction concept based on masonry dimensions that allowed for a better fit of windows and other building products. The design followed closely the needs of the four departments involved and was similar to other Edward Stone buildings of the mid-20th century. The new building used the same buff brick exterior as the nearby Fieldhouse, Razorback Hall, Davis Hall, and Gregson Hall. 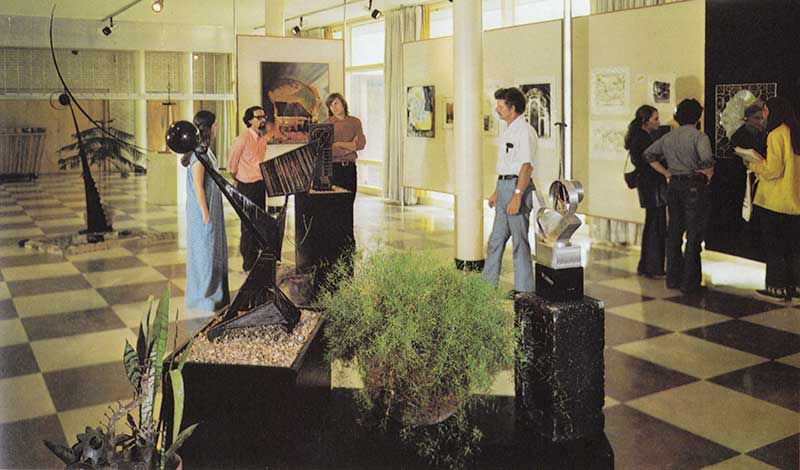 Faculty and students in the Fine Arts Gallery about 1975.

This structure is really three different buildings connected by a glass-walled lobby and gallery.

The largest of these buildings is a three-story classroom structure on the northeast, with art and architecture studios and drafting rooms on the first two levels and music studios and practice rooms on the third floor. A fine arts library was located on the west end of the first floor. Directly to the west is the concert hall, with pipe organ, for musical programs. The third building is the theater, located at the south end of the connecting gallery. This theater was said to have the greatest flexibility of stage and seating of any theater in the country, at the time it was designed. It was possible to have either a proscenium type theater, such as was used on Broadway, or an arena type, commonly known as a theater-in-the-round. There were five large platforms on rollers so that different sets could be moved on and off the stage without lengthy delays between scenes. A long covered walkway connected the gallery and lobby to an entrance on Garland. Also on the west side of the gallery was a small outdoor theater and a sculpture garden.

The departments moving into the new Fine Arts Center had been housed in older, cramped, and outdated facilities. Music had been in its own building on Maple Street, but it was an 1888 structure that had been built to house offices and laboratories of the Agricultural Experiment Station. Architecture had been located in Gibson Annex, but had just moved to a temporary building that they shared with chemical engineering north of the new Fine Arts Center. Speech and dramatic arts had been in Old Main where the stage and auditorium did not match even early 20th century facilities. Only the dramatic arts, now known as the Department of Theatre, moved to the new building. The art department had been located on the fourth floor of Old Main. 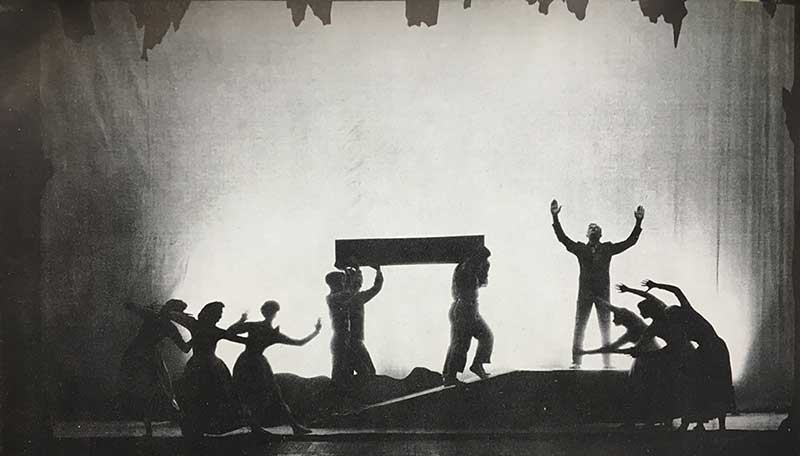 Actors rehears a scene from Acres of Sky, the first theatrical performance given in the Fine Arts Center.

Although the Fine Arts Center was not yet complete, art and music occupied their space in the new building in the fall of 1950. The incomplete center and theater were the scene Nov. 16 of an opening night production of Acres of Sky, written by alumnus Charles Morrow Wilson, by then an author living in New York City. The music was written by Arthur Kreutz with libretto by Zoe Lund Schiller. Photo from the Arkansas Alumnus magazine.Among those present was a photographer from Life magazine.

Musicians rehearse in the orchestra pit of the new University of Arkansas Theatre and under the direction of Marx Pales, assistant director of music for the first play produced in the theatre, “Acres of Sky,” written by Charles Morrow Wilson with music by Arthur Kreutz and libretto by Zoe Lund Schiller. Photo from the Arkansas Alumnus magazine.

A dedication of the music concert hall was held in early January of 1951 when a string quartet from the University of Illinois was in concert. A formal dedication took place in May of 1951 and was held in the Chi Omega Greek Theater. As a part of that three-day celebration, the Marriage of Figaro was performed in the new concert hall.

When Mullins Library was finished in 1968, the Department of Architecture, now known as the Fay Jones School of Architecture and Design, moved into the space the library vacated in Vol Walker Hall. When the Music Building was completed in 1978 and attached by a skywalk to the second story of the east end of the Fine Arts Center, this freed up even more space for the Art Department, known now as the School of Art. In the fall of 1980 the fine arts library almost doubled in size when 2,000 square feet of space was added.

The board, at its November 1991 meeting, authorized the development of plans to renovate the concert hall, gallery, and restrooms of the Fine Arts Center. Much of this work involved providing handicapped access and was completed in early 1993.

In November of 1995 the board approved further renovations of the Fine Arts Center that would replace the heating and cooling systems, remove asbestos, and make minor repairs. The estimated cost of $1 million would be funded by College Savings Bonds money. Goodman Engineers were selected to do the planning work for this in January, 1996. The plans were completed in February but the work was not done until the summer of 1997. The construction contract and the engineering design totaled $933,778.

In January of 2000 the university named the music concert hall in the Fine Arts Center the Stella Boyle Smith Concert Hall in honor of a donation of $500,000 to the Department of Music to establish an international music preservation program.

A 50th anniversary of the completion of the Fine Arts Center was celebrated in May of 2001. During this sesquicentennial year of the university, the center celebrates its 70th anniversary.