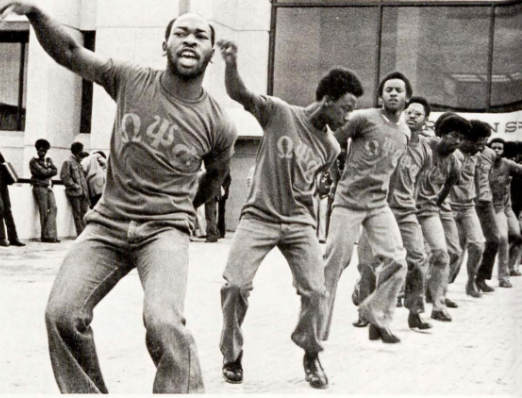 The tour will explore all aspects of life on campus, including joyous occasions such as the first Omega Psi Phi Step Show, captured on the Union Mall in 1975.

FAYETTEVILLE, Ark. – Silas Hunt Hall, Greek Row, Memorial Hall and the Chi Omega Greek Theater are among the campus landmarks that spark specific memories and reactions for Black students, alumni, faculty and staff. Ten honors students are commemorating African Americans’ experience of these sites and others by launching an online tour of campus.

The tour, titled “The Legacy of BAD Times: African American Student Experiences at the University of Arkansas,” is a product of the students’ final projects for the Fall 2020 Honors College Forum BAD Times, led by Charles Robinson, provost and professor of history.

Provost Robinson and his students also will lead a physical walking tour of campus at 3 p.m. on Wednesday, Feb. 24. Due to the University of Arkansas’ COVID regulations, physical participation in the tour is limited to under 100 people .To ensure your spot on the tour, please submit this registration form by the end of the day on Tuesday, February 23 and gather (masked) at 2:45 p.m. in front of Silas Hunt Hall.  The tour will also be streamed on Facebook Live @uarkhonors.

To honor Black History Month, throughout the month of February the Honors College will feature social media posts from students exploring various locations on campus that are significant to the African American experience.

Following the assassination of Dr. Martin Luther King in 1968, Black students at the University of Arkansas formed the Black Americans for Democracy student organization and launched the BAD Times student newspaper when The Arkansas Traveler student newspaper failed to deliver fair coverage.

In the course, students had the opportunity to meet with Black activists – past and present – and to discuss their experiences and the challenges that the campus still faces today. Students were tasked with conducting their own research and identifying artifacts, collecting interviews, and exploring locations on campus that provided meaningful context for African American student experiences.

“With the energy Dr. Robinson brought to this class, I felt free to just speak,” said Honors College Fellow Terrell Page, whose project covered the formation of Black student organizations such as Omega Psi Phi. “I felt free to ask deeper and sometimes more trivial questions, half-jokingly, half-seriously — and halfway in standard English, halfway in AAVE (African American Vernacular English).”At the conclusion of the course, students Nate Cole and Sydney Nichols curated these experiences into an online tour that ranges across campus and through many years of campus life.

Entries cover historic moments such as the integration of university housing, the establishment of the first Black fraternity, and the tumult surrounding the removal of “Dixie” as a Razorback fight song. Entries also address recent instances of student experiences and protests, including the 2016 Razorback women’s basketball team kneeling during the national anthem and the #blackatuark Twitter campaign from summer 2020.

“Constructing the walking tour gave all of us an opportunity to explore neglected histories at the University of Arkansas, and I am thrilled to have been a part of rendering some of these stories more visible with the guidance of our dedicated teachers,” says Honors College Fellow Sydney Nichols, whose entry provided a critical lens on a former campus tradition, “Beat Texas Week.”

“It was really fun, educational and informative to learn about the history of the state of Arkansas, the University of Arkansas, and the people who made this place I call home a better one for all,” said Smit Patel, an honors biomedical engineering senior whose entry covers the 2016 kneeling of the Razorback women’s basketball team in protest before a game.

“It's important to know where we've come from, before and after the '60s," Provost Robinson emphasized. "The big questions for the course were partially answered by these students through these virtual entries. What are the lessons learned from the '60s and '70s, and how are they relevant today?"