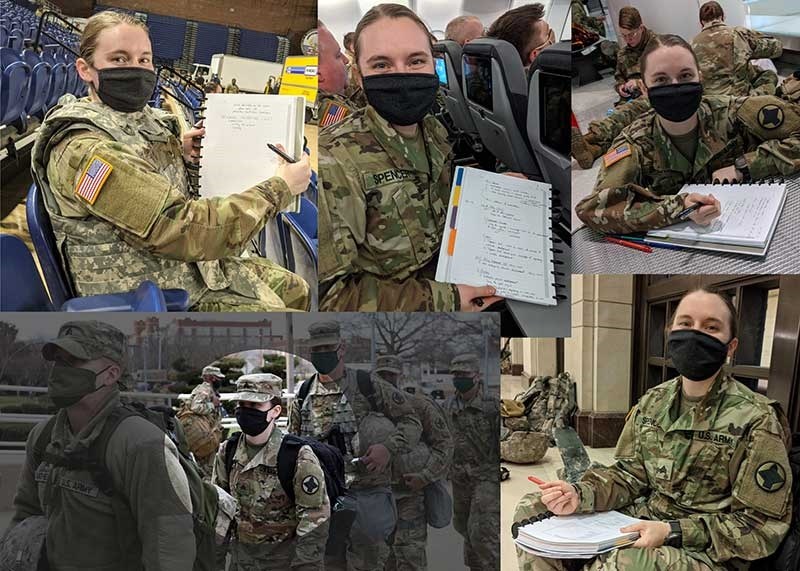 Clockwise from top left: Sgt. Samantha Spencer with class notes in a D.C. armory, on board an aircraft, at the airport and inside the U.S. Capitol. Bottom left photo courtesy of Sgt Dylan B. Parker.

The first week of class is always a time of transition as students finalize their schedules and teachers are settle into the new semester. Students and professors alike expect some uncertainty, but civil engineering senior Samantha Spencer received a unique notice the evening of Jan. 13 that completely changed her plans for the following three weeks.

Spencer is a sergeant in the Arkansas Army National Guard and was told, with less than 24 hours’ notice, to report to Fort Chaffee, just outside of Fort Smith.  Jan. 14, she was ordered to full-time status to provide operation support in Washington, D.C. during the 2021 inauguration.

The inauguration proceeded smoothly, and through it all, Spencer didn’t miss a beat in her studies, even logging on to lectures on her cell phone during her off time in the nation’s capital.

She said the experience was one-of-a-kind.

“While I never expected to be sitting inside the United States Capitol Building watching class lectures just hours after a presidential inauguration, being a part of this chapter of history is something I will never forget and will someday tell my family about as a distant memory,” she said.

Spencer, who plans to graduate in May, said she completed work while on breaks or while waiting for transportation around the city. She credited her classmates and faculty members with helping her stay up to speed.

“Balancing my coursework and my military duties was difficult most days as the situation in DC was sensitive and flexibility was needed in case of sudden changes,” she said. “I'm fortunate to have supportive instructors and friends who shared lecture notes and assignment instructions with me while I was on orders. The civil engineering faculty and staff were supportive and consistently offered help throughout my time away from campus and I want to take this opportunity to extend a thank you to all those who offered academic support.”

Andrew Braham, associate professor of civil engineering, said Spencer balanced it all well, and thanked Spencer for her service.

“Samantha showed her true character by not only being fully transparent with all of the teachers that she had class with, but keeping up with lectures while using only her cell-phone for WiFi,” he said.

“Samantha was very upfront about her situation, she was very clear in her communication, she was very accommodating in all of my requests, and she was very professional.  The first day back, before class started, she was already reviewing notes from the lectures she had watched,” Braham said.  “Thank you to Samantha for not only being an outstanding student and person, but for serving our country when it was in need.”

Spencer returned to Fayetteville on January 29, and had submitted all of her outstanding assignments by January 31.

“Samantha handed in the first two homework assignments the first day she was back and has been on time for every class since.  We had a nice chat about her time in D.C. and she was positive about all aspects of it,” said Eric Fernstrom, an instructor in the Construction Management program.

Other faculty praised her ability to balance such significant levels of responsibility.

“Samantha is and since the beginning has been an outstanding student,” said Rod Williams, clinical assistant professor of civil engineering. “She’s obviously a self-starter and excellent team player, as well as being proactive in her studies and life. We need a bunch of folks like this in the profession.”

Larry Lloyd, who is supporting Spencer on her senior design project, Findlay Edwards, associate professor of civil engineering, shared similar sentiments, praising her conscientious work during such a critical time in her academic career.

U of A Researchers will study how carbon dioxide ice pits have formed and evolved over time to gain an understanding of atmospheric dynamics of Mars.

U of A Wins National Bike Month Challenge; Key Indicator in Growth of Cycling Community

Members of the U of A community bounced back from lead shattering rainstorms to clinch the national bike month challenge. A group ride on Niokaska Creek Trail will be held at 4 p.m. today.

U of A researchers partner with NOWDiagnostics to conduct a study to evaluate antibody prevalence on campus using a new type of COVID-19 antibody test.

A small group of international exchange students who, by dint of motivation, studied on the U of A campus this spring are now headed home but with plans to return soon.

U of A Honors Mentor Teachers for Vital Support of Interns

Ryan Finley of Fayetteville, Nichole Paquet-Smith of Bentonville and Adriana Rivera and John Land, both of Rogers, were named mentor teachers of the year for 2020-21.