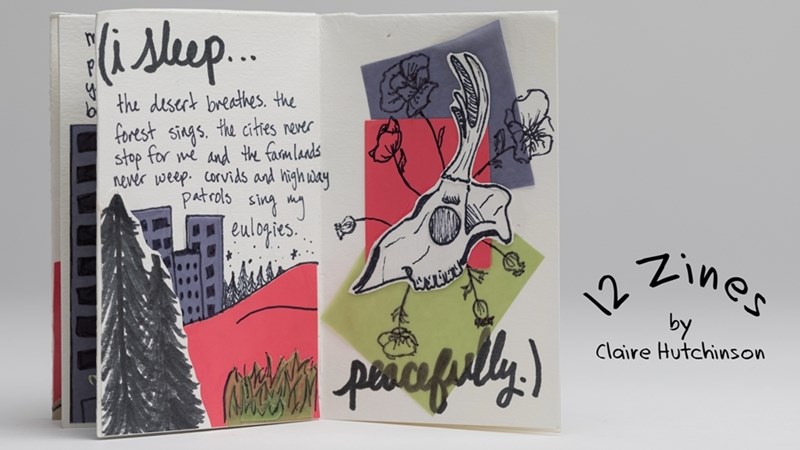 FAYETTEVILLE, Ark. – Senior honors creative writing and classical studies major Claire Hutchinson, from Kansas City, made her first one-page zine during her freshman year. The experience stuck with her, and when she found herself in a creative slump in 2019, she decided to give herself a year-long challenge to create one every single month.

"It kept me creative at least once a month for the whole year," she said. "It was a really cool experience, and I had a lot of people interested in following. I made copies for them and gave them away every month."

To create the zines, Hutchinson borrowed an exercise from an early creative writing class. It involved making month-long lists of her favorite words and experiences in a notebook and then constructing a poem around them at the end of the month in order to reflect her mood or "overall vibe."

"Some zines are exclusively art based, and I've also seen zines that are exclusively poetry," she explained. "I didn't want the zines to be plain and I do like creating art. I felt like I could merge the two fairly well."

Hutchinson's zines are now on display in Gearhart Hall. She is hard at work on her honors thesis, a poetry manuscript that incorporates zines and primarily centers on Greek and Roman myths. The project puts Hutchinson's classical studies major to good use and incorporates sundry artistic skills — including embroidering pomegranate seeds before cutting them out and stitching them onto the pages.

She said that the intricate artistry involved in creating the zines can sometimes complicate the writing part of it, particularly when it comes to receiving and incorporating feedback from her advisor Davis McCombs, director of the Program in Creative Writing and Translation.

"It's really hard because I like doing them all at once," she said. "I revise the poem itself and do a couple sketches, but other than that, I make them all in one sitting. That's some of the fun of it for me — figuring it out as I go. But I can't do that with my honors thesis."

Nevertheless, she's looking forward to completing her project with the help of McCombs, who is a renowned poet himself.

"I've never had someone who actually does poetry help me with the zines," she said. "I'm excited."