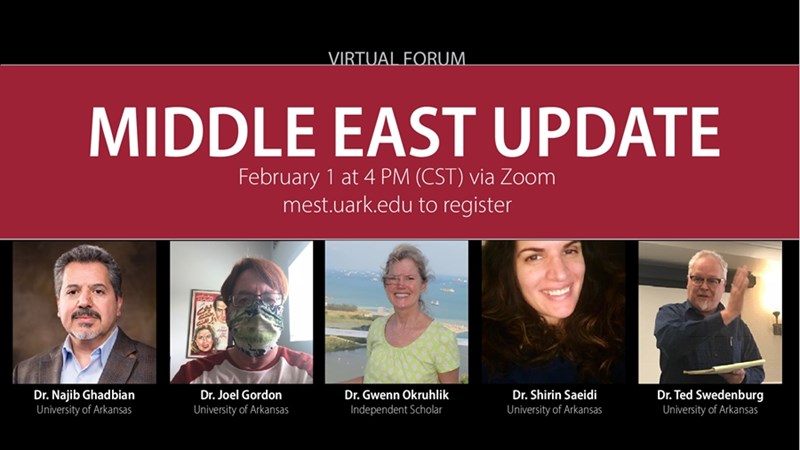 What has been going on in the Middle East in the last few months? Will things change with the new U.S. administration? What are the chances for a renewal of the Iran nuclear deal? Will Syria's President Bashar al-Assad survive? Will Saudi Crown Prince Mohammad bin Salman continue the war in Yemen? Can Egypt's President Sisi crush the coronavirus? Can the Palestinian Authority get serious peace talks back on track? For a discussion of these and other issues, please join us for a panel with experts on the Middle East based in Northwest Arkansas.

Joel Gordon, professor of history, is a political and cultural historian of modern Egypt and the Middle East. He teaches and writes about political change, the intersection of public and popular culture, historical memory and nostalgia, and religious and secular cross-currents, with emphases on cinema, music and mass media. Gordon also hosts Nadi Cinema, a film series at the U of A that screens movies from across the Middle East over a variety of genres.

Gwenn Okruhlik specializes in the politics of the Arabian Peninsula. She has worked in Bahrain, Kuwait, Qatar, Oman, the UAE and primarily, in Saudi Arabia. Her research is largely at the intersection of political economy and socio-politics. She is the founder and past president of the Association for Gulf and Arabian Peninsula Studies (AGAPS).  She has been senior researcher at the National University of Singapore and taught at Qatar University.

Shirin Saeidi is an assistant professor of political science. Her forthcoming book, Women and the Islamic Republic: How Gendered Citizenship Conditions the Iranian State, is due to be published by Cambridge University Press.

Ted Swedenburg, professor of anthropology and program coordinator for the King Fahd Center for Middle East Studies, is the author of Memories of Revolt: the 1936-39 Rebellion and the Palestinian National Past and co-editor of Palestine, Israel and the Politics of Popular Culture.

This forum is presented by the King Fahd Center for Middle East Studies at the University of Arkansas.