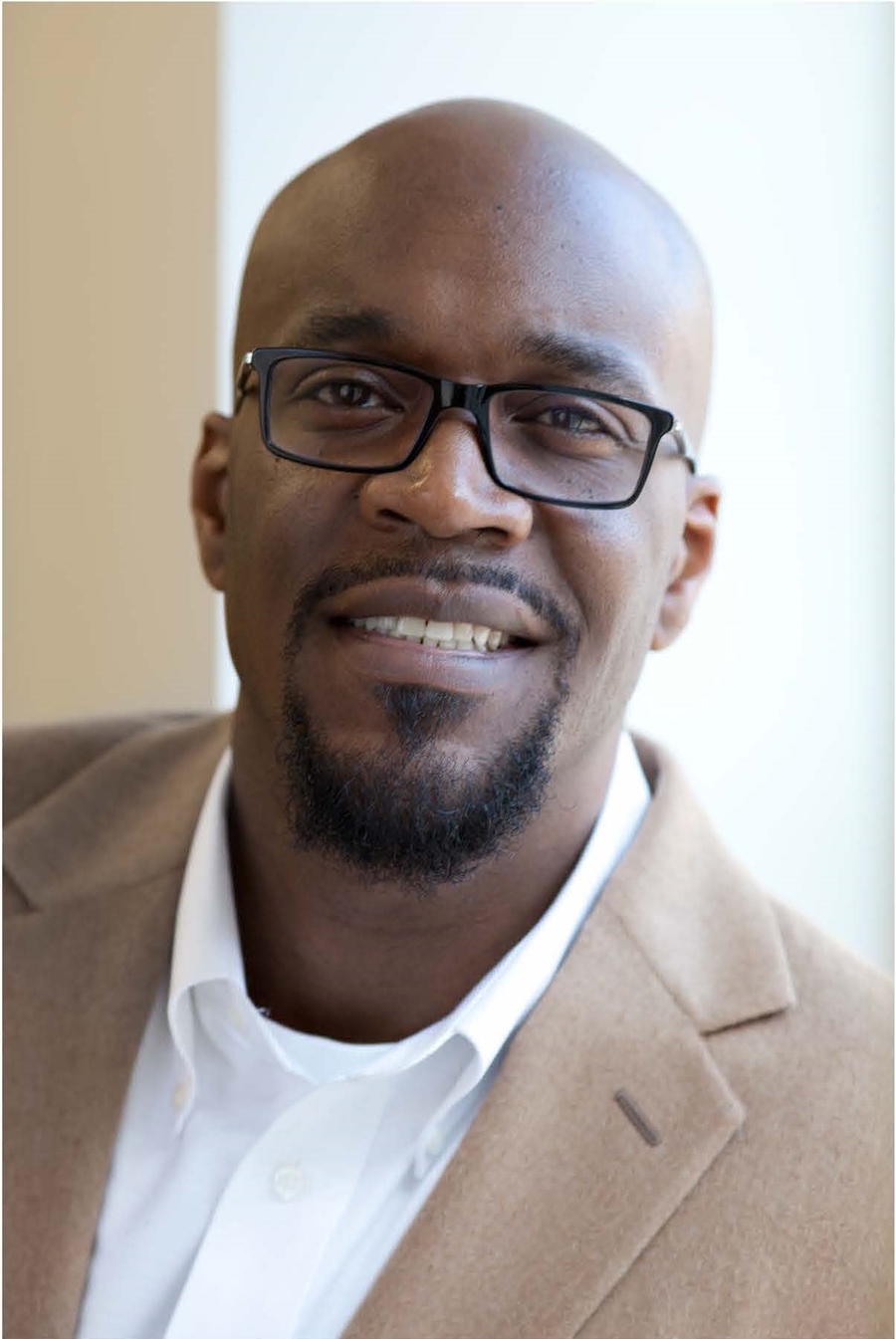 Dr. Alphonso Walter Grant, School of Art endowed assistant professor of art education and affiliate faculty in Fulbright College of Arts and Sciences' African and African American studies, political science, and gender studies programs, 50, passed away in December due to a heart attack at his home in Fayetteville.

He was a beloved son, brother, uncle, friend, scholar and educator, who has forever changed the lives of those he touched with his exceptional intellect, passion, leadership in diversity and love he shared for family, friends, colleagues, students and life.

"We are just devastated by this loss," said Todd Shields, dean of Fulbright College. "Alphonso was a passionate educator, advocate and mentor to so many of our students — not only in the School of Art or our college, but across the U of A and throughout our community, too. We will miss him and the brightness he brought to our world in immeasurable ways."

"Dr. Grant was a former student, colleague and friend," said Stephen Carpenter II, dean of Penn State College of Arts and Architecture. "He loved to learn, to question, and to discuss and debate with anyone willing to think critically and passionately. He had many plans to pursue and many answers to question."

"He was innately an historian and an educator who came to the field of art education with a scholarly determination to call out injustice and inequity conveyed through conventional research and teaching practices about the lives and experiences of African Americans," Carpenter added. "His family, friends and students know the energy and passion he brought to everything he did. I will miss him dearly."

Dr. Grant was a scholar who shared his aptitude in many ways. He was a research associate and qualitative analyst for Rankin and Associates Consulting, Inc. He served on the editorial review board of the Art Education Journaland International Journal of Education and the Arts, Journal of Curriculum and Pedagogy, and the Journal of Cultural Research in Art Education. He was also a guest reviewer for the Journal of Cinema and Media Studies.

Most recently, he was selected to be the western regional director for the Higher Education Division of the National Art Education Association. He was also recently elected to serve on the editorial review board of Studies in Art Education

"Dr. Grant never stopped searching for ways he could further his own education and bring what he learned to his students, faculty and peers, as well as using his learnings to spur national and international conversations with tenacity," said Gerry Snyder, executive director of the School of Art. "Alphonso Grant epitomizes the faculty we seek to shape a new generation of artists and educators. With each step we take into our future we will honor his legacy and continue the important work he dedicated his life to do."

Dr. Grant had a proven commitment to interdisciplinary and transdisciplinary ways of knowing and representing key issues and aspects of the world, grounded in diversity, equity, inclusion and dismantling anti-Blackness.

He was a scholar and valued contributor to many academic disciplines, both utilizing and contributing to theories of Africana studies, Black existentialism, critical pedagogy, critical race theory, curriculum theory, pragmatism, queer theory, racial identity politics, semiotics, the brother on the down low and visual culture studies. His perspectives and scholarship in art education were critical to the destabilization of Eurocentric and heteronormative discourses in the field of art education.

Art education program director Angela LaPorte describes his accomplishments as many. Dr. Grant was a W.E.B DuBois scholar, he was selected as a recipient of the 2014-15 Harold F. Martin graduate assistant outstanding teacher award, and as a recipient of the 2016 Academic Achievement award for The Presidents Commission on Lesbian, Gay, Bisexual, Transgendered and Queer Equity Group at Penn State.

He presented research at national and international academic conferences, gave keynote addresses and served on numerous panels which centered the effects of whiteness on Black Americans in educational and community settings.

"Whether it be on an international stage or in a classroom, Dr. Grant's call to transform misrepresentations of race, gender, class, sexual orientation and socioeconomic status, remained the same and had the ability to reach your intellect at the same time reaching into your heart," said Marty Maxwell Lane, associate director of the School of Art and associate professor of graphic design.

As a scholar, Dr. Grant established a consistent and impactful record of single-authored and co-authored book chapters and journal articles related to how the arts can function as a white supremacist master narrative through rhetoric, visual representations of race, power, privilege and the role curriculum plays in the development and sustainability of racial inequity.

He lived with the passion to challenge how individuals understood themselves, related to others and interacted with the world. His professorship was a lifestyle. He created teachable moments whether in school or in the community. His students were changed by his work and teaching methods.

"Dr. Grant gave everyone in the room a chance to talk, or, at times, called you out," said Shelby Fleming, Master of Fine Arts graduate alumna. "Not because he didn't have anything to say, but because everyone mattered to him and he wanted to make room for all voices to be heard, not just those of privilege."

Fleming said learning and working with Dr. Grant made her voice stronger and validated her views, and that she knows many others now carry that same power because of him.

"He instilled the confidence to own all aspects of ourselves and make our voices heard," Kai said. "He created a safe space for everyone and in his classroom, you knew he saw you, he heard you, you matter, and your experiences are valid."

Dr. Grant led a life of service and made a lifelong impression on the students he mentored within the School of Art, across campus, and for the Black male athletes for the University of Arkansas' Athletic Departments' iBelieve Initiative.

One of the students he mentored was Tay Butler, a School of Art student in the Master of Fine Arts program. Butler shared how Dr. Grant gave him a 10-book reading list at their first meeting before he even began the program, and said this small gesture helped influence his decision to attend the U of A.

Once he arrived on campus, Dr. Grant gave Butler another five books to read and told Butler he should be finishing a book every three days. Butler said this challenge gave him a new commitment to reading, and changed his behavior codes, habits, thinking, and what he viewed possible for Black people.

"It is no hyperbole when I state that Dr. Alphonso Grant is the biggest influence on me and my graduate experience thus far," Butler said. "Dr. Grant opened my mind in a way that transcends artmaking. He challenged me to dig deeper and never be satisfied."

"We argued about politics, relationships and whether R&B is better than Hip Hop," Butler added. "But when all was said and done, he was in my reviews championing my work with an incredible balance of critique and confidence that my work needed. I will never get over this loss, my heart goes out to his family and everyone else he has touched."

Dr. Grant was also a cherished diversity leader with the University of Arkansas Vice Chancellor's Office for Diversity, Equity and Inclusion and was active with the diversity committee within the School of Art. He held the positions of chair of the College Cabinet for Fulbright College and vice chair of the Faculty Development Committee since fall 2019.

"Dr. Grant's commitment and active determination to advance a more diverse, equitable, and inclusive campus culture and climate and his passion for mentoring students and championing change will be forever remembered," said Yvette Murphy-Erby, vice chancellor of the U of A's Office for Diversity, Equity and Inclusion.

"While his time with us is shortened and his absence presents a major and devastating loss for our campus community, he leaves a meaningful legacy as the impact of his contributions will carry on," Murphy-Erby added. "Dr. Grant was indeed a change agent and a difference maker!"

Dr. Grant served on the U of A's Faculty Senate and as chair of the Curriculum Committee for the African and African American Studies Program for the last two years. He was also a consultant for Art Ventures' Underground mural projects, representing African American histories in communities throughout Northwest Arkansas.

"The world is a little less bright with Dr. Grant's passing," said Pearl Dowe, a former colleague of his and professor of political science and African American studies at Emory College of Arts and Sciences. "I deeply admire Dr. Grant for overcoming his own personal trials, his courage as a Black man to pursue the field of art education, and his incredible generosity. May his work and light shine through the lives he touched."

"Dr. Grant's transdisciplinary research, leadership in diversity, selfless mentoring, and teaching have been critically pertinent to transforming misrepresentations of race, gender, class, sexual orientation, socioeconomic status, and other identities," she added. "He has made a positive impact locally and nationally that will always be remembered."

In lieu of flowers, the family requests donations to be made to a memorial fund organized by Dr. Grant's peers and colleagues. The School of Art plans to create a memorial scholarship in the name of Dr. Alphonso Walter Grant, and more information will be provided at a later date.

Details of a memorial service will also be made available at a later date.