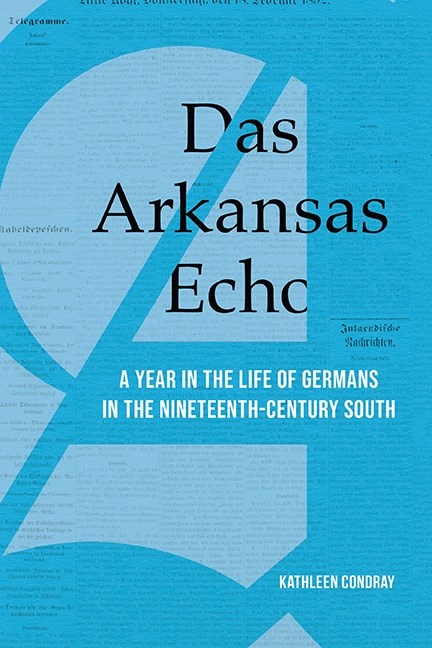 FAYETTEVILLE, Ark. – The University of Arkansas Press’s newest publication, Das Arkansas Echo: A Year in the Life of Germans in the Nineteenth-Century South, goes back in time to understand the lives of Germans living in Arkansas during a post-Civil War era through the lens of a German-language weekly newspaper from that time.

The new work, authored by U of A’s Kathleen Condray, associate professor of German, is a study of the topics covered by the German-language newspaper, Das Arkansas Echo, which served Arkansas’ German immigrant community in the late 19th century.

While shedding light on how German immigrants in Arkansas navigated their new identity as southern Americans, Condray illuminates the newspaper’s crusade against Prohibition, its advocacy for the protection of German schools and the German language, and its promotion of immigration.

Readers will also learn about aspects of daily living, including food preparation and preservation, religion, recreation, the role of women in the family and society, health and wellness, and practical housekeeping.

The stories that were published in this weekly newspaper also show how German speakers navigated civic life outside their immigrant community, including the racial tensions of the post-Reconstruction South.

Condray is the author of Women Writers of the Journal “Jugend” from 1919–1940, and has published numerous articles on migration and national identity. She is the recipient of two Fulbright awards, an NEH grant, and several national teaching awards.

The book is currently available anywhere books are sold. Fayetteville residents can arrange a free direct pick up or delivery in Fayetteville by calling the Press at 479-575-7715.