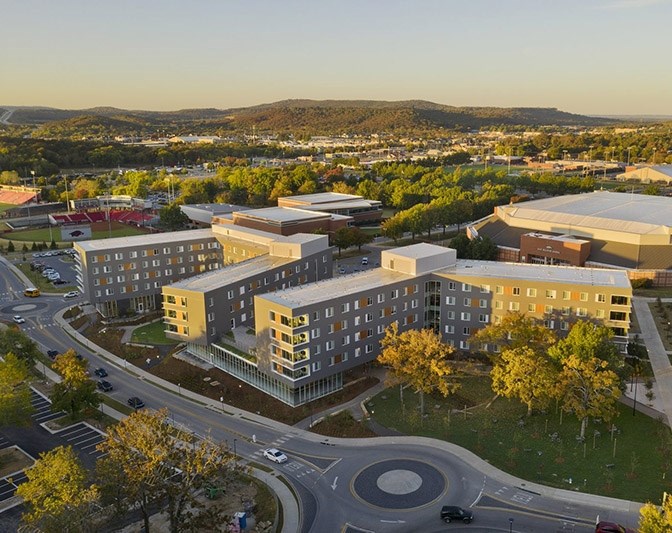 Adohi Hall at the University of Arkansas in Fayetteville received a 2020 Honor Award from AIA Arkansas, the Arkansas Chapter of the American Institute of Architects.

Faculty and alumni of the Fay Jones School of Architecture and Design at the University of Arkansas were recently recognized with awards from the Arkansas Chapter of the American Institute of Architects.

Design awards and other awards were announced during the 2020 AIA Arkansas Virtual Design Awards on Oct. 19. Projects by Fay Jones School faculty and alumni won three Honor Awards and one Merit Award in the Design Awards program — plus the People's Choice and Members' Choice Awards. This year, the jury selected the winners from 33 design entries submitted by member firms.

Adohi Hall is a 202,027-square-foot sustainable residence hall and living-learning community at the U of A, as well as the nation's first large-scale mass timber project of its kind. An emphasis on nature resonates throughout the project, with exposed structural wood ceilings and wood columns present throughout the building. A serpentine band of student rooms defines three distinctive courtyard spaces that create a dynamic environment for interactive learning in architecture, design  and the arts. Integrated into the topography of its site, Adohi Hall features a cascading series of outdoor spaces with sinuous pathways intricately woven through existing stands of mature oak trees.

Along with a new Innovation Lab nearby, the Lamplighter School Barn is a critical piece of the new campus master plan and reflects the educational values and vision of the school, which focuses on engaging students with their surroundings and inspiring them to explore. The Red Barn classroom facilities provide creative outlets for learning and entrepreneurship situated in the landscape of the campus. The barn has a spacious interior classroom that gives way to an integrated chicken coop and run, providing elementary students with the opportunity to operate a small, functioning farm.

The Thaden School Reels Building transforms the simple, vernacular form of a poultry house into a spacious, light-filled academic building through subtle shifts in plan and section. The Thaden School is a new independent middle and high school that is endowed and structured to allow students from all socio-economic backgrounds to attend. Bifurcated to become a "Y" shaped plan, the Reels building has a predominantly east-west orientation. In the center of the building, a large, covered breezeway connects the three wings, providing space to gather and have outdoor classes. The faceted, folded form provides each space with its own sectional character with ever-changing light conditions, reaching out to the landscape and bringing in the sky.

The design Merit Award was given to the Miller Creative Quad in Conway, designed by Polk Stanley Wilcox Architects. The project also received the Members' Choice Award, which is voted on by AIA Arkansas members.

The Miller Creative Quad is a mixed-use building on the Hendrix College campus that integrates student housing with music, theater and gallery space. Replacing Hulen Hall, a historic dining hall in the middle of the campus, the design of the new building reveals an open ground plane with an internal courtyard that invites engagement with and passage through for campus students and visitors. Hulen Hall's historical significance and campus legacy live on through strategic repurposing of recognizable elements of the building - its original clay tile roof was repurposed to serve as the exterior cladding for the south music wing, while the recognizable patterned aluminum panels from the original dining hall were installed as a decorative filigree below the light-changing, translucent soffit of the art gallery.

The People's Choice Award, which was voted on by the public, went to the Ignite Professional Studies Center in Bentonville, designed by Hight Jackson Associates.

The Ignite Professional Studies Center was designed to bring together students in each of the eight career strands of Bentonville Schools' Ignite Professional Studies program to give them spaces designed specifically for their needs. The spaces were designed to feel more like the clean, modern office settings where students intern - rather than a traditional school setting -with storefront windows, soft gray vinyl plank flooring, hexagonal textured carpet tile, colorful furniture and contemporary lighting.

Adam Day, AIA, LEED AP, was honored as the Emerging Professional for AIA Arkansas. The award is intended to recognize a new professional, practicing for 10 years or less, who has expanded the role of the architect through civic participation and professional mentorship.

Day's career has taken him from Fayetteville to Fort Smith to Chicago, and he now calls Little Rock home. He joined AMR in 2014 and became the managing partner of Design and Technology in 2016, implementing strategies within the firm that seek to create better value for clients and elevating design in the firm. In addition to his career, he has proven himself to be a results-driven leader, serving on the AIA State Board, the AIA Emerging Professionals Committee and the AIA Arkansas Convention Committee. He is also the creator and producer of the Emerging Professionals Pecha Kucha Night, one of the AIA Arkansas Convention's signature events for the past five years. Since moving to Little Rock in 2014, Adam's passion for design and business evolved to include development. Personal projects include renovating his family's first home, repurposing a 19th century church into what is now Bark Bar (Arkansas' first off-leash dog park, bar and restaurant), and designing and building the Days' new home in North Little Rock. His current venture is as part of the development and ownership team behind the mixed-use development 1424 SoMa. Day and his wife, Amanda, have one daughter.

Randy Palculict, AIA, LEED AP BD+C, was honored with the Dick Savage Memorial Award by AIA Arkansas. This award was given to recognize a member of the Arkansas Chapter who has made notable, significant contributions to AIA Arkansas and the profession.

Palculict has served the AIA, and the profession at large, since entering practice nearly 20 years ago. His service to the chapter includes 10 consecutive years serving on the AIA Arkansas Board of Directors from 2009 to 2019, including serving as president in 2018. Palculict's service to the profession and community include co-founding the Emerging Green Builders, volunteer work for Arkansas Children's Hospital Foundation, volunteering for the Architecture and Design Network and membership on numerous AIA Arkansas committees. He is currently serving as Secretary on the STEM Coalition Board of Directors. Palculict always aspired to design and construction of the built environment and majored in civil engineering for three years before enrolling in the School of Architecture at the University of Arkansas. He graduated with a Bachelor of Architecture in December 2002 and moved to Little Rock, where he began his architecture career. He began working at Brooks Jackson Architects in January 2003 and continues to practice at the same firm, now named Jackson Brown Palculict Architects. Palculict and his wife, Desiree, reside in Little Rock and have one daughter.

Carl Smith was honored with the Award of Merit by AIA Arkansas. This award recognizes an individual, public official, member of any allied profession, public agency or company that has contributed to the dignity and value of the architectural profession.

Smith's work focuses on the intersection between anthropogenic landscape and urban change, and the values and beliefs of those affected. Ultimately his twin aims are to instill and sharpen a sense of place-consciousness within himself and his students, and to understand place-consciousness as it relates to the sustainability and resiliency of landscapes and cities in Arkansas and beyond. For 13 years, since relocating to the state from the United Kingdom, Smith has contributed to the preparation of landscape architects, planners and architects across Arkansas and the nation. His studio teaching has garnered a number of awards for his students and himself, including the Council of Educators in Landscape Architecture Excellence in Studio Teaching Award. Smith has also served as a visiting professor or critic at a number of design institutions domestically and internationally, while his scholarship has received a number of national and international awards and been recognized through appointments at the Dumbarton Oaks Research Center and Library at Harvard University, and the British School at Athens. In 2019, he was elected Fellow of the Royal Society of Arts in London. These experiences are folded back into his teaching, research and service in and for Arkansas.