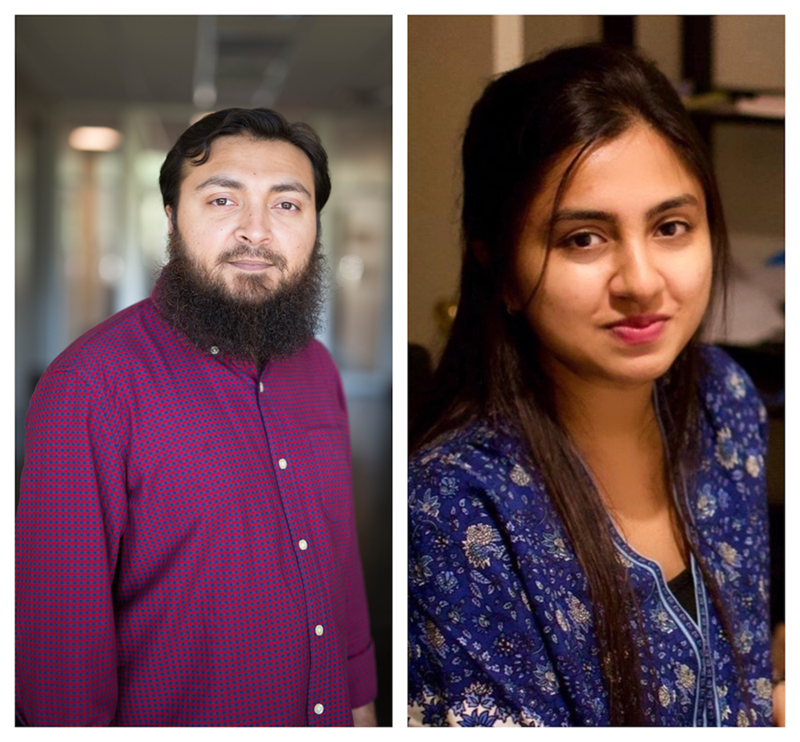 Riya Paul and Affan Abbasi earned the best presentation and best poster awards, respectively, at the International Microelectronics Assembly and Packaging Society (iMAPS) 53rd Symposium on Microelectronics. The students were honored for their work to make electronic devices more compact and efficient.

iMAPS is considered "the largest society dedicated to the advancement and growth of microelectronics and electronics packaging technologies through professional education," according to the society's website. The 2020 international symposium was held online because of COVID-19.

Paul received first place in the iMAPS 2020 Symposium Best Student Presentation competition for her work on the thermal benefits of using the novel material thermal pyrolytic graphite, known as TPG.

"TPG has an extremely high in-plane thermal conductivity, which directs the heat generated by the high-power devices towards the power module cooling systems," Paul said. "It reduces the junction temperature, so the power density can be further increased. In day-to-day applications, the sizes of the power modules and hence the end applications like the inverter's volume will reduce."

Paul used both simulations and experimental analysis to study samples of the unique material as part of her study.

Abbasi earned first place in the iMAPS 2020 Symposium Best Student Poster competition for his work on a gate driver design in state-of-the-art Silicon Carbide 1 µm CMOS technology node and integrating it inside the commercial power module to increase the power density.

"This type of research would help companies make compact power systems with better efficiency," he said. "For example, for an electric car, you can have a large power system with better efficiency, but it would be massive, and that weight would add to the overall weight of the car. And due to the massive overhead, the overall performance of the vehicle would degrade."

Abbasi said his research could reduce the cost and area consumption. His work was conducted under the ARPAe CIRCUITS program.

"The work done here is new and has tremendous operational benefits for the power module packaging developers for numerous applications like motor drives," Paul said. "So, it was important to publish it for further work on it."

Paul said she's thankful to Fang Luo, her former mentor and advisor, and her colleague Amol Deshpande and Wei Fan, from TPG supplier Momentive, for their support and encouragement toward publishing her work.

Abbasi said the award meant a lot to him, and he's excited for the future.

"This award confirms that I am doing good work," he said. Affan said he's grateful to Asif Khandoker for his help in the presentation.

Abbasi and Paul are both researchers in the UA Power Group, a multidisciplinary group of researchers working to deliver next-generation electronic vehicles, renewable energy systems, grid infrastructure, and cybersecurity.